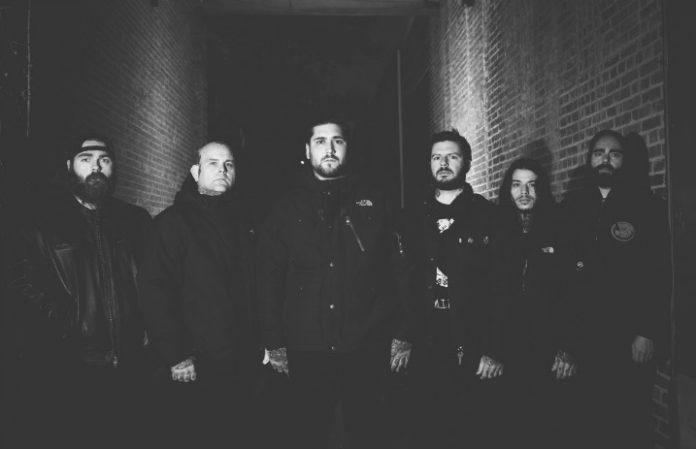 This past year has made it difficult for many artists to ignore politics, racism and other various injustices that have been viciously perpetrated and highlighted by the dialogue of the country and its political figures. Fit For An Autopsy join the conversation with their new record, The Great Collapse (out March 17 via eOne/Good Fight Music), and their first single and music video from the album, “Heads Will Hang.”

Read more: “When do lyrics stop being entertainment and start becoming mind altering?”—Fit For An Autopsy Op-Ed

“The band travels all over the world,” guitarist Will Putney starts, “and you get a different view of America when you’re not here. When you’re in other countries, they report news globally and people are a little more aware of what’s happening in some of the Third World countries; when there’s insane regime changes and there’s oppression and there are these refugees that are displaced and you have millions of families whose homes are destroyed, who have literally nowhere to go,” he explains. These are issues that the majority of America is faintly aware of, somewhere in the back of their minds. But how many of us actually pay attention? How many of us can say we’re aware of the world outside of ourselves? This is the point that FFAA want to make with “Heads Will Hang.”

“There seems to be more sympathy for issues like this outside of America,” Putney continues. “There was a lot of talk this year with the election about the refugees and the problems they’d cause in our country. The song ‘Heads Will Hang’ [is about how] we don’t really notice how serious some of these problems can be in other countries until it happens to [us]. The concept for the video tells the story of a happy American family that’s then put into that situation where they’re displaced by a war. It sheds some light on the realities of it like, ‘What if this happened at home? How would this affect you? How would this affect your family?’ That’s an eye-opening thing, to put yourself in someone else’s shoes.”

His sentiments and questions must not fall on deaf ears. With Donald Trump’s inaugural address came the announcement, “From this day forward, it's going to be only America first.” Some say this approach is practical and patriotic, while others denounce Trump for his dangerously isolationist ideologies. “There’s nothing wrong with supporting your country,” Putney admits, “and wanting to succeed and be a powerful, respected nation in the world. But I think part of that is also having empathy for other nations. [‘America first’] is not going to get our country ahead in the eyes of the world. If anything, it’s just going to be more damaging.”

The Great Collapse confronts these global concepts and others, like the threat of global warming and how we as people relate to the world around us. One song, “When The Bulbs Burn Out,” even borrows a sound bite of Leonardo DiCaprio’s 2014 speech at the United Nations Climate Summit. The actor’s words heavily influenced Putney during the writing process of the new record. “I really respect him for the platform that he has,” the guitarist says, “being such a worldwide figure, to go out there and make that documentary [Before The Flood] because he’s got a great life and doesn’t have to deal with this shit. Peers in his world never get that close to real issues and addressing our government. I had a lot of respect for him when I saw that, and I think he really nailed it on what a lot of the problems were and trying to make a wake up call for our country to pay attention.”

There’s no doubt about it: This record is a hefty one. However, it is also the most dynamic and intriguing record FFAA have recorded to date. The Great Collapse features the same kind of brutality fans have grown accustomed to hearing from the band, but also introduces some more atmospheric, brooding elements that make the record not just loud, but touching. This is not just a listener’s opinion, but the opinion of Putney and the rest of the band members, as well.

“On [Absolute Hope Absolute Hell] we branched out into new territory for the band,” he explains, “moving a bit away from the same trick [and] formula in every song and introducing more of a moodier, dynamic feel to the album as a whole. It was received very well, so we approached this one more like, ‘Let’s take that full on and let’s have songs be really drastically different in their approaches.’ The idea that we had started last time now feels fully realized. I feel like [The Great Collapse] is the most complete, grounded album that we have.”

This kind of writing not only makes for a great listening experience, but it also stands to push the band further along their desired path of not falling into what Putney calls “cookie-cutter” deathcore. “We’re trying to carve our own path in our genre,” he says. “We get constantly labelled a deathcore band a lot—and there’s nothing wrong with that—but there’s a stigma to that genre that it’s all sort of cookie-cutter. Part of growing as a band in this day, especially in our scene, is to try to do your own thing. More so than ever, I feel like we achieved that.”

Even the record’s album art has a story all its own. Beautiful yet apocalyptic imagery burns on the cover, and the origins of this idea can actually be traced to Buddhism. “It’s very loosely based on the Buddhist Wheel Of Suffering,” Putney elaborates. One of Buddhism’s core principles is the concept that all life is suffering. They call this Dharma. One can free oneself of worldly suffering by reaching a state of enlightenment. However, FFAA use this symbol to illustrate the troubling state of the world. “The idea was to sort of borrow some of the imagery and meaning behind it and apply it to modern times. It tells the story of the creation of the world to how we’re destroying it.”

While The Great Collapse covers topics ranging from politics, capitalism and the environment (even the North Dakota pipeline issue), Putney makes it very clear that it is still very much about the individual. “There are some songs that take a more personal reflection of yourself and being in a world like this; what it turns you into,” he shares. “We don’t solve the problems and don’t claim to know how to solve the problems. You don’t get a positive result in our lyrics. We just write about how it makes us feel and what we think is wrong. I think the first step to solving a problem is pointing out that there is one.”

Fit For An Autopsy will be on the Carry The Flame tour beginning February 22 with the likes of Invent, Animate, Fit For A King, Emmure and After The Burial. Check out their new single and a quote about the video's concept from Putney below:

“People in the United States always seems to form these really strong opinions about war, refugees, and other crisis situations in Third World nations without really having the perspective of what's actually happening there. Everyone's guilty of it to some extent; a lot of us live very privileged lives in comparison to other pockets of the world, where the basic comforts like clean water, power, shelter, and safety are not guaranteed.

“The concept behind the song/video was to set a scenario in America where a normal happy family was placed in a similar extreme situation, in the hope that it creates a certain feeling of empathy for what less fortunate nations are experiencing right now. And to shed some light on just how close we are to the same tragedies hitting our homes.”