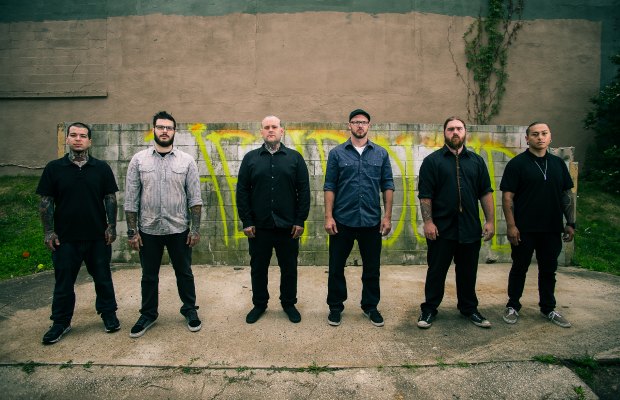 By: Patrick Sheridan, guitarist of Fit For An Autopsy

In a world filled with pop stars gone bad, drug abuse and overdoses, sex tapes, hate crimes and a truck load of murders every year, you would think that censors and conservative parental units would be less worried about lyrical content in today's music, even though it seems to be a hot topic and always has been. Being in a metal band, it's easy to become numb to the horror-filled, over-the-top, shock value of the words and just fall into the music because it moves me. So I did my best to step outside my mind and look at things from an outside perspective.

The metal world has always been about, for lack of a better term, “scary things:” dragons, devils, Satan, death, war and all of the other things that go bump in the night. So when songs about murder and worshiping the dark one are spilled out of my speakers, it's just a typical day. This leads me to the question: When do lyrics stop being entertainment and start becoming mind-altering? It's a touchy subject, but I think it is a real topic up for fair discussion. A lot of people would say it isn’t the artist’s responsibility to worry about what someone takes from their art. But what if the artist is manipulating the art he or she creates to purposely shock or disturb the listener? Does this give the artist more responsibility?

The blame can’t be put on the artist for creating art. The whole “art is in the eye of the beholder” and “freedom of expression” protects an artist from responsibility at that point. True artists can’t help but create what they see inside of them; they care not what it’s worth or what people think. However, if you are spending more time thinking about the reaction to your art, instead of the creation of it, then you are no longer an artist. The manipulation of art for reaction and sale, to some degree, can make the artist somewhat morally responsible for what they produce.

I remember growing up in Edison, New Jersey, and hearing about a teen suicide being linked to Ozzy Osbourne's “Suicide Solution.” It was so overly sensationalized that it surely helped promote the record and increased sales—as scandals usually do. Can Ozzy be blamed for his lyrics, citing a taboo topic and expressing his personal opinions through his music? Is it freedom of speech or the “sex sells” approach to marketing? Then there is the other side of the coin, the preachy overrun religious side of music. There is a new breed of music carrying a higher power as its selling point, to send a “positive” message. Yet sometimes this message gets blurred and personal views are pushed to the front of the line and mixed with the message of God. It's all marketing to a degree. When is it too much for a young listener to weed through the madness and form a real healthy opinion?

There is no question that celebrities use the media to push their careers to the next level. In the heyday of pop culture, the truly talented got the prize, but now it seems like the artist with the most media coverage (good or bad) makes the money. With lyrics being one of the first things people connect with upon hearing a song, it's easy to see why artists choose the shock appeal route. We are far gone from the days of young girls fainting over a sway from Elvis' pelvis, and we are much more into the days of Miley Cyrus' onstage display of strange sex on national television.

I can't say I agree with the messages in all music, with lyrics like “Ask your girl what my dick tastes like” (Emmure) replacing lyrics like “Daddy watches porno now that mommy's not around/She used to love her heroin but now she's underground” (Guns N’ Roses). They both hold shocking messages, but which is a social commentary and which is just a stunt to attract attention? Women are objectified, threats are made, violent rape and murder are glorified, and all the while we sit at the edge of our seats like we are waiting for the car crash to happen, never once blinking or looking away. Waiting for the images to burn into our gray matter, forever changing how we view the world.

There is no clear answer when it comes to art and who is responsible. Parents are leaving their children to be raised by TV and after-school programs, so music is a great scapegoat when a teen lashes out or takes his or her own life. Maybe factors from each side could combine to make a truth, but I'm sure I'll be in line at the local record store when the next big thing rips our retinas open and spills its images onto us. Let's just hope it's worth the chaos.