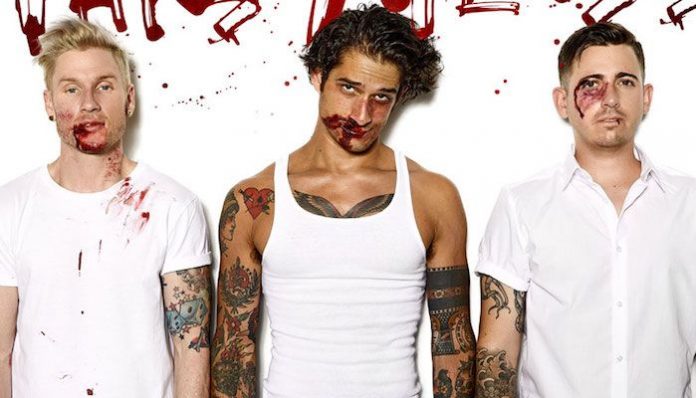 Actor Tyler Posey entered the pop-punk sweepstakes three years ago with a band of buds called PVMNTS, but after releasing a single EP, he left the group. Posey still had unfinished rock business to attend to, so he enlisted his longtime confidant Kyle Murphy on bass and Makeout drummer Scott Eckel to create Five North.

Five North’s first track, “This Mess,” straddles the line between bouncy pop-punk joy and darker alt-rock. The hooks are still there, but there’s a smidgen of madness that reflects the song’s angst quotient. It’s all part and parcel for Posey who was looking to flex his musical prowess and follow a different creative path. Having aligned Five North with producer John Feldmann’s new imprint Big Noise, Posey and his friends are looking to carve a bigger groove in the current rock landscape than what he’s previously done.

Now, with tomorrow’s release of the eight-song mini-lp Scumbag, the trio are ready to show the world how they roll.

In October, members of Five North sat around Murphy’s phone to explain to AP the band’s origin, how Posey left things with his former PVMNTS bandmates and what he wants to do with Murphy and Eckel, even if it makes scents.

Scott, you’re rebooting Makeout. Where do you have time to start another band? Are you a workaholic?

SCOTT ECKEL: Not really. I just like to be doing stuff. I’m going to work as much as I can for as long as I can. With Makeout, we were working with John Feldmann. It was during a show [in Australia] with his band Goldfinger, [and] I hit him up and asked him, “I want to play more music. Do you know anyone?” I went to the show, and out of nowhere he just goes, “Five North.” I said, “I’m in.” I was immediately in. We tried to call Tyler at 3 a.m. He didn’t pick up the phone call. He ignored it…

TYLER POSEY: I was actually in Canada filming a TV show when I got the phone call from Feldmann and Scott in Australia. I woke up, [and] I ignored it. I said, “Fuck you, Feldmann,” and I went back to sleep.

ECKEL: And then Tyler was in the country two weeks after that. We hang out once, got some beers…

POSEY: A lot of beers…

ECKEL: And then he asked me to do it three days later, and I was in the states a week after that. That was in April. Two weeks later, I was in L.A. recording the songs, immediately.

Kyle: You and Tyler have been BFFs for a while now, and you were involved in PVMNTS. What do you think the big difference is between the two bands?

KYLE MURPHY: We’ve been friends for over 15 years now. We grew up with each other in the same town. We’ve always played music [and] jammed together. I was a tour manager and photographer for PVMNTS, as well.

I’m assuming you like the same stuff. If you were on a cross-country drive, what would you be jamming out to?

MURPHY: First of all, probably blink-182. NOFX. A little bit of Rancid.

POSEY: Some jazz or a little classical every now and then. A lot of standup comedy, a lot of cigarettes, a lot of Joe Rogan on the podcast. A lot of farting and then trying to hum the same tune of the part that just came out of your butt. That’a fun game.

Five North feel like a good situation for you, Tyler. You’ve got your right-hand man on the one side, and then you’ve got a dude who wants the opportunity to play and wants to do the best for the whole unit. Straight up, what do you think this band are capable of that PVMNTS weren’t?

POSEY: It was nice hopping into the rehearsal space with PVMNTS because I was close with those guys. We had a pretty good writing chemistry for the most part. I think we were pretty strictly pop punk and really wanted to mainly focus on that. With Five North, we’ve dropped that feeling, and we don’t really have any real roots in what we see ourselves as. We just write whatever we want to in the studio. And I think that mindset really does open up a bunch of different possibilities, whether it’s having a song on the radio or playing some award show or being able to branch out of the pop-punk world a bit. That’s what we grew up on. That’s what’s in our blood and runs through our veins. You know, [we’re a] pop-punk based band, but we do like to mess around with different ideas.

We’re still working on it though, man. We haven’t played a live show except for my brother and a couple of friends in the rehearsal space. There’s this immediate—I don’t know how to say this without it sounding too hippie—electric energy that is palpable. You can taste it, and it’s thick in the air. And it’s not just the farts, you know? ALT