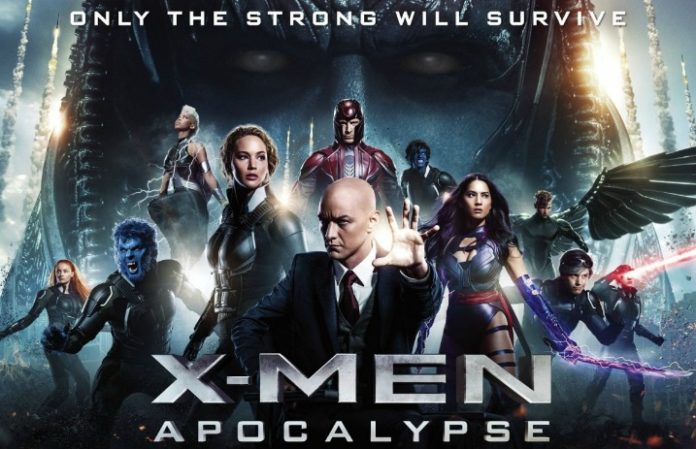 Captain America: Civil War just crushed the box office over the weekend and rightfully so, as by most accounts it’s one of the best superhero movies ever. North American journalists were treated to the first press screening of X-Men: Apocalypse last week and reviews began hitting today; the earliest reviews are decidedly mixed (“X-Meh”) and that’s undoubtedly due to an overabundance of characters, another “world domination” plot with echoes of 9/11 in the set pieces and the increasingly confusing X-Men franchise timeline. If you need a refresher: the timeline was originally muddied by X-Men: Days Of Future Past, hilariously lampooned—and simultaneously made sorta irrelevant—earlier this year in Ryan Reynolds’s fourth-wall breaking Deadpool, which has beaten Warner Bros. critically reviled DC Universe world-builder Batman v Superman: Dawn Of Justice at the North American box office… on one-fifth the production budget.

Speaking of DC and Batman v Superman, the superhero genre had all but stalled after the failure of 1997’s Batman And Robin. Blade was a step in the right direction in 1998 but it was really Bryan Singer’s adaptation of X-Men in 2000 that revived the genre. X2: X-Men United (2003) was even better, but the series stumbled with X-Men: The Last Stand (2006) and X-Men Origins: Wolverine (2009). The X-Men: First Class (2011) prequel, The Wolverine (2013), X-Men: Days Of Future Past (2014) and Deadpool were all massive improvements. But, it’s important to note how much has changed in the past 16 years. Namely, Marvel Studios has redefined the genre with the shared universe of characters under their control, in the form of the “Marvel Cinematic Universe” movies now under the Disney banner. They’ve since reclaimed the rights to Daredevil and Punisher (both starring in Netflix shows) and worked out deals with Universal and Sony for Hulk and Spider-Man, respectively. But Fox still controls the rights to Fantastic Four and X-Men-related characters exclusively.

This writer is hopeful that after Hugh Jackman’s final turn as Logan in the next Wolverine movie, Fox will work out a deal similar to the one that put Spidey in Civil War and next year’s Spider-Man: Homecoming. After all, the X-Men series is due for a reboot. We have multiple actors playing different characters—including Professor Xavier, Magneto, Cyclops, Jean Grey, Beast, Angel and Storm—in a complicated timeline made all the more confusing by Apocalypse, which features the comic book villain of the same name played by Oscar Isaac (Star Wars: The Force Awakens). It's a bit underwhelming as far as franchise victory laps should go, but despite its shortcomings, there is still plenty to like about this installment.

Evan Peters stole the show as Peter Maximoff in Days Of Future Past with an incredible slow-motion kitchen fight scene that showed us what it looks and feels like to move as quickly as Quicksilver. Much as Daredevil Season 2 upped the ante on that all-one-shot hallway fight scene from Season 1, Apocalypse takes that Quicksilver moment and amplifies it tenfold in arguably the movie’s best scene. What’s that you ask? Didn’t Quicksilver die in Avengers: Age Of Ultron? Well this is part of what makes all of the rights issues so confounding. Fox controls all of the characters in the X-Men universe and the term “mutant” itself. Quicksilver and Scarlet Witch are tricky because they are both X-Men characters and members of the Avengers in the comics (let’s not even talk about when they were in The Brotherhood Of Evil Mutants). They are both children of Magneto, a story point that had to be lost in The Avengers movies because Magneto doesn’t exist in the MCU. So this Quicksilver is distinct from the one in Age Of Ultron because he exists in an entirely different universe. Aaron Taylor-Johnson  played the Quicksilver of the MCU, an “enhanced individual” (like his sister) since mutants don’t exist in that world. Marvel Studios is certainly making better superheroes movies than the Marvel-branded films churned out by Fox (Fantastic Four, anyone?), but Fox has the advantage when it comes to Quicksilver. The Evan Peters Quicksilver is awesome.

This writer grew up reading X-Men comics and has a Dark Phoenix tattoo on one arm and a tattoo of Wolverine supporting characters on the other. First Class gave us X-Men in the 60s, the decade that started it all for the Children Of The Atom. Days Of Future Past gave us the 70s, the decade when writer Chris Claremont and artist John Byrne gave us so many mythology-defining story arcs and characterizations. Now we finally get to see the X-Men in the eighties, yet another heyday for their comic book counterparts. This comes complete with Eurhythmics “Sweet Dreams,” Metallica’s “The Four Horseman,” Ms. Pac-Man, a Star Wars related joke rivaling the one in Civil War and a certain mohawked version of a classic heroine…

With apologies to Halle Berry, X-Men: Apocalypse finally gets the weather-wielding mutant right! Berry’s sometimes there/sometimes not accent, bad wigs and stiff delivery are gone, replaced by newcomer Alexandra Shipp (Straight Outta Compton) as Ororo Munroe. We get what feels like the “real” Storm, with her white mohawk and eighties swagger.  We even get to see her leading a band of kids who steal for food on the streets of Cairo, in a nod to her classic comic book origins. This Storm spends most of the movie serving the film’s villain, but it’s a treat to see her portrayed so well on screen for the first time.

Ok, technically this makes two reasons, but the X-Men universe’s Malcolm X/Martin Luther King Jr. combo is what makes these movies tick. Their friendship and conflict are at the heart of the X-Men story, a story about disenfranchised, misunderstood misfits who are sworn to protect a world that hates and fears them. Michael Fassbender and James McAvoy own and inhabit these characters just as their predecessors, real-life BFFs Sir Ian McKellen and Sir Patrick Stewart, did before them. We even get to see Xavier in his 80s-tastic blue suit before Apocalypse is over. Wolverine became the “star” of the X-Men (just as Iron Man went from third-tier superhero to Avengers showboat) but in truth, the team’s leaders were always Cyclops, Storm and to some extent Jean Grey (whose Phoenix form gets explored a bit here, with possibilities left open for future installments).

Speaking of Wolverine… Yes, he’s in the movie. Yes, it’s an extended cameo (versus an “official credited appearance”), but without spoiling anything, we can tell you that it’s longer and better than his cameo in First Class. The next Wolverine film will mark the ninth (!) time Hugh Jackman has played the character onscreen; the splitting of Avengers: Infinity War in two and his confirmed appearance in next year’s Spider-Man: Homecoming will give Robert Downey Jr. (no relation) as Tony Stark the edge over Jackman by just one movie.