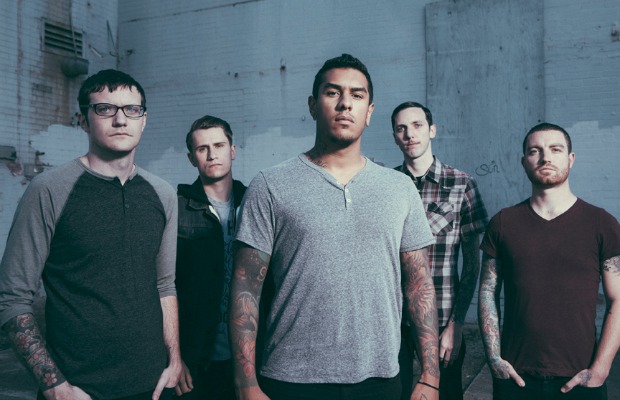 Mattie Montgomery knew this For Today album would be different from the others. At first, he set out to write the type of lyrics he had always written: words drawn from the theological and intellectual side of his Christian faith. But during the writing process for what would become the title track on the band's second album for Razor & Tie, Fight The Silence, Montgomery watched a video about human trafficking that brought him to tears and realigned the entire record.

The singer tossed out the lyrics he was working on and started over. It was time to use the band's platform like never before.

Now, For Today are raising awareness (and money) to fight human trafficking. Together with the A21 Campaign, the band are speaking to the audience they've built through nearly a decade of touring and transcendent performances that blend moshpit and pulpit with a tent revival-style fervor.

Of course, while For Today's new album may be called Fight The Silence, the band members themselves have been noticeably quiet for nearly a year.

In January of 2013, Mike Reynolds dragged For Today into the country's gay marriage debate with a series of tweets in which the then-guitarist admonished Christians to “separate” themselves from the “progressive liberal agenda” of the government and declared there to be “no such thing as a gay Christian.” As explosive reactions unfurled on social media from all sides, Reynolds left the band. (The For Today camp said this had already been in motion.) Montgomery invited anyone who felt hurt, confused or enraged by the Tweets to speak with him directly, giving out his phone number on YouTube.

He speaks openly about his newfound lyrical vulnerability, the relationship between poverty and crime, what fans can do to better the world, punk rock, why many modern bands refuse to take a stand on anything, the aftermath of Reynolds’ tweets, his views on the legalization of gay marriage–and the Backstreet Boys.

In a statement released with the new record, you talked about being moved to tears by a video about human trafficking. Fight The Silence is already raising awareness about the issue, and the album has only been out for a week. What can fans do once they've been informed and inspired?
MATTIE MONTGOMERY: That really was the question I was faced with. I became aware of human trafficking and the injustice of it, and then I thought, “Well, what can I do?” Maybe if I was part of some paramilitary group of mercenaries, maybe we could go bust into brothels and set people free. But I don't have the connections and resources necessary to do that. [Laughs.] What hit me and the reason I wrote “Fight The Silence” is I realized I may not have the guns, the expertise or the knowledge necessary to take that sort of action, but I can use what I do have. I have a platform. I have a voice.

That doesn't mean you need to become a senator. Use what you have, even if all you have is a Facebook page and a group of friends. You guys can get together, like For Today did, and raise money for the A21 Campaign, who do have the resources to take action. >>>