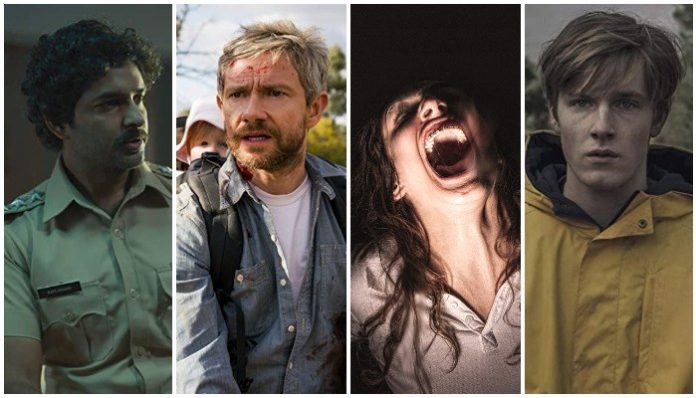 Fear knows no borders. That’s a great thing for horror fans, and thanks to Netflix, international fright films and shows are more accessible than ever. With a growing selection of movies from around the globe, it’s never been easier to experience the genre as interpreted by so many diverse cultures.

Nevertheless, wading through Netflix’s abundance of choice and clunky search interface can be daunting. To streamline the process, we’ve picked 10 of our favorite foreign titles to keep you up at night. Now, get your passports ready because we’re going on a world tour of terror.

Read more: Johnny Depp has been forced to exit the ‘Fantastic Beasts’ franchise

Our first stop finds us in the land down under for a wholly original and heartbreaking dive into the zombie subgenre. Cargo, from the filmmakers Ben Howling and Yolanda Ramke, stars Sherlock’s Martin Freeman as Andy Rose, a family man searching for sanctuary in a world ravaged by a zombie plague. With his infant daughter in tow, Andy finds that there are far more dangerous monsters in the Outback than flesh-eating ghouls. Like George A. Romero’s original Night Of The Living Dead, this film proves that the zombie apocalypse works best when seen through the eyes of ordinary people.

In a dystopian near future, a man named Goreng (Iván Massagué) volunteers for incarceration in a “vertical self-management center” as a prerequisite to obtaining a diploma, which will vastly improve his career potential and social standing. A prison of stark, numbered cells, the vertical self-management center is a multileveled tower built around an open rectangular shaft through which a platform laden with a sumptuous buffet of food is lowered daily. As the food dwindles floor by floor, the inmates on the lower levels resort to cannibalism for survival. An unusually thought-provoking horror film, The Platform has a scathingly critical worldview that provides no easy answers.

When Tun (Ananda Everingham), a photographer, and his girlfriend Jane (Natthaweeranuch Thongmee) flee the scene of an accident that’s left a young girl dead, mysterious anomalies begin to appear in Tun’s photographs. Jane gradually discovers a dark secret that will jeopardize her relationship with Tun. Although the beginning of the film is a bit by the numbers, its familiar plot takes a twisted turn in the last half hour. Filled with some truly disturbing sequences, be warned: Shutter takes the jump scare to new heights.

It’s the worst Christmas ever for a middle-class English family in Await Further Instructions. Nick Milgram (Sam Gittins) returns home for the holidays with his girlfriend Annji (Neerja Naik), where their progressive politics and Annji’s Indian heritage put the couple at odds with Nick’s xenophobic family. As tensions rise, an ominous message on the TV hints at a national catastrophe. The Milgrams soon find that their doors and windows are mysteriously blocked as the televised alerts become more frightening and contradictory. The family’s paranoia is whipped to a frenzy of violence and suspicion as the film barrels to an unexpected climax.

A time-travel thriller that merges horror with science fiction, Dark has unfairly been deemed a German version of Stranger Things. Tonally, they are worlds apart. Moody, grim and oozing with an atmosphere of dread, Dark revolves around a 33-year cycle of child disappearances occurring in 1953, 1986 and 2019. Over the course of its three seasons, Dark places viewers in a world devoid of hope, teetering on the edge of apocalypse where nothing is what it seems.

Not a great film by any means, KL Zombi is a broad, over-the-top zombie horror comedy in the tradition of Juan Of The Dead and Anna And The Apocalypse. Zizan Razak stars as Skinny, a field hockey-obsessed slacker who must fight his way across Kuala Lumpur to save his friends. Possibly the only zombie flick in cinema history with a happy ending, KL Zombi isn’t for everyone, but fans of Troma Studios-style gore and lowbrow laughs will find plenty to enjoy.

Read more: These are the 10 greatest final girls in horror movies

Sandra Escacena stars as the eponymous Verónica, a high school student who’s become the de facto caretaker of her younger sisters and brother in the absence of her overworked mother. An interest in the occult inspires Verónica to contact her dead father via a spirit board with disastrous results for her and her siblings. Although the film’s hype for being so scary, people can’t finish it is debatable, there’s hardly a false note in Verónica, thanks to its skilled cast and tight direction.

Three ghost-obsessed kids investigate a local legend revolving around the house of a horror author who died under mysterious circumstances in Typewriter. Reminiscent in style to Stranger Things and the classic HBO anthology Tales From The Crypt, Typewriter teeters between campy chills and sheer terror. Despite its generally light tone, it has enough genuine frights to keep even the most hardcore horror fan hooked.

Under The Shadow — Qatar/Jordan/United Kingdom

Set against the backdrop of the bloody 1980s conflict between Iran and Iraq, Under The Shadow is the story of Shideh (Narges Rashidi), a progressive Iranian woman whose values clash with the prevailing culture of her homeland. When her doctor husband is sent for compulsory military duty, she’s left alone with her young daughter, Dorsa. Living in an increasingly besieged Tehran, a mute child, a missing doll and an unexploded missile portend a devastating supernatural assault. A brilliant film by any measure, Under The Shadow would work nearly as well as a tense wartime family drama with the horror elements removed.