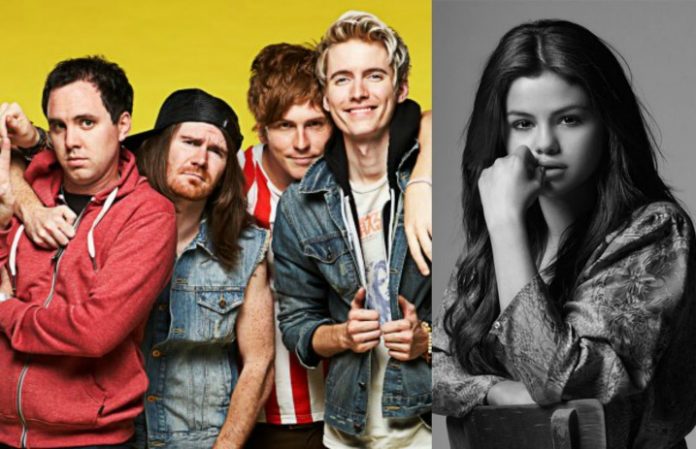 Life before Justin Bieber, Spring Breakers and “Hands To Myself,” consisted of Selena Gomez taking Photo Booth pictures on her MacBook and listening to Forever The Sickest Kids.

Back in 2009, Forever The Sickest Kids actually invited the Wizards Of Waverly Place star to be on a duet version of their single “Woah Oh (Me Vs. Everyone),” and she hopped on the opportunity to be on the track.

At the time of the “Woah Oh” recording session, the Disney Channel starlet had just started production on her debut album, Kiss & Tell, which was released September 29, 2009 through Hollywood Records as a pop-rock project called Selena Gomez & The Scene.

“I’m in the car right now on my way to the studio with Forever The Sickest Kids, one of my favorite bands. I get to learn and have different experiences every time we’re in the studio, which I think is really good for me, just as a beginning artist,” Selena gushes in a behind-the-scenes video. “It’s so funny, my record hasn’t even come out yet and I’m gonna do a single that’s gonna come out before my record with them.”

While Selena Gomez was a self-proclaimed FTSK fangirl, often tweeting about the band and wearing their merch, the collaboration was actually very organic and not really all that random.

two things: 1. FOREVER THE SICKEST KIDS ARE AMAZING and 2. i am NOT dating Jonathan Cook!

Yay -I'm finally able to annoy her again. Missed this.

Gomez and Cook’s families grew up close to each other in Grand Prairie, Texas, and remain tight to this day.

Selena Gomez has since made a name for herself in pop music, releasing mega-hits like “Come & Get It” and “Same Old Love,” but we’ll never forget where she got her start… lending vocals to a version of “Woah Oh” and rocking out to “She’s A Lady” with our faves in Forever The Sickest Kids.

Forever The Sickest Kids are reuniting to perform for the first time since 2013 at the So What?! Music Festival in Grand Prairie, Texas, on Saturday, March 25, 2017. Maybe Gomez will take a trip back to her hometown for a special performance?