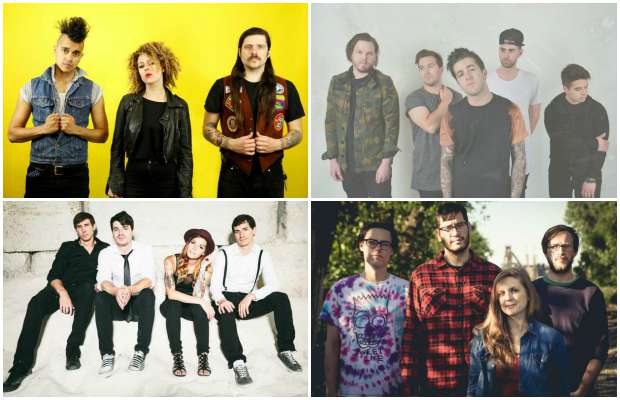 Welcome to the third installment of our new AP&R online series. Some of you may be thinking, “Wait. Isn’t this usually in the magazine?” Yes, it is, but we’re upping the ante with this section in our new issues by giving your favorite among our scouted unsigned artists an opportunity for a larger print feature in AP!

Formed in 2013, pop-rock group Yesteryear began by chance. “I happened to move in next to a house of three boys that solely played instruments,” explains vocalist Kelsey Wells. “I was friends with them before I convinced them to start writing music with me. Eventually it all just fell into place!” Earning an early audience through relentless promotion to crowds at local shows, Yesteryear soon found themselves sharing the stage with the likes of Paradise Fears, William Beckett, Set It Off and Against The Current following the release of their debut EP, We All Need Something. Combining pop punk sensibilities, singalong-ready hooks and a “fierce,” emotional approach to performing, the group are aiming to release a new EP by the end of the year.

“This band came together to write weird, heavy music that we wanted to play very loudly and to push ourselves creatively,” asserts Pete Milkovic, bassist of self-described “Weirdo Hardcore” outfit ORCA. Rounded out by vocalist Ian Herrington, guitarist/vocalist Molly Lape, and drummer Joe Willis, the Cleveland collective formed at the end of 2013, but immediately were forced to take a six month hiatus, following the exit of their original drummer. Once they secured a replacement in Willis and resumed writing, it’s been all systems go. Over the past year, ORCA have played as many shows as possible, forging the unique, spazzy, hardcore, experimental and sludgy sound present on their just-released debut EP, Alarum which intertwines Herrington’s guttural screams with Lape’s eerie singing. Expect a full-length followup in the near future, after the band make appearances at punk and DIY festivals throughout the summer.

To say things have happened quickly for London trio the Kenneths would be an understatement. Eight months ago, they weren’t even a band. Now, they’ve played Warped Tour, enjoying worldwide buzz and celebrating the release of their second EP, E. Formed after frontman Joshua Weller cold-called drummer Aicha Djidjelli on the recommendation of a friend, then recruited bassist Lewis Maynard over drinks at a pub, the group started strong and haven’t had time to look back. “Our first gig was in a warehouse in East London on Halloween. The room fit 30 people and 200 showed up. The next week we got an email from Kevin Lyman asking us to do Warped Tour,” asserts Weller. Combining classic punk sensibilities with pop hooks, the Kenneths move fast in every regard: According to Weller, each of their EPs took only about four days to record, the first after just four rehearsals. At the rate they’re moving, the Kenneths might be a household name in no time.

Sleeptalk formed from the fallout of another project, LIKE GIANTS, initially an outlet for experimentation in finding a new sound. Name-checking Blink-182 as a collective favorite, the band actually bear much more in common with Tom Delonge offshoot Angels & Airwaves, combining layered production, ethereal tones, and electronic influences. Where as to how they would describe their sound, vocalist Anthony Fitzpatrick offers “Space,” “We are actually calling this whole thing “electronic space rock.” Boasting a local following after just a handful of shows, the band recently released their debut EP PURE and have an ambitious concept planned for subsequent records. “We already have two more EPs pretty much finished,” explains Fitzpatrick. “They are all connected, just broken down into three parts.” ALT