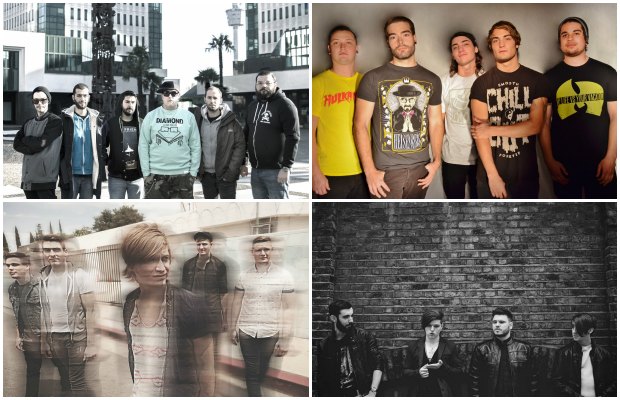 Welcome to the second installment of our new AP&R online series. Some of you may be thinking, “Wait. Isn’t this usually in the magazine?” Yes, it is, but we’re upping the ante with this section in our new issues by giving your favorite among our scouted unsigned artists an opportunity for a larger print feature in AP!

NOW PLAYING: Turn On The Light EP
Rocks like: New Found Glory, Set Your Goals, the Story So Far

Recently gaining notoriety for their cover (and accompanying parody video) of Bring Me The Horizon’s “Drown,” Italy’s 4th ’N Goal have spent the past few years cultivating their easycore-influenced sound, with hopes of breaking through to a global audience. Formed in 2009, the group’s current lineup was solidified in 2012, and they’ve worked their way up playing shows around their native Milan. “We started as nobodies, hopes upright and head down low. From the smallest bars to big support shows, we tried to work hard on ourselves as musicians, on keeping the show tight and fast,” says bassist Mike Fenu.

A conglomerate of lifelong friends, classmates, and chance acquaintances (vocalist Kyle Hollis met drummer Cole Clark through an online video game), relative newcomers Picturesque released their debut EP late last year, and managed to sell out their first hometown show in Lexington, Kentucky based on online buzz and word of mouth alone. Channeling a dark, ambient and aggressive sound anchored by Hollis’s powerhouse vocals, the group are already hard at work on their full-length debut, and will spend the rest of the year getting their music to as many people as possible. Just how do they plan to do that? The way many entrepreneurial up-and-comers have tried over the years: According to Hollis, Picturesque are “following Warped, handing out free EPs this summer. So, we'll be traveling and getting our music out. DIY grind 2015!”

NOW PLAYING: Do What’s Best For You EP
ROCKS LIKE: Mayday Parade, Boys Like Girls, All Time Low

Made up of twins Craig (vocals) and Ryan (drums) Sulken, along with their brother Brad (bass), and rounded out by guitarists Drew Thomason and Drew Richter, Cincinnati’s BoyMeetsWorld have perfected their blend of pop rock and pop punk, quickly finding an audience in a few short years, with one EP (and a Christmas album) under their belt. The band have benefited from a longstanding relationship with the Vans Warped Tour, scoring a spot at their hometown date in 2013 shortly after their formation, and returning this year as the official BBQ band. “I can go on and on about that opportunity alone, and what that entailed,” says Craig, “but the point is that we worked so hard every day, and I think made a really good impression on production, and most importantly Kevin Lyman.” He’s not exaggerating about that good impression; BoyMeetsWorld will be playing BBQ band for Warped the entire 2015 tour, and are set to release their debut full-length in June.

Alt-rockers Radio Room began making music together in high school as an excuse to hang out. “Once we left school, it started getting a lot more serious,” says frontman Robbie Murphy. After hundreds of small shows at any space that would host them and relentless networking (“We'd promote our band through word of mouth at our grandmother's funeral if we could”), the young, eclectic group—who incorporate indie rock, punk, and pop elements into their jangly sound—began to develop a devoted fanbase, leading to spots supporting acts like La Dispute and Kids In Glass Houses. For their debut album, 92 || 93, Radio Room made the trek stateside to record at Electrical Audio Studio in Chicago with legendary producer Steve Albini. Now they’re gearing up for a busy year of performances in support of the release. ALT