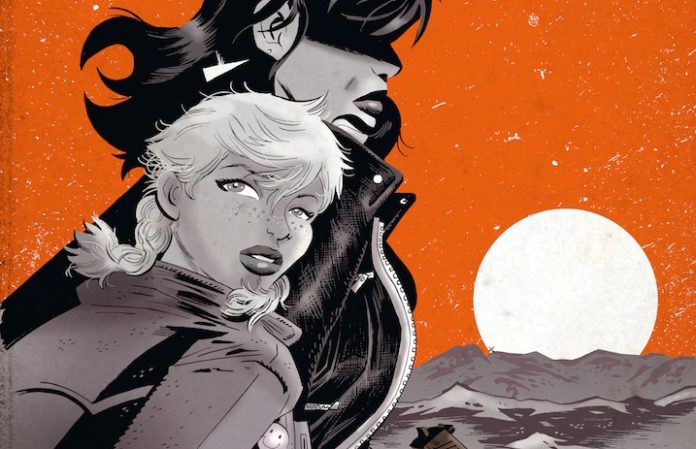 Frank Barbiere is a comic writer from New Jersey influenced by punk rock. When you open his newest Image Comics series, Violent Love, the first thing you’ll see are these lyrics from Beach Slang’s song, “Noisy Heaven,” to set the tone for the series—a throwback crime story about love and loss.

“Our heads are blurry/Our hearts are sharp things/I bet on you to make me nervous, to stay dangerous/Good love is not safe”

To celebrate Violent Love’s 10th issue and its upcoming second collected trade paperback, Barbiere talked to AP about how music not only acts as a soundtrack to his work, but a jumpstart to his career.

“I grew up in the North Jersey scene in my teens and was fortunate enough to see bands every weekend at small shows,” Barbiere says. “The scene was really inviting and community-driven, and from high school on I was in bands and most of my friends were either in bands or just going to shows all the time.”

Eventually Barbiere attended college at Rutgers University in New Brunswick, where he was welcomed into their music scene, known for their legendary house shows with bands such as the Bouncing Souls frequenting basements around town.

“My twin brother was in Let Me Run, so I would hang out with them a lot and tour with them when I had time as just another person in the van along for the ride,” Barbiere says. “Being in bands taught me a lot about DIY and just getting out there before asking for permission. Learning to just take full ownership of my creative pursuits from writing songs, booking venues, to making all of our art, flyers and websites just really instilled a focused creative energy in me. I was fortunate to be surrounded by like-minded creatives, and it really was so valuable to me in my formative years to feel like I didn’t need a label or tons of money to make the things I wanted to make.”

After he was done playing in bands, Barbiere began to feel a creative void—that was until Wizard magazine released an article about Image Comics being driven by creator submissions, rather than having a set staff of writers.

“Reading that article inspired me to start taking out a bunch of extra money in my college loans and using it to pay artists to make my own books,” he says. “Maybe not the best plan in hindsight, but it got me making comics, and I loved the immediate ability to create and self-publish. I was fortunate enough years later to actually get my first book published at Image, and that got me started in an actual ‘career’ as a writer.”

Similar to the music scene, comics has a strong community of its own with plenty of like-minded people. The New Brunswick music scene introduced Barbiere to his now friend, Matthew Rosenberg, who expressed an interest in writing his own comics.

Read more: Comic writer Matthew Rosenberg on the importance of music in comics

“We struck up an immediate friendship through our shared interests and started going to comic cons and renting tables. We both grew up touring, so we loved the idea of driving to different cities and crashing at people’s houses while doing cons. By hanging at shows, we met a bunch of other artists and writers who were trying to break in and just built a lot of friendships over the shared experience,” Barbiere says. “Steve Orlando [DC Comics writer] and I struck up a friendship after we both started at Image, and he remains one of my very close friends. It really was that same vibe of just getting out there and making your own stuff, much like music, and establishing yourself in a scene.”

Barbiere finished working with artist Victor Santos on a project called Black Market for BOOM! Studios, and the duo knew they wanted to create their own book together. Out of left field, Santos pitched a romance book.

“I didn’t really know how to approach it, and Beach Slang had just released The Things We Do To Find People Who Feel Like Us, which was heavy in my rotation,” Barbiere says. “I love James Alex’s lyrics and was just focusing on how that record channeled so much of what I wanted to put into my comics work and was hit by a jolt of creative energy when I heard the line, ‘good love is not safe’ from the track ‘Noisy Heaven.’ It was the perfect mantra for what I was trying to encapsulate in this new story, and I actually wrote the line on a Post-It note [on] my desk.”

The first volume of Violent Love is called Stay Dangerous after a lyric from the same song. The lyrics and vibe of the music synced up with Santos’ artwork, and they knew they had a hit. Aside from the music of Beach Slang, there are plenty of bands who inspire Barbiere and shape the way he writes.

“Beyond the obvious of just parsing lyrics and individual tracks—Jawbreaker is my favorite band of all time, with a close second of the Weakerthans—music just creates a unique tone and atmosphere for me. I love to listen to a whole record curled up with headphones and my eyes closed to really get a feel and almost a picture in my head from a record. I know I sound pretty lame right now,” Barbiere jokes, “but it’s that tone and feeling that I often strive to recreate in my work. I’m so fortunate to have found so many talented collaborators who are able to really create the same kind of tones and energy in their art.”

Violent Love focuses on Daisy Jane, one of Barbiere’s favorite characters he’s written. The aim was to avoid clichés that come with female protagonists in action and crime genres.

“Daisy embodies a lot of the energy and tone of the Beach Slang songs that lead to her creation: She’s dangerous and wild, but really does have a solid, tragic center to her. The series sees her grow and learn what she’s really about in a pseudo coming-of-age story, but one where she’s thrust into a world of crime. It was important for me to give Daisy a lot of dimensionality and to show a lot of her flaws, as well as not be afraid to put her in dangerous situations.”

Although Barbiere would love to revisit the series in the future, Daisy’s story comes to a close in issue No. 10 released by Image Comics, a publisher close to his heart.

“There is a purity to it that reminds me of writing music in my bedroom and just worrying about the actual product instead of pleasing a label, company, editor or whatever,” he says. “It’s truly rewarding to have such an outlet for such authentic work, and I’m [honored] to be part of their amazing history and library.”