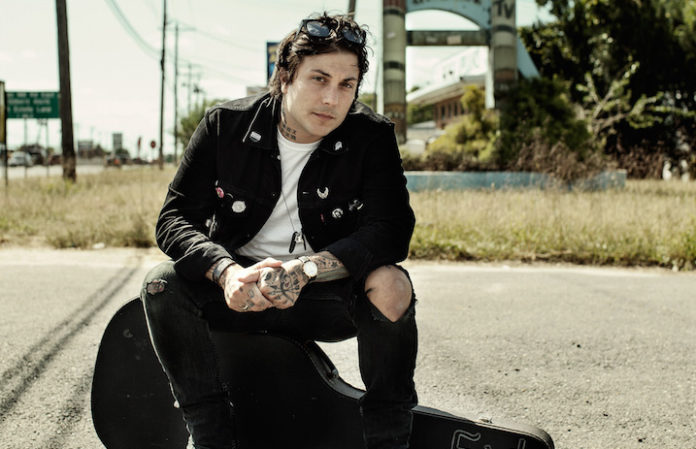 Before the inception of Frank Iero And The Patience (née Frnkiero Andthe Cellabration); before, even, the end of My Chemical Romance, Frank Iero uploaded a one-minute-20-second noisy punk song called “Xmas Sux” to SoundCloud in mid-December 2012. The song ripped so hard that it was a damn shame it was made in jest. (Key lines include: “I don't give a fuck about Santa/I don't give a shit about cheer.”)

“I did this thing as kind of a joke, and all of the sudden, I was like, 'Dammit! I really like that song. I want to do something with it for real,'” says Iero.

Thus was born “No Fun Club,” a more serious observance of anti-cheer that's getting its due nearly five years after its original incarnation.

Listen to it now:

Read more: 11 times bands invited kids on stage, and it was the cutest

Here, Iero discusses the song, his new EP Keep The Coffins Coming and exactly what it takes to be accepted into the club.

So, what the fuck is with the band name? Is it going to change again?

[Laughs.] Yes. The band name will change every time. Every time the band changes. I think that’s awesome. Why stop now? To me, it’s not confusing. I guess other people find it to be confusing, but to them, I say, “Don’t be silly.” It will always have my name in front if it is a solo project. It’s a way to keep me interested, because I have such a short attention span on things. I enjoy that honeymoon period where you start something new and you name it and cultivate itd and figure out what it’s going to sound like. I really enjoy that. That old “What’s in a name?” idiom—– Fuck that, man! Everything. Everything’s in a name. I enjoy it way too much to stop now. As far as this EP, to save on any kind of confusion with the digital age, it is rendered the Patience, but if you pay attention to the artwork, it has the name “Patients.” I was like, “That’s clever as fuck.” [Laughs.]

“No Fun Club,” the concept, is something that has predated the song a fair bit. Can you tell me the origin story?

I guess I started to think about how I felt about everything. [Laughs.] I think I was born in the No Fun Club. I put a name on it maybe two years ago. I think it started on the road, definitely, probably driving in a sprinter van somewhere and realizing that not only was I unhappy, but that everyone around me was too, so we could kind of find solace in each others’ misery. [Laughs.] Really, what it is is about just not having the energy to fucking impress anybody or even the want or need to be a part of that game, and realizing you don’t have anything to fucking prove, basically, and you’re not going to go out and fuckin’ pretend to be something you’re not and put on a fake smile that makes you even more sick to your stomach.

Is that the requirement to be in the club? If you had to put a list of requirements on the clubhouse, what would they be?

Oh, geez. Requirements for No Fun Club: “Don’t be a faker” is the first. No faking and no rules.

You got to record with Steve Albini for the new EP, which I know you were really stoked on.

Oh, hell yeah! When I got the call that he was free and wanted to work with us, I was like, [Raises voice a few octaves] “Fuuuuck!” It was a dream come true. I’ve been thinking about that working history for as long as I can remember. I think the first thing was picking up a guitar, then writing a song, then, “I gotta record with Steve Albini.” It was in that succession. It’s been a long time in the making.

Do you have any studio experiences that made it particularly special for you?

Here’s the thing: You’re immersed in it. You stay in the studio; and I think, for me, the best thing about it was that it was really a confidence-builder, because he wasn’t like this quintessential producer. He’ll even tell you, “I’m not a producer.” He didn’t come in like, “Fuckin’ change this! Play through this amp!” or anything like that. He was like, “This is your stuff. The reason you’re here and the reason you’re doing what you’re doing is that you know what you’re doing. And it’s really good. So, why would I come in and change anything? I want to listen to you and make the record that you want to make. I want to record the songs that you wrote the way you wrote them and the way you want to hear them back. That’s what I want to do for you.” It was such an amazing experience to go in there and to be in charge. He’s such a fantastic facilitator, just a genius when it comes to things. You mention a sound or a vibe, and he immediately gets to working and just knows what to do to give you that. That’s imperative in the studio: Not having to wait around for somebody to fumble through things. When you have somebody who is a master of their craft, I feel like that shows in their recordings.

Regarding your work as a lyricist: In a time when it’s less likely someone will pick up a CD and read lyrics in its booklet, you make sure to showcase your lyrics. You have a whole section for it on your website, and you tweeted out the words to “No Fun Club” a while ago. Why is it important for you to showcase your words in such a way?

When I was young and coming up listening to bands, I didn’t put as much emphasis on the lyrics of songs. I always felt like, “Well, if it’s a great song, it doesn’t matter what’s being said.” I think that just comes from an adolescent mentality, not really caring that much, just kind of throwing it together. I look to some of my favorite bands that would be like, “Ah, it doesn’t matter. It’s a joke I just kind of threw together. The music is the most important thing.” And I do agree that music is at the forefront, but at the same time, I don’t think I can ever love a song that I don’t connect to lyrically. Now, as an adult, writing, it’s very important to me that my sentiment is coming across the way I need it to come across and that the things I’m saying are clear and concise. I’m saying what I mean and I mean what I say. Throughout my career, I’ve been really fortunate to work with some really accomplished musicians and accomplished writers and people who really want to hone their craft and say important things, whether through guitars or other instruments or through their vocals and their lyrics. I’ve always found that to be so admirable. When it came time for me to take the mic, I wanted it to feel the same way. I wanted to feel like I was really speaking in a way that would affect people, as opposed to just being frivolous and not really caring.

Speaking of words: your EP Keep The Coffins Coming shares the title of the Julius Long book. Was it inspired by it?

I feel like a lot of times art imitates life, and at the same time, you draw inspiration from things that kind of just pass by you. It’s like driving down a highway and you see something out of the corner of your eye, and you’re like, “Whoa! What was that?” And you file it away. I think that happens a lot in Julius Long’s book. I came across the book… I loved the title, and although the EP doesn’t have anything to do with the pages in between that book, even though things are happening in the world right now are so intertwined with the things that go on in that books, the title for me meant something else. I wrote that down years ago, and threw it away for future reference.

When I started to think about the songs that were on the EP and where the EP came from, about how these compositions are a lot like these soldiers you kind of send out and kill off. You have to kind of bury them in order to relinquish control and release them into the world. The last step of any art project is the release, you know? I didn’t think that earlier on. I just thought that when you’re done with something, that’s the end of it. But it’s so much more than that. It’s relinquishing control and giving it to the masses and seeing what comes back in forms of inspiration and, hopefully, continued creativity. So, I thought about that, right? And I thought about these songs as these memories—these dead and gone creations, right? And I thought, “I love that title so much, maybe I should do a play on that?” Really, what I was saying was how you relinquish control of something, you let it out, and how hopefully something comes back. And I thought, “Well, maybe I shouldn’t fuck with the title at all. I should just keep it as-is, because I was inspired by it.” That’s how it came about. It’s this cycle of killing off your ideas, giving them away, and having them come back in this crazy cycle.

It’s sort of like—to get mystical with it—in the cycle of magic, you’re supposed to destroy the intent; and if something is going to come of it, it will come after that.

See? Man. It takes a witch to know a witch.

Frank Iero's Keep The Coffins Coming EP will be released Sept. 22 on all digital retailers; you can pre-order it right here.