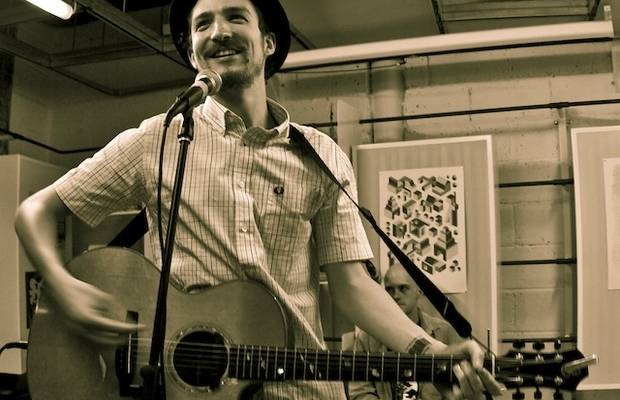 2012 has been a very good year for English punk-folk singer Frank Turner. Still riding high on the success of his 2011 release, England Keep My Bones, Turner has played 116 shows to date, not counting his gig tonight in Baltimore or the four shows he played with his hardcore side project Mongol Horde (more on that later). Along the way, he performed at the Opening Ceremony of the Summer Olympics, sold out Wembley Arena and visited Conan  to play his hit, “I Still Believe.” AP caught up with Turner during his stop in Phoenix to talk about his upcoming album, recording in California and the toils of performing in a hardcore band.

Once the tour’s over, you’re heading to California to record the next album, right?
Yeah, we’re heading to Burbank, California. We’re recording with a guy called Rich Costey who is an amazing producer who I’ve dreamed of working with for many years, but have only recently had the time and the resources to work with. We did a week’s pre-production before the tour. He’s amazing; me and my band all love him.

The main problem that we’ve had—and it’s a good problem to have—is I’ve got way too many songs on the table. At one point there were 25. As much as it can be tempting to think of doing a double album, that’s generally not a good idea historically. The main thing right now is whittling down the song list, but even so it’s a good problem because it means that the finished record will be all killer no filler.

Have you noticed a theme developing among the songs you’ve written so far?
I try not to think too much about that kind of thing. To me, creation and analysis should be two [separate] parts of it. When I’m actually writing and recording and making the record, it’s important to me to just shut my eyes and let it happen and not get too analytical about it.

Having said all that, there’s obviously a few things I can tell you. It’s kind of turned into a breakup record for me, which means they’re maybe not the cheeriest songs I’ve written, but hopefully there’s some optimism in there somewhere.

What’s different about these new songs? What can fans expect?
I think I’m getting better at songwriting with time. I think these songs are better than the ones I’ve done before. I’m really happy and proud of how they sound, lyrically in particular. I really feel like I’ve been pushing myself lately to be more in-depth with what I do and what I say and with the poetry of the whole thing.

Musically it’s not unlike what I usually do. It’s a mixture of stuff that’s just me on my own with my acoustic guitar and stuff that’s done with the whole band. There’s some really quite heavy stuff on there and there’s some light acoustic stuff as well. Hopefully it’s a well-rounded piece of work.

Switching gears, I want to talk about Mongol Horde. Why did you decide to start a hardcore side project?
It’s something that I’ve wanted to do for a long time. I grew up with that kind of music and I played in heavy bands for a long time—much longer than I’ve played the music I play now. Also the drummer I’m playing with in Mongol Horde is a guy called Ben Dawson who I grew up with. He and I played in bands together from age 10 to 23. It’s never something we really discussed; we just knew we’d play together again. And then I finally found some gaps in my schedule to put things together and make time to write some songs, make some demos and do some shows, which was really good fun. It was kind of like scratching an itch, doing music that heavy again. It was quite creatively refreshing for me to do.

It’s definitely a side project for me, as in when we’ll be doing an album and a tour—which are both things I want to do—I’m just not really sure when we’re going to do those because it has to be on down time during my days off.

What was it like playing live with Mongol Horde at the Leeds and Reading festivals?
The shows were really hectic. We played for 28 minutes, I think our set was. [Laughs]. I discovered that I’m no longer 23 because at the end of the set I literally felt like I was having some sort of gigantic pulmonary collapse. It was really fun, and there’s something kind of primal-screamy about playing that kind of music and performing in that way. You come off stage and you’re utterly, completely 100 percent drained of all energy and emotion and sweat. It feels good.