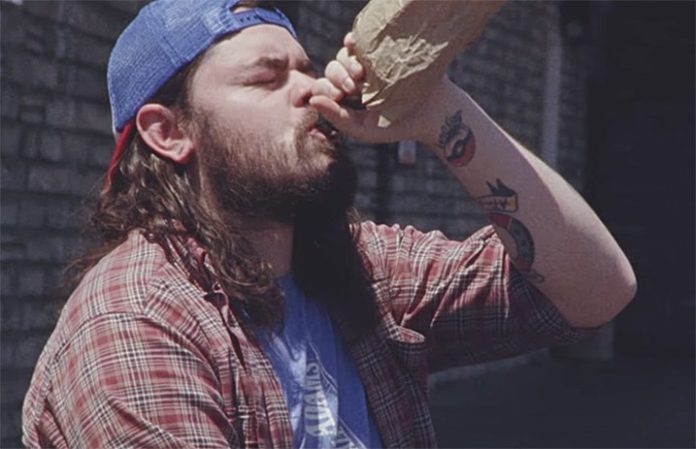 One of our favorite up-and-coming acts Free Throw are premiering their new music video for “Randy, I Am The Liquor,” taken off the band's latest album, Bear Your Mind.

The emo-punk act's video is a flashback-style narrative, with the concept being based off a Dazed And Confused-styled scenario—and it also happens to feature a person in a liver suit.

“Originally, we had an idea to do a kind of Dazed And Confused-style video. Turns out, it's pretty hard to try and film a video that takes place in the '70s when it's 2017 and people are driving their newer cars through the shot,” vocalist/guitarist Cory Castro explains. “So the director, John Komar, suggested to go with a subtle feel and the flashback narrative. The video was shot entirely on 16mm film to give it that classic look.”

The Triple Crown band will be hitting the road alongside Trophy Eyes, Grayscale and Head North this fall. Tickets are available here.

Watch the music video for “Randy, I Am The Liquor,” along with a Q&A with Castro, below:

When we talked for AP Recommends in issue #351, you explained that “Randy, I Am The Liquor” is the track that best sums up the band. What does this song mean to you guys?
CASTRO: It's loud, fun, and references drinking, all things that seem to sum us up as a group of friends. But at the same time, it's a song with a very real message. We think that's what Free Throw is all about.

Any memorable moments from the music video shoot?
Probably getting a bottle broken over my head multiple times, or anything to do with the ridiculous liver suit. When we were shooting the live scene, people were shot gunning beers and beer was flying everywhere. The whole shoot was a lot of fun, and the whole team behind it was great to work with. John Komar and crew did a great job.

How has touring on Bear Your Mind been so far, and how stoked are you guys to be hitting the road again later this year?
It's been absolutely amazing. The response to the record has been great, and it's so much fun playing the songs live, hearing people sing along and have fun. As for hitting the road, we are extremely excited. We are getting to do what we love, and we can't wait to see all of our friends across the country (and make new friends as well)!