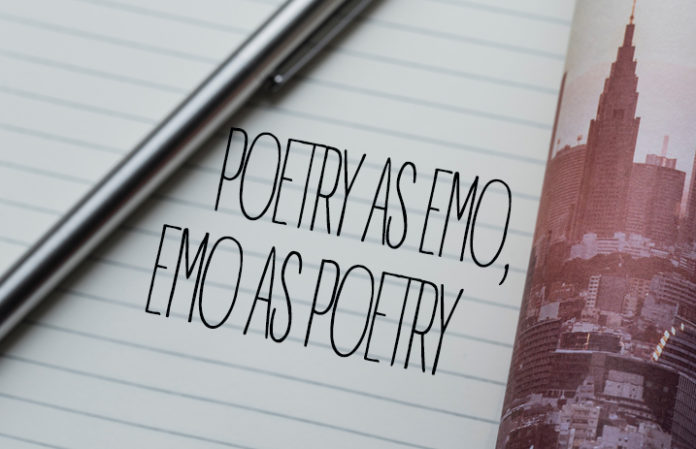 The quote about poetry that stands out more than any other is by the poet Rita Dove: “Poetry is language at its most distilled, its most powerful.” This, in some ways, is true. What poetry provides, and has provided for centuries, is an introduction to language at its most urgent. In the history of love poetry, all of the best poems are direct, trying to hone in on and then dissect a specific emotion. Often love, but also a love that stands in the face of survival. “You shall be together when the white wings of death scatter your days,” Khalil Gibran writes in the poem “Love One Another.” At the heart of our most classic love poems is this simple and echoing sentiment: Our love will survive whatever comes.

For all of the hand-wringing about golden-era emo’s overwrought sensibilities, it bears to mention the access points that poetry can offer. Not everyone can write a good poem, but everyone can tap into what the ethos of poetry expects out of them and spill some level of raw emotion out onto the page. Emo isn’t particularly a genre of story as much as it is a genre of feeling. Some songs, and even albums, rely on a narrative thread. But the reason so many of the genre’s concept album ideas fell to pieces in the mid-2000s was that it’s difficult to lean into both emotional urgency and nuanced, well-paced storytelling. The bands that did it best—My Chemical Romance, for example—either picked stories with a built-in emotional risk or sacrificed some of the richer emotional tenor for the sake of telling a story. In other genres (particularly a genre like rap, which relies on the spoken word at the root), it’s easier to access the more raw form of storytelling: base, open-ended, emotionally calm.

“Irony as both a tool of healing and a defense mechanism is emo’s greatest and most frequent calling card.”

This isn’t to say that emo and pop punk don’t have their storytellers. Dan Campbell from the Wonder Years is in the lineage of great American narrative poets like Allen Ginsberg, which might explain the Ginsberg poem “America” playing in the background during the intro of the Wonder Years album Suburbia, I’ve Given You All And Now I’m Nothing. Campbell is a precise writer, a little less abstract than Ginsberg, but just as good at splashing locations and times into the histories he’s singing about. Campbell is the type of poet who is a world-builder, as opposed to a strict feeling-builder, though there are feelings to be had in his writing, particularly on the last Wonder Years album. They both opt for blunt honesty in the place of theatrics. In “America,” Ginsberg writes, “I say nothing about my prisons nor the millions of underprivileged who live in/my flowerpots under the light of five hundred suns.” In the song “Came Out Swinging,” Campbell writes, “I came out swinging from a South Philly basement/caked in stale beer and sweat under half-lit fluorescents.” Both men are conveying the claustrophobia of their once-captivities, imagined or otherwise.

There are lines to be drawn like this throughout the middle of the 2000s, when emo and pop-punk bands were popping up everywhere. Pete Wentz is the great ironic poet, like Philip Levine, who is also from the Midwest, and who wrote in “The Negatives,” “All men/turn from us, knowing our pain/is not theirs or caused by them,” which directly faces Fall Out Boy’s first era of work. Irony as both a tool of healing and a defense mechanism is emo’s greatest and most frequent calling card. Kids who are hurt but not willing to show they are hurt, doing the performance of asking “How did I get here, anyway?” despite knowing the answer that hangs above the question.

“The poet who chooses to rely on irony as a mask is briefly brilliant and always quotable. But underneath, there is often an unraveling that is less glorious.”

There is something about this that catches on. It can be seen in the work of writers like Tom DeLonge, and of course, Jesse Lacey. The great failure of the ironic poet is that which they are working so hard to cover up will eventually resurface, leading to the great and tragic breakdown. In the cases of DeLonge and Wentz, this happened more visibly and obviously: Wentz’s musical uncertainty after Fall Out Boy’s 2009 breakup and DeLonge’s current extra-musical focus. For Lacey, it is more subtle. It is in the way that, when he chooses to abandon irony, there is only anger left. The poet who chooses to rely on irony as a mask is briefly brilliant and always quotable. But underneath, there is often an unraveling that is less glorious.

“The best love poem does not name the desire it is reaching for, so that it makes the longing universal.”

This leaves us back where we began: with romantics. For a genre fixated on the interior of love, so many of its songs are about leaving, loss or looking backwards. This makes traditional sense, even in the historical lens of poetry. The love poem is rewarded, but it’s not as difficult to process as pain. The emo love song is at its best when it is asking—or softly begging—for affection from an unnamed would-be love. A song like “Valentine” from the Get Up Kids falls squarely inside the traditional love poem canon. The best love poem does not name the desire it is reaching for, so that it makes the longing universal. Even when it is more jarringly sexual, like Taking Back Sunday’s “Great Romances of the 20th Century,” it becomes a greater touching point for everyone in the world who might be longing for a thing they can’t name.

“Pace, meter and, yes, a resonating emotional vulnerability are all hallmarks of the American poetry canon. Now, they are also hallmarks of a genre that gave us lyrics to put on our walls, our bodies, our hearts and in our mouths, forever.”

All of us, at some point, suffered through some poetry unit in some class. Teachers teach the classics, but rarely from an angle that speaks to poetry’s practical uses and how it transfers through genre. I am of emo’s generation. Most of these writers and artists grew up in the same time, though with different emotional stakes. In many of them, I hear the poetry that I learned and then quickly dismissed through years of high school and college. Now, as someone who writes poetry for (some of) a living, I understand what these songs, even unintentionally, have been reaching for the whole time. Pace, meter and, yes, a resonating emotional vulnerability are all hallmarks of the American poetry canon. Now, they are also hallmarks of a genre that gave us lyrics to put on our walls, our bodies, our hearts and in our mouths, forever.