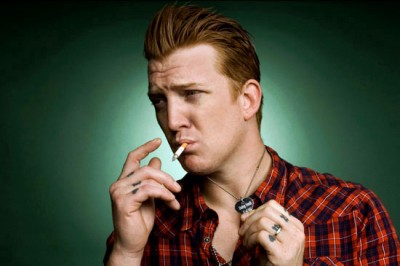 We here at AP love to talk. So much so, that when we do interviews with the rich and famous (or the on-tour and barely-scraping-by-eating-Taco-Bell), we end up with an excess of Q&As that can't be wedged into the magazine, no matter which way we turn it. This is why we have From The Editor's Floor. This week, enjoy associate editor Tim Karan's full interview with Queens Of The Stone Age frontman Josh Homme.

TIM KARAN: Where have you been, Josh? You’ve proven very elusive.
Dude, you know what it is, man? It’s these fuckin’ oils. Essential Oils. Every morning, if you get up and put ’em on, sure enough, if someone tries to give you a hug…poof! Like a fish.

Wow.
Yeah. So Just go easy on the Essential Oils. Learn from my mistakes.

I might even be able to tell the world…
Yes. This is a PSA.

So, yeah, we’re running a review of the new record…
Why are you giving it a half a star?

I’m not giving it a half a star.
You know it should be a “no” star. You continuously push, push, push, Tim. You’ll be fired by your editor and I don’t want that to come into your life.

Maybe I’ll give it another listen…
Yeah, knock it down a peg.

So first off, how tired are you of answering questions about Latin?
You know, it just started, and I gotta admit. I forget how often people don’t get things. [Laughs. ] They’re like, “I don’t have time to get it. Can you just give it instead? And maybe I can get it that way-like physically? But I honestly think that makes the title even more valid because it’s a modern day title. I know it’s in one of the world’s oldest languages. [Laughs. ] But that’s the only aspect of it that’s old school.

As far as dead languages go, there’s really nowhere to go but down from there…
Yeah, I could do a Sanskrit thing or Aramaic. But you know what? People aren’t gonna get that.

Especially since it’s translated in everything you’ll read about the album, including this.
Yeah, I was gonna let people figure it out and then I was like, “Nope.” [Laughs. ] But really, the title is great for me because it’s already striking so much conversation, which I guess makes it a great title. Any kind of art that you fancy you’re making should elicit some type of reaction.

And just to be sure, it means “the common era?”
Yeah. I like the layers of that. It sounds like “the Vulgar Era,” which I like. It’s pseudo-intellectual because it’s Latin. The Common Era doesn’t mean “commoners.” It means like the era we have in common. So there’s another layer there. It means it’s a very present-day record. It’s a very modern record. This is what we sound like modern. And it ended up loosely putting a rope around the record and pulling it all together because this record is about the generation we live in.

Do you think recording deep in the heart of Hollywood provided any direction?
I would’ve been totally screwed without it. I honestly didn’t have something to tell somebody else until I made those drives every day. Like people think that a song like “I’m Designer” is finger pointing, but it’s not. It’s camp. It’s about indecision.

Everything about Lullabies To Paralyze seemed dark-from the tone to the band turmoil to the cover art. Obviously Era Vulgaris is still dark, but did any more light make it through?
Yeah, I think this record is sick in a “let’s go out in the nighttime sick.” And I think the last record is “I’m actually sick. Sick in the head.” But it made this record possible. I think the expectation was that we’d make Songs For The Deaf II with Lullabies and we didn’t on purpose. And that really cut us free to do whatever we wanted now. I’m really proud of this record. It’s like, I love this album and there’s nothing you can do about it. [Laughs. ]

Fully understandable. So this time around, maybe it’s just me, but in the past the band always seemed more like an ensemble with Nick [Oliveri] and Mark [Lanegan] taking vocals. Was it a little more of a personal thing for you this time around?
I mean, I think the last record was really personal, too. And because Mark isn’t in the band and Nick isn’t in the band, there’s no choice but for it to be personal lyrically and vocally. But, in many ways, it’s more of an ensemble now more than it’s ever been. Just musically. We’ve always had the same manner of doing things. If one person doesn’t back a song, we don’t do it. So those core things have always been there. But really shaping stuff, it’s really shaped by Troy and Joey and myself. I think this is a chance for me to show people what Troy and Joey can do. I think the drumming is just fucking out of control on this. It’s very specific. On the last record, it was about asking Joey to be contained and straighten out and I think coming off of Deaf where the drumming was just fucking ballistic, this is like Joey’s [Songs For The] Deaf.

Yeah, it just starts out with the first song and the beat is just filthy…
It’s arrogantly slow.

And the whole record sounds a little more lo-fi this time than the last few records. Was that just the result of recording live or was it something more deliberate?
It’s weird. People have said that they think Lullabies is glossy, and I’m like, “Are you nuts?” It’s a very natural-sounding record. To me, this record is supposed to be as if someone was clearing their throat every two seconds. And I think it’s almost like looking at underwater dirt with goggles on. You can clearly see the dirt. That drive in and out of Hollywood really shaped everything. Sonically, lyrically, everything came up like when you go up to someone on the street and say, “Hey, what’s up?” and you spit right before you say something. It felt like there was a lot of swagger there.

There is, however, a definite lack of cowbell this time. Are you anticipating a backlash?
No. I’m anticipating a tongue-lashing, which in Roman times was huge. [Laughs.]

Not even just in Roman times…
I think today a tongue-lashing can be a really positive thing. Like the more you lick ‘em, the more ya like ‘em. [Laughs.]

On that note, “Make It Witchu” makes an appearance on a Queens record after being on Desert Sessions. What made that track fit this album?
I’ve never been associated with a song that emulates screwing as good as that one. We’re gonna put forth some sort of message, and that’s “Do it.”

Also, you had Trent Reznor contribute to the title track and then ended up releasing it exclusively to fans on a website. Trent’s been bulking up. Were you afraid of his wrath and felt like you had to release it somehow?
That’s an interesting question. I’m glad you asked me that, because I never would’ve thought of it that way. [Laughs.] Trent and I have become friends since touring together and he’s one of those big-brain kids, ya know? I think he’s been working out his brain more than his body lately. His new record is so detailed. It’s just one of those things where I think the collaborations should be strange. People should be like, [nasally] “No! What?” which is inevitably what people do. These days, instead of people getting excited, they go, “Oh, come on! I would’ve done this instead.” And instead of saying, “Go do it then, you fuckhead.” I say, “No, no, no. Just wait. Wait one sec.” For me, collaborations aren’t about singling somebody out. They’re about bringing somebody in. Like a venus flytrap.

So it just didn’t fit the tone?
To be honest, I just think it’s funnier that it’s not on the record. It’s a song that could’ve easily gone on the record but didn’t fit in the sequencing that well. And to me it’s funny that the title track isn’t on the record. That either means that I have a real shitty sense of humor or that I know something extra. [Laughs.]

I guess “Houses Of The Holy” was on Physical Graffiti…
Yeah, and it almost came from that idea. It’s like, “Wait. Aren’t you supposed to… Shouldn’t you… Aw, forget it.” It’s absolutely meaningless that the title track wouldn’t be on the album. It carries no weight as far as being negative or positive, but it’s just funny. I love to fuck with boxes. It’s a natural thing to want to put something in a box so you can shelf it somewhere. I do it too. But when I’m trying to do something creative, I just look for other people’s boxes. It’s a box-opening party. It’s Christmas morn. Kwanzaa with a Hanukkah twist.

That might be the best metaphor ever.
[Laughs.] It really is.

In your ideal scenario, what would be the first words you’d like to hear from someone after they listen to this album?
Shit. That’s a good question. [Eagles Of Death Metal vocalist] Jesse Hughes–or “Boots Electric” as I like to call him–does this thing that I call the “cocksucker face,” where his mouth is open and he’s like, “Oh, yeah!” It’s so rad. I love it. Instead of a word, I’d rather just see people do that. [Laughs.] It’s like whispering “Oh yeah!” to someone from afar. It’s an internalized high-five.

One last thing before I let ya go.
I’m wearing blue.

We’re working on our 22nd anniversary issue and we’re asking people if they remember the first issue of AP they read.
Yeah.

Do you?
My first issue of AP. Fuck no! [Laughs.] No, dude. It’s a cool mag, but I don’t know if I hold the first time so close to my heart. How about I do it on the last time I ever read it. You’ll have to catch me right before I die. If we agree to meet there, at least I can plan for it.

Well, you just let me know when you’re going to kick it…
You know, I’ve been working on my telekinesis stuff and I’m thinking by the time I’m ready to go, this shit’s gonna work. [Laughs.]

That’s kind of sad that it only starts to work then…
Well, it’s gonna work earlier, but right now I’m still going through the manual.

So you’ll be well versed soon…
No, no. Not “manual.” Emmanuel Lewis. He’s the guy who’s teaching me.

I’ll seek him out for some spiritual guidance.
I know. Since AP’s 22 now, that’s old enough to go drink with him.

You know, there’ve been theories…
Some things are better left unknown.

True.
Except this isn’t one of them. I want a paternity test.

We all do.
He birthed you.

Think of the therapy.
Therapy’s the new religion that never has a cure, Tim. Sorry about that. But you know what? It’s about the struggle.

It needed said.
Or as they say, “White powder.”

They said that?
Well, they did with the whole anthrax mail stuff. Those were the days, bro. alt

Portions of this interview originally appeared in AP 228.