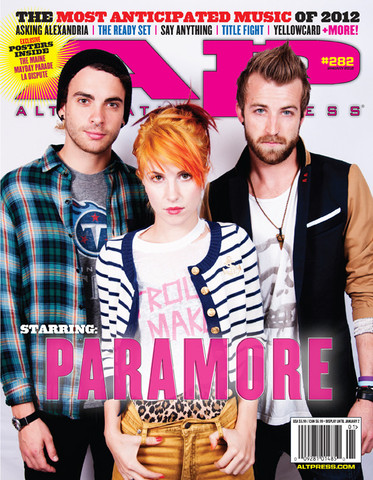 (This list was originally printed in AP 282, which is on newsstands now and available for purchase here. That's the cover, right up there. —ed.)

From splendid side projects to killer comebacks and brash upstarts to established acts hitting their high-water mark, 2011 was jam-packed with some truly incredible releases. Each of AP’s editors had a different take on just what floated their boats for the past 365 days (which you can read right here), but below are the records we could best agree on as being worthy of entering your collection. In short: In descending order, hese are AP’s 10 Essential Albums of 2011. —Scott Heisel

THRICE
Major/Minor
One of only three five-star reviews to appear inside the pages of Alternative Press all year long, Major/Minor shows a band functioning at the highest possible creative level imaginable, doing things their younger selves never could have dreamed of in terms of musicianship, songwriting, melody and restraint. Thrice are one of the finest rock bands on the planet, and that’s not hyperbole—that’s fact. (Vagrant) [SH]
GO DOWNLOAD: “Cataracts”

BOMB THE MUSIC INDUSTRY!
Vacation
The second of three five-star reviews in AP this year, Bomb The Music Industry!’s sixth album is an exercise in just how good punk rock can be when made by adults (who may or may not be smart, shithammered and/or excited by nothing). The energy is high, the songs are infectious, the lyrics are personal and the replay value is virtually infinite. BTMI! are the best-kept secret of punk rock; hopefully, that will change soon. (Really/Ernest Jenning) [SH]
GO DOWNLOAD: “The Shit That You Hate”

BALANCE AND COMPOSURE
Separation
In a year full of fantastic debuts from young bands, Separation was the best of them. Balance And Composure’s evolution from a solid-if-unexceptional emo outfit to an immense, moody, rock powerhouse is extraordinary. Led by Jonathan Simmons’ Jeff Mangum-like croon, the band expertly balance Simmons’ pronounced angst with calculated heaviness. The kicker is the band members are still so young, their next album is bound to be earth-shattering. (No Sleep) [BY]
GO DOWNLOAD: “Stonehands”

BATTLES
Gloss Drop
Seven months after its release, and this reviewer still can’t get an all-encompassing handle on Battles’ m.o. Gloss Drop is brimming with everything from prog-rock (“Africastle,” “Wall Street”), algebraic time signatures (“Futura”), chrome-plated world music (“Dominican Fade”), heavy-metal disco (“My Machines”) and concussion-grenade symphonies (“White Electric”). This is what happens when three world-class players (and some guest vocalists) are open to a myriad of possibilities. (Warp) [JP]
GO DOWNLOAD: “Futura”

JOYCE MANOR
Joyce Manor
A band who cite Jawbreaker, Green Day and Weezer as primary influences sounds promising on paper. However, lofty influences often translate to muddled and directionless songs that sound more like retreads and less like a band with their own voice. Consider Joyce Manor the exception to that rule. These NorCal kids released the best pop-punk album of 2011, using those influences (along with a healthy dose of brevity) to craft a record that’s loud but never brash, sardonic but never antagonistic. (6131) [BY]
GO DOWNLOAD: “Constant Headache”

THE HORRIBLE CROWES
Elsie
We’ve been Brian Fallon fanboys since the first time we heard Sink Or Swim, the Gaslight Anthem’s 2007 debut, and we’ve loved his band every step of the way. But we never thought his side project, the Horrible Crowes, would be on the same level as Gaslight—but it turns out, they’re better. The songs are moody and delicate, angry at times and soothing at others; the Bruce Springsteen influence is dialed down, replaced with a hefty nod toward Tom Waits and Greg Dulli. (SideOneDummy) [SH]
GO DOWNLOAD: “Ladykiller”

FAREWELL CONTINENTAL
¡Hey, Hey Pioneers!
Motion City Soundtrack’s last full-length, My Dinosaur Life, was the best album of 2010, in AP’s humble opinion. So we were pleased as punch when ¡Hey, Hey Pioneers!, the debut LP from MCS frontman Justin Pierre’s side band, Farewell Continental, landed in our laps this past May—and even more enthusiastic when we realized these songs were just as great as Motion City’s best work. It’s a bit more shoegazey and grungy and all around ’90s-y (we’re professional writers!), and we think you will love it as much as we do. (Paper + Plastick) [SH]
GO DOWNLOAD: “Who’s The Boss?”

THE GET UP KIDS
There Are Rules
Anyone hoping the Get Up Kids would re-write “Mass Pike” 12 times on their first album in seven years was probably bitterly disappointed by There Are Rules. Unafraid of distortion, indebted to askew popsters such as XTC and heavy on atmospheric keyboards—we’d like to think that’s due to James Dewees’ tenure as My Chemical Romance’s touring synth op—the album is like nothing else in their catalog. You won’t see us complaining. (Quality Hill) [AZ]
GO DOWNLOAD: “Birmingham” 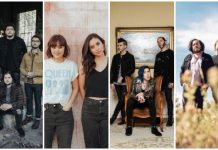