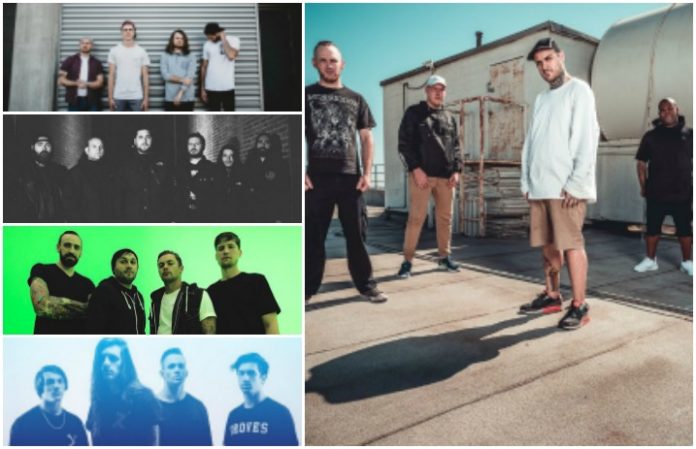 Roll up your sleeves and ball up your fists: The Carry The Flame tour begins Feb. 22 in AP’s hometown of Cleveland, Ohio, and ends exactly one month later in Tampa, with a steel-melting lineup of Emmure, Fit For A King, Fit For An Autopsy, After The Burial and Invent, Animate. To celebrate this travelling hell-fire roadshow, we asked all of the throat-shearers from these bands about the particular brand of craziness they cultivate on the road. From their choices in road food to what horrors occur in the privacy of their bunks, these dudes on this tour are fearless, fun and fuk’n insane. But don’t take our word for it…

We're excited to announce that @aftertheburial is headlining the #CarryTheFlame tour!
Tix go on sale this Friday at: https://t.co/5IaQ4OtP4F pic.twitter.com/BL5A0tCC3L

If you could be sponsored by three food chains across the U.S., who would they be?

ANTHONY NOTARMASO, AFTER THE BURIAL: In-N-Out, Buffalo Wild Wings and Sheetz. And no, Wawa is not better than Sheetz, you old-ass, porridge-eating grandpa.

Worst state to play? Country you never want to set foot in again?

SHERIDAN: I think “worst state” is debatable, because there is usually a good place in every state. I can tell you the worst show I have ever played was in West Virginia. The venue looked like it was blown up and then put back together, half the rooms had dirt floors—crazy. A country I never want to set foot in? I love traveling, so I honestly don't have an answer for that.

KIRBY: Montana. The state is gorgeous, but when you are driving down icy mountains, it’s awful. And a country I wouldn't mind avoiding would have to be North Korea, because…yeah.

ENGLISH: Hmm, I don't really want to speak ill of any state. However, as far as I'm concerned, we could never play another show in Montana again and I would be fine with that. Beautiful state though, with no sales tax! As a band, we've only been to Canada thus far, and I love that place, so I'll have to pass on this one.

NOTARMASO: Califor…SIKE! West side! Country you never want to set foot in again? So far every place has been cool to us; as long as people want to see us, I'm happy to be there.

What does your mom think of your band?

SHERIDAN: Well, that has been a long road. She doesn't really get it, but the more we have grown and gotten to do as a band, the more she sees what we are trying to do. She’s coming around. Love you, Mom.

KIRBY: She likes when we sing.

ENGLISH: Believe it or not, my sweet mother isn't really a heavy music connoisseur, but what she's heard, she’s said it “sounds like we really know what we are doing,” so she's a fan.

Fanboy out for a minute: Who would be your dream band to tour with?

PALMERI: Limp Bizkit is the only band I want to tour with.

SHERIDAN: Well, I'm gonna make this answer a two-parter. Meshuggah is for sure a band I need to tour with. They sound insane live and the music really moves me personally. It would be a lot of pressure to play as well as we could. Sometimes that is what you need to take the next step.

The second part is that there is not a band we won't tour with. You gain a lot from touring with different bands, and if there is a bigger band that is willing to give us a shot to do what we do, and learn what we can from being on the road with them, we’re down.

ENGLISH: I feel like a broken record, but my answer in the heavy music realm will always stay the same: I would absolutely be beside myself to tour with Underoath and I'll keep grinding toward that dream. Anything could happen.

NOTARMASO: Thrice, doesn't make sense but they are my favorite band so eat my farts.

Is life as crazy offstage as it is onstage?

SHERIDAN: I guess it depends on what your definition of crazy is. I'm a dad and a husband. When I'm not touring, I'm tattooing and trying to grow as a player. Joe [Badolato, vocals] is a barber, is working on his own business and has a girlfriend. Josean [Orta, drums] is a body piercer and also has a lady at home. Tim [Howley, guitar] has a small company he is trying to grow (tombstone hardware), Blue [Spinazola, bass] drives trucks and has a girl. Will [Putney, guitar] is a producer/engineer, owns a studio, has a record label, management company and is also married. So yeah, it's crazy, but a different kind of crazy. Trying to have a band, and be successful is not what it used to be. As a touring metal guy, the pay grade is less than workable for real life, so it’s a hustle. Gotta work the angles. It’s not as cool as the world thinks it is.

KIRBY: My life is as crazy as eating a sandwich for lunch when I am offstage.

ENGLISH: Yes, for sure. Sometimes it feels as if being onstage is a break from all the ruckus that life brings. Even though onstage life is loud, crazy and sometimes violent, I can forget about everything for that half hour and that's peaceful to me in a lot of ways.

NOTARMASO: I'm pretty mellow, honestly. Onstage, I turn into someone else for a bit: Anthony from After The Burial. Offstage, I'm just Anthony.