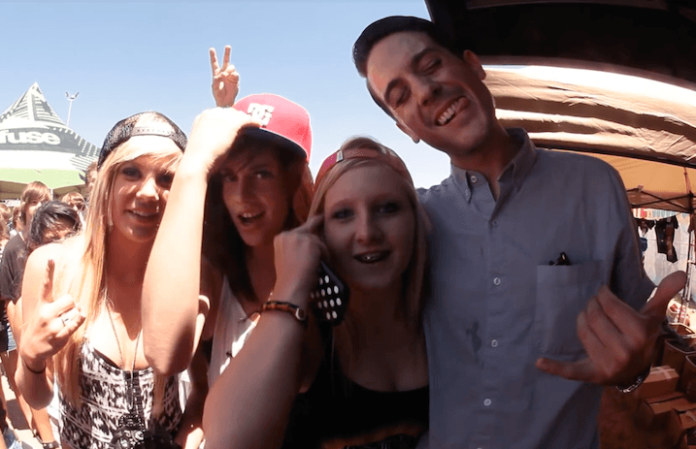 Years before topping the charts with Cardi B and collaborating with Lil Wayne, G-Eazy played alongside acts such as Taking Back Sunday, New Found Glory, All Time Low and on the 2012 Vans Warped Tour. And not just a few dates—the whole tour.

At the time, G-Eazy was promoting his first full-length album, Must Be Nice. The Bay Area-based rapper performed on the House of Marley stage all summer long with Mod Sun and T. Mills.

“Warped Tour’s kind of like bootcamp,” G-Eazy explained in an interview. “It’s a tough tour. If you survive Warped Tour, that’s how you know you really love it.” G-Eazy’s Vans Warped Tour video diaries feature appearances from Pat Brown, former frontman of Sing It Loud, clothing designer and Warped Tour merch veteran Jac Vanek and Never Shout Never’s Christofer Drew—all of whom he shared a tour bus with that summer.

A few years after his time on the tour, G-Eazy achieved mainstream success with “Me, Myself & I,” an infectious, hit single with fellow Warped alumna Bebe Rexha.

G-Eazy is one of many artists—along with Katy Perry, Green Day and Paramore, to name a few—who performed on the Vans Warped Tour early on in their career and ended up skyrocketing to worldwide fame, becoming platinum-selling artists and Grammy nominees.

If you attended the Vans Warped Tour in 2012 but didn’t stop by G-Eazy’s set or merch table and are regretting it now, hopefully you’ve learned to not overlook the up-and-coming talent featured on the smaller stages of the tour—you never know how big the band or artist will end up being, but chances are they’ll do pretty well, and then you’ll be able to say, “I saw them at Warped Tour with a crowd of 12 people way back when.”