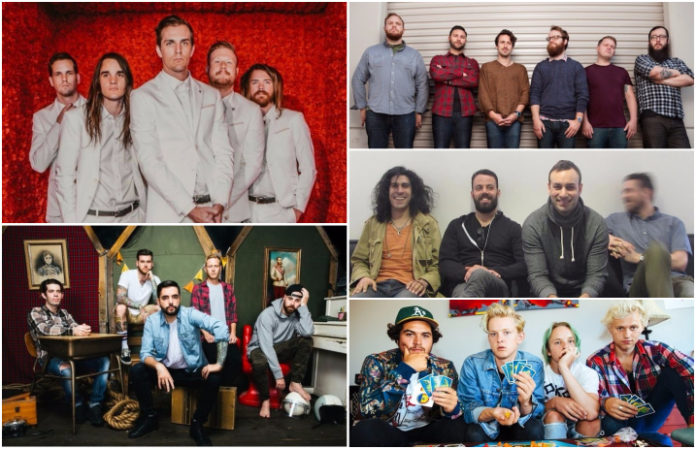 From A Day To Remember to All Time Low, we compiled a list of 14 songs with gang vocals that are irresistible to sing along to.

Just one thing before you press play: Be prepared to lose your voice.

Read more: QUIZ: How well do you know the lyrics to Brand New’s “Soco Amaretto Lime”?

The Maine – “Another Night On Mars”

From “We’ll All Be…” on Can’t Stop, Won’t Stop to “Another Night On Mars” on American Candy, one thing’s for sure: The Maine do a good job with sing-along album closers. We’re here for it because, really, is there anything better than having your friends singing along to a song about a night out with them?

Your Favorite Weapon turned 16, and we are still crying over its closing track, “Soco Amaretto Lime.” Only Brand New could make a song about being young and in love sound that sad.

The California punks manage to sound as catchy as ever while criticizing Hollywood and celebrity culture. If you say you don't scream “to the top” with guitarrists Cole and Max Becker, you're probably lying.

Paramore – “That’s What You Get”

Who can resist this song from the band's 2007 record Riot!? Not Taylor Swift, who even invited Hayley to sing “That's What You Get” with her during the Speak Now tour.

Chosing just one Four Year Strong song for this list wasn't an easy task. The band are so big on gang vocals, you can easily lose your voice trying to keep up with vocalists Dan and Alan.

Honestly, this song must have been made for a whole crowd to sing to, over and over agian. You know, Boston never drinks—or sings—alone.

A Day To Remember – “The Downfall Of Us All

Don't forget you also need to clap during this one.