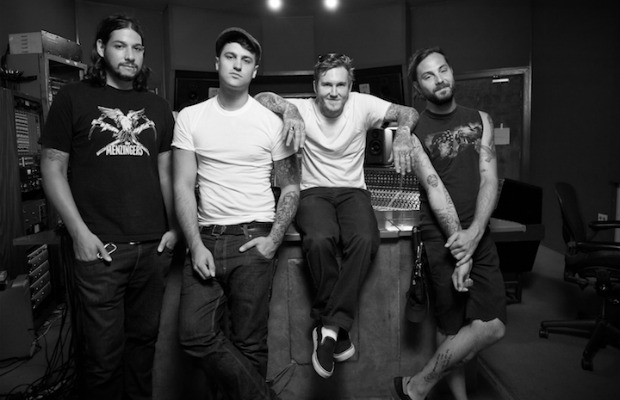 If you’ve ever seen THE GASLIGHT ANTHEM live, you know to expect the unexpected. The New Jersey quartet frequently incorporate cover songs into their set, and they play around with arrangements of fan favorites to keep the crowd on their toes. This past July, the band documented some of these left-field ideas in the studio, culminating in the six-track iTunes Session digital EP, out Oct. 18 via SideOneDummy (pre-order here). It’s the band’s final release for the label, too, as they recently inked a deal with Mercury Records. We caught up with Gaslight drummer BENNY HOROWITZ to get the scoop on his band’s new EP, their future plans and just how difficult it actually is to play a tambourine correctly. While you're reading, take a listen to an exclusive stream of a song from iTunes Session, “Our Father's Sons.”

There are some interesting choices on iTunes Session EP regarding cover songs. How much debate was there internally about what you should cover?
It was actually really easy. We didn’t really even discuss it too much. In classic Gaslight fashion, we threw a bunch of it together last minute. We’ve been covering [Tom Petty’s] “Refugee” for a while… “Baba O’Riley” we learned because we did that Who tribute at Carnegie Hall, so we learned that song for that and have kept it in rotation since. “State Of Love And Trust” we’ve been covering for a couple years now; that stemmed from a conversation Brian and I had in the van a million years ago about the Singles soundtrack and how that was the best Pearl Jam song. We were doing a little bit of [the Animals’] “The House Of The Rising Sun” as an interlude in our set, and it was just fun to play, and we realized that if you know eight bars of it and you play it the right way, you kind of know the whole thing. [Laughs.]

As a drummer, was there any sort of concern that you would have to cover a Who song? Keith Moon is in a class of his own.
Fuck no, dude. It was just fun. The awesome thing about playing Keith Moon is if you play Keith Moon right, you fuck up all the time, you know what I mean? [Laughs.] I even hit a point learning that song where I realized I had to let go to make it sound right. If you listen to the recorded version of that song, it’s not tight; it’s sloppy, but in that energetic Who way. They were a true rock ’n’ roll band. It was loose. But to answer your question in all fairness, it was a big task. The end of that song is pretty wacky. It was a cool challenge.

It was actually one of those songs I’ve loved so much for so many years that I barely had to learn it. If you’re a big rock ’n’ roll fan, it’s already inside you. My mom was a Who fan, like, a real one. I used to have this sleeveless Who concert T-shirt I rocked back in ’87 or ’88, back when they did the reunion tour. My mom went to it with one of her friends and came back with this shirt for me. I was a chubby little kid, so I got made fun of a lot [for wearing it]. I think I got rid of the shirt, which is a big blemish on my history. I wish I had a little more confidence as a kid and rocked it with pride. I wish I had it now.

I’m sure there will be some boutique that will re-create that shirt and sell it for $80. Go down to the old CBGB where the John Varvatos store is now.
I saw a $400 Clash shirt in that place! I was like, “Who the hell could even possibly buy this?” It’s just fashion at that point.

Another thing worth noting about iTunes Session is “Our Father’s Sons,” a previously unreleased song. It sounds lyrically and musically like something from The ’59 Sound. Is that where the song came from?
Yeah, that’s exactly where it came form. It was actually a B-side for ’59 Sound. We recorded a demo of that, a really old version of that song that we recently gave to Engineer Records for a Japanese tsunami relief compilation. We ended up re-recording it for iTunes because it’s kind of a cool song.

Do you think you’ll be working in all these tracks into your live set?
Definitely yes for “Our Father’s Sons” and most likely for [the alternate version of] “Boxer.” The situation comes up where, you know, you just throw in a song. We write a set, but we also pepper the set with whatever we’re feeling like. I’m almost certain that all six of these songs will wind up in a set somewhere at some point. We’re gonna have a whole lot of touring to do next year, so I could definitely see all of them being played.

Talking about next year: The big story, obviously, is that you guys signed to Mercury. What’s your 2012 look like right now?
Really loosely, we’d be recording sometime middle of the winter, towards late winter. I could see the new album coming out somewhere between mid- and late summer, and touring starting somewhere in between the two. That’s obviously a loose estimation; if December hits and we don’t have any good songs, we’re not gonna go record. [Laughs.]

Major labels have sniffed around Gaslight for a long time. What was it that made this the right time and Mercury the right label?
You’re right; they’ve been sniffing around for years, ever since Sink Or Swim came out. But ever since we signed to SideOneDummy, we closed the door on it, and we haven’t met with anyone in years about it. But we got to that point where American Slang touring was over and our SideOneDummy contract was over, and we were just honestly curious to open that door and see what the fuck people had to say. And when we opened it, we found some decent people on the other side whose views are consistent with what we want to do, who really love the band and the music, and wanna do right by us. I’m really pleased with the timing, and I’m glad we didn’t do it for American Slang, I don’t think we were ready [then]. I think we’re in a better position as people and as a band to try and tackle something like this as a band now. It felt right now, and to be honest with you, it didn’t feel right a year or two ago. But there’s something about the landscape right now with what’s going on in the industry and what’s going on with us, and it seems like it’s time to jump through that window.

I don’t know if you’ve perused Gaslight’s Wikipedia page recently, but under your name, it credits you as playing “drums, percussion and tambourine.” I want to know if you view tambourine as a worthwhile entry on your Wikipedia page.
You know what? Tambourine is some pretty serious business! I didn’t realize it until the first time I actually tried to record it in the studio. It’s actually really difficult to get an even sound and rhythm for three-and-a-half minutes. This vision you have of people jumping around the studio and hitting the tambourine is not it. It’s some nerd wearing headphones, barely moving his wrist. That being said, I don’t touch the fuckin’ Wikipedia page. [Laughs.]

In the credits for ’59 Sound, we put tambourine and church bells and stuff in it. I played keys in the studio, I’ve hit wood shoes on the floor, I’ve hit garbage cans… But that being said, if you want a reference for tambourine playing, watch the Funk Brothers documentary [Standing In The Shadows Of Motown]. There was a guy in the Funk Brothers who was a full-time tambourinist. And this guy was sick. They do a little bit about him in the documentary where it shows what he would do with his hands. In that type of music, it’s an absolutely integral part of their sound.

I appreciate that you’re bringing back respectability to the tambourine. Auxiliary percussion never gets its just due.
It’s a shame I don’t have an extra hand to rock it out live. Maybe I could teach Brian drums for a song and I could get up and do my vocal-and-tambourine stylings.

I smell a hit. Mercury’s gonna flip for it.
YouTube! alt