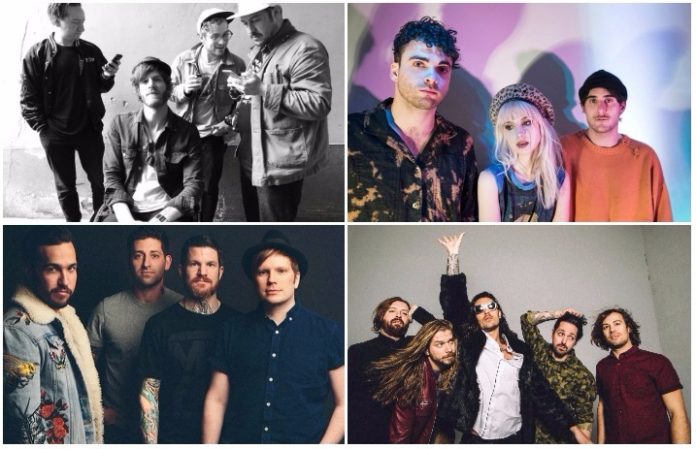 [Photo of Portugal. The Man by: Maclay Heriot/Facebook]

“Anti-genre” and “genre-neutral” are just a couple of the terms that bands and musicians have been using lately to describe their sound, instead of conforming to the generic musical genres and sub-genres we are accustomed to.

Genre crossover certainly isn’t a new thing. One of the most famous collaborations of genre crossover was when glam rockers Aerosmith decided to remake their 1975 hit “Walk This Way” with hip-hop mavericks RUN-DMC in 1986. The video itself remains classically iconic, visually illustrating the physical boundaries between two musical genres.

A newer artist who seamlessly transitions between rap, metal, rock, indie and pop is Machine Gun Kelly. Whether he’s collaborating with Waka Flocka Flame or Little Mix, covering Oasis or Blink-182 or poignantly releasing an emotional cover of “Numb” in loving memory of his friend late Linkin Park frontman Chester Bennington, MGK is completely fearless when it comes to his music and has the confidence to tackle any sound he so desires.

Here are a handful of bands and musicians who are on the same page, starting with Red Sun Rising, who have even gone so far as to start the hashtag #WeAreThread as fierce rejection weapon to fight the labeling or categorization of their music.

At Download Festival, AP caught up with vocalist Mike Protich of Red Sun Rising, who went into detail about #WeAreThread.

“#WeAreThread is kind of like an anti-genre. We don't want to be labeled as a rock band, an alternative band or a metal band. We just want to be Red Sun Rising, and that's it. That's our sound. We like to encompass all of the genres, in a way, so we kind of thread them all together. The hashtag started after our first single with Polyester Zeal, our first record. Everyone was asking us to describe our sound, and we realized from song to song, it's a lot different, so we just started saying that.

You’d think the following quote came from an interview from 2017, addressing criticism on the band’s shift in sound on the first couple singles released from their upcoming album M A N I A. But nope, in an interview with Rolling Stone in 2015, lead guitarist Joe Trohman said the following:

“I've always thought that genre was bullshit. It's best we don't worry about how other people describe us. They still call us emo and pop punk, which is pretty incredible. If those terms didn't lose their meaning when Under The Cork Tree came out, they've officially lost all their meaning now. But however people need to box us in is fine, but I don't think we sound anything like Promise Ring or other emo bands.”

Fans were quick to notice that Portugal. The Man’s recent release Woodstock was less rock and more pop than previous albums. Well, they weren’t wrong, and vocalist John Gourley spoke with Rolling Stone about how he really feels about the rock genre:

“I feel like rock ‘n’ roll has become very tame. If anybody does it right, it's hip-hop – so many hip-hop shows are punk as fuck. You have something to say? Better start rapping.”

Is anyone really surprised Paramore is on this list, though? The band’s latest album After Laughter is a straight blast-from-the-past, heavy with its ‘80s vibes. Clearly stated in Hayley Williams’ Instagram bio, Paramore are a genre-neutral band, and they’re not the only ones to embrace it. Virtually every interview and review you read online will state as such, including this review from NPR: “The band dubbed [After Laughter] ‘genre neutral,’ a surprising foray into new, straightforward music territory.

What other artists are saying “fuck it” to genres? And what are your thoughts on the necessity of genres? Weigh in.