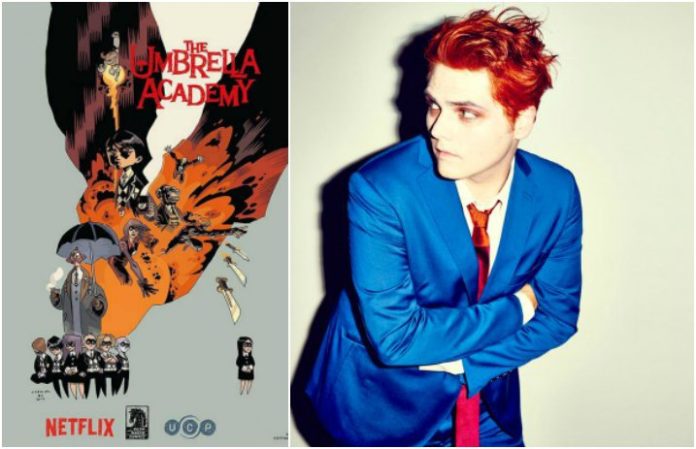 Gerard Way didn’t just release four incredible albums with My Chemical Romance; in 2007, he debuted a series of graphic novels, alongside illustrator Gabriel Bá, named The Umbrella Academy. The story follows Spaceboy, the Kraken, the Rumor, the Séance, Number Five, the Horror and the White Violin, the members of a dysfunctional family of superheroes who are trying to solve their father’s death.

Read more: 28 My Chemical Romance memes to make up for the fact that we’re still not okay

But you knew all that. Here’s what’s new: Umbrella Academy is coming to Netflix as a live-action series, and we’re sharing everything we already know about it.

When it will air

The exact release date hasn’t been confirmed yet, but it’s definitely sometime in 2018; and the series already has an official Netflix page, which means it could be coming sooner than we expect.

Where to watch it

Netflix. It’s a Netflix original, after all.

How long it’s going to be

Ten episodes have already been confirmed for the series. We have yet to learn how long these episodes will be and if there’s a chance of a second season.

In 2016, screenwriter Jeremy Slater (Fantastic Four, Death Note) told Collider he wrote a pilot for the series. “I took the job because I’m such an immense fan of what Gerard [Way] and Gabriel [Bá] did with that book. It’s one of those things where I would rather be the guy to screw it up than sit back and let someone else come in and do the bad adaptation,” he said. “I was really adamant about taking the job, but the only way I was going to do it was if I could make it weird and make it true to the spirit of the book. There’s a lot of weird shit in The Umbrella Academy, and it would be very easy to sand down some of those weird edges and make it more familiar to American audiences. I’m fighting very hard to not let that happen.” According to Variety, Slater will be writing all the episodes.

Who else is involved

From Netflix: “A dysfunctional family of superheroes comes together to solve the mystery of their father's death, the threat of the apocalypse and more.” It’s the same as the comics, but it’s something still exciting to know, right?

Gerard Way shared it on Facebook in July, and we are still in love with it.

By that, we mean it’s going to be a live-action show, which means the way the characters are presented will probably differ a little from the comics.

USA Today reports Netflix picked up the series due to its unique visuals, which also hints to what the show might look like. “What drew us to The Umbrella Academy is that it’s wholly unique, visual and stylized,” said Cindy Holland, vice president of original content for the streaming company. “These aren’t the usual superheroes, and this series will embrace the singular tone of the graphic novels—dark yet humorous, supernatural yet grounded in reality.”

Who has the lead role

Ellen Page has been cast as Vanya Hargreeves, the black sheep of her dysfunctional family of superheroes, known as the Umbrella Academy. According to Den Of Geek, Vanya, who is estranged from her family because she doesn’t have powers, is an important character because “she goes through a bit of self-discovery that puts her at odds with the superheroes.”

Who’s been cast for other roles

Tom Hopper (Game Of Thrones), Emmy Raver-Lampman, David Castañeda, Robert Sheehan and Aidan Gallagher will be joining Ellen Page. Hopper will play Luther, who is “resilient, a workaholic, and possesses the ability of heightened physical strength,” according to Deadline. Castañeda’s character, Diego, was described by the website as an “intense vigilante who has a real problem with authority.” Raver-Lampman will take the role of Allison, who “refuses to use her power as she seeks a more authentic life,” writes Deadline. Sheehan will play Klaus, who Deadline describes as a “a classic ‘middle child’–a disarming pleaser who is seemingly everyone’s friend, but will rob you blind without thinking twice.” Lastly, Gallagher was cast as Number Five, “a 58-year-old man trapped in the body of a child.”