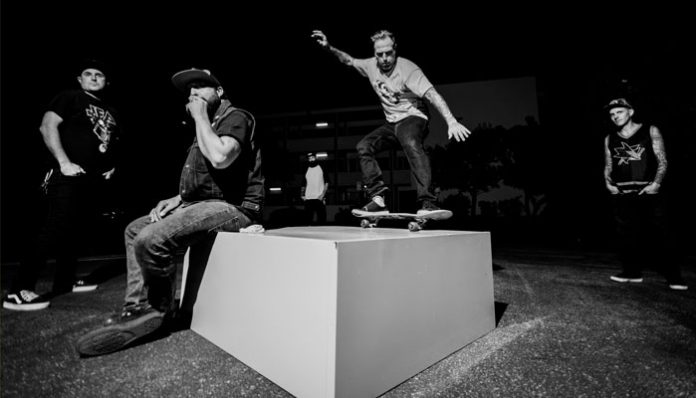 Something unusual happened during the making of Get Dead’s video for “Glitch.” Actually, it feels like everything surrounding the making of the song and the video was unfortunate. None of that was going to stop Alternative Press from premiering it, though. “Glitch” is the latest single from the band’s new album, Dancing With The Curse, and honestly, it’s a bit melancholy.

The song feels like a great-grandson of the Replacements’ “Skyway,” which conveys a sense of longing. Not the kind of thing you’d modify with the p-word. Then again, if Get Dead want to call themselves that, we’re sure AF not going to tell them they can’t. In addition, lead singer Sammy King says the label has the song title wrong. The video consists of rediscovered found footage. It’s all part and parcel of Get Dead’s glorious attitude.

“Producing Get Dead is like parenting a teenager,” Fat Wreck Chords co-owner Fat Mike says. “I set them up with a nice dinner, we sing songs around the piano and they sneak out after curfew to shoot PCP and fight walls with spray cans and fists. Somehow they make it home before school starts, but they’re bleeding from every orifice. I thought ‘Glitch’ represented this.”

We asked vocalist King about what he thought the song represented. And a few other things.

What is “Glitch” about? Is it a metaphor for what the pandemic has done to both personal and band life?

Not at all. [Laughs.] Also, the song’s called “Western Glitch.” I’ve told the label this like 50 times. But once a nickname sticks, it’s an uphill battle. Now that I think about it, I really hope it is too late to correct it. I’m a sucker for a good snafu.

Anyway, it’s about being on the tail end of a relationship and trying to traverse home life with road life. That whole “distance makes the heart fonder” bit, in my experience, is pretty spot on. When you’re home and in that day-to-day grind with someone you love, after a while it gets super-easy to lose sight of the reason you shacked up to begin with. Those good times become less frequent and give way to stress, anxiety, responsibilities and all the other things that tear people apart. Mistakes carry weight, and eventually that weight becomes too much for two people to carry.

The song is just over two minutes. Did you say everything you wanted to convey? It did feel like there could have been more to the story.

That was a conscious decision to leave it open-ended. When it comes to these matters, they always are.

What’s the source material for the video? Did somebody have old ’70s Super 8 footage of life in California? Was the idea to conjure memories of an era that didn’t really exist in the context of the song?

Me and the ex went on a bike ride one Saturday morning, and I bought a bowling ball bag from a garage sale. There were rolls of Super 8 film in it. Sent them off to get transferred to digital, and they got lost in transit somewhere. Fast forward a year, and I got an email from the company saying they located and transferred it. I had just finished the song, and before I saw what was on the footage, I decided whatever it was would be the video. So everyone should be super-relieved it wasn’t some beastiality snuff film from the ’70s.

Are you champing at the bit to get back in front of audiences again? Or are Get Dead patiently waiting for the all clear? It has to be rough having a record ready for release and you can’t bring it to the people. Or are you feeling significantly different?

Get Dead and patience have never really seen eye to eye with each other. We are a bunch of adults with ADD drinking Jolt Cola, trying to push circles through squares. Personally, I couldn’t care less about an album release during COVID. People need new music more than ever now. Yeah, it sucks to not be able to tour it immediately. But I’m interested in what it’s all gonna be like in the post-COVID tour world. People will have had time to absorb the songs, and when these bastards let us out of our cages, and borders open up again, I tell you what… [Ric Flair voice] woooooooo! The energy is gonna be something not many get to see in their lifetime. [Back to Ric Flair.] Wooooooooo!

Fat Mike worked on your record. What’s the one thing you will forever thank him for and the other thing you will hold against him for the rest of your life?

Cocaine and cocaine. [Fat Wreck Chords lawyer’s voice] These views are Sammy’s and Sammy’s alone. They do not reflect the behavior or actions of any of the other members in Get Dead. No one likes a tattletale.

Get Dead’s new album, Dancing With The Curse, is available Oct 9. You may get it here. Check out “Glitch” or “Western Glitch” below.