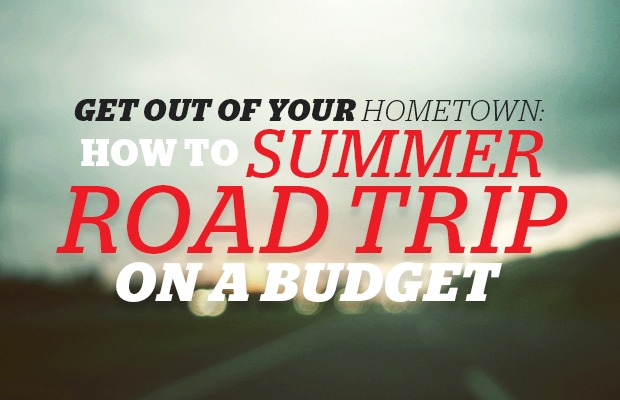 Summer should be synonymous with traveling adventures. From going on a road trip to a new city with your closest friends to bussing to different parts of the country for a music festival—there seems to be no limit on what can be experienced during summer months. That is, no limit except for money. Traveling can be expensive, but it doesn’t need to be. Want some quick tips on how to travel on the cheap this summer? Check out these ways to cut corners on cost and come home from your big summer trip with a little cash left over.

The cheapest—and arguably most fun—way to road trip is by, well, car. Find a friend with a fuel-efficient vehicle and split the cost of gas. Say you and three of your best friends hop in a 2008 Civic—which gets about 13 gallons of gas in one tank. One tank of gas—costing $2.50 a gallon—is about $32.50. Split that four ways and it’s just over $8 a person. One tank of gas in that Honda Civic lasts for about 468 miles. It’s only 491 miles from Tallahassee to Nashville. It’s only 488 miles from Tucson to Los Angeles. It’s only 2,064 miles from Chicago to Seattle—that’s 4.5 gallons, or about 38 dollars a person. The best way to travel cheap: find a friend with a fuel-efficient car and a gang of cronies to split the cost. Disclaimer: don’t kill each other over the playlist if you do choose to drive 2,000 miles together. There’s always that one person who wants to listen to Taylor Swift’s 1989 on repeat. Everyone loves T-Swift, but please don’t be that person.

Not into cars? There are other options. Give Megabus a try. Megabus is as close to the luxury version of traveling in tight quarters down a highway with a collection of strangers as you can get. The sweetest deal: If you book far enough in advance and are traveling a short enough distance you can go one-way for a $1. Yes, a buck. Follow Megabus on Twitter to keep an eye out for deals. Even when seats aren’t running for a buck, it’s usually reasonable. You could go from Pittsburgh to New York City for $20 round-trip if booked far enough in advance.

And if you’re totally determined to fly there are affordable options for that, too. While nowhere near as affordable as splitting the cost of gas or buying a bus ticket, some airlines specialize in affordable options for those flying solo. Allegiant Air is one of those airlines—a weekend trip from Moline, Illinois to Las Vegas can be as cheap as $200 if you pick the right weekend at the right time. A trip from Cincinnati to Tampa could run even cheaper, at roughly $150. If the parking at the airport is affordable and you utilize public transit to wherever you fly, these flight prices won’t break the bank.

Let’s face it: we’re all guilty of being hangry at one point in our lives. Food can make or break everyone’s spirits during the trip. Food can also be one of the toughest things to budget on a trip. You don’t want to survive off of fast food alone, but you don’t want to break the bank on going out to elegant restaurants every meal, either.

Pack perishables. Peanut butter is your friend. It doesn’t go bad easily and can be put on pretty much anything. Avoid bread because people tossing around bags can smash it easily. Try crackers or tortilla chips (seriously, just try it) instead. Cases of water—albeit heavy and large—are also affordable. Then there’s always the option of buying some cheap, store-brand soda. Avoid pricey energy drinks and snacks from convenience stores; the price isn’t all that convenient. Buy candy and snacks in bulk before you leave instead. Be thoughtful of things that are affordable, filling and can last in a car—like large bags of cereal or sweets you can bake at home before leaving.

Embrace fast food. Fast food is inevitable. Everyone has his or her favorite, and that’s okay. A $5 foot-long at Subway isn’t too outrageous to pay for a meal and is ultra-filling. Looking to go even cheaper? Try two-for-a-dollar tacos from the value menu at Jack In The Box. Value menus aren’t hidden, find what you like and go for it. Cut costs off your meal by ordering water instead of soda and sticking to the value menu instead of the numbered meals.

If you’re dining out, keeps your eyes peeled for specials. If you’re looking to try something local and fun, call ahead and find out about special meals. These can range from daily to seasonal, to buy one get one free to half off after a certain hour on weeknights. It never hurts to ask. Also be aware of chain sit-down restaurants that run specials, like half-price appetizers from Applebee’s after 9 p.m.

Finding affordable lodging isn’t as intimidating as most would assume—there are options from totally free to reasonably affordable, all depending on your traveling comfort level.

People – who are into meeting new people and want a free place to crash – should try couchsurfing.com. This is a social network built on the trust of strangers looking for a place to crash. You create an account, login and connect with people who want to share their homes with the follow wanderlust. You very well could meet your next best friend by surfing on his or her couch.

While not as open and free as couchsurfing, hostels are another reasonable option. A hostel’s similar to a dorm for people traveling inexpensively; it’s an open community of travelers paying a fee smaller than what a hotel would be, while also getting less luxurious amenities than a hotel offers. A hostel for one night in Austin, Texas can run at around $30 per person. A hostel for one night in New Orleans could be as cheap as $17.

If both of these options still seem to be too open, then try bargaining with a hotel. If you come late enough and leave early enough, hotels will lower the price. Say it’s 11 p.m. and you’re looking to pull over for the night—call the hotel and tell them the price you’re looking to pay. You could turn a $100 room into a $50 room, saving everyone in the group cash for more fun things. They’d rather have someone in their room for 9 hours then leave it empty all night. Also, utilize tools like Kayak and Hotels.com—deals can pop up online that are too good to turn down.

All good entertainment comes with a price, right? Wrong. Every city has free or affordable options for entertainment. You don’t need to spend $200 on a VIP pass to a music festival to have a good time with your friends.

Check out a local park or beach. Visiting them is normally free and is a fun way to see things you probably wouldn’t see back home. Places like Butterfly Beach in Santa Barbara, California lets you catch the west coast sunset. The Great Smoky Mountain National Park in Tennessee lets you see a bit of backwoods beauty at no cost. Take a turn off the beaten path and try one of these places.

Sports lovers can’t go wrong with a minor league baseball game. While not free, minor league games are about as cheap as professional sports entertainment comes. It’s only $8 to see the Louisville Bats on a given weeknight. And even if you’re not into sports, going to a ballpark is a good excuse to explore a new downtown area, as most parks are centrally located within a metropolitan area.

Lastly, and most importantly, check out the local scene. Go to the local record store and dig through the bargain bin for cheap finds. Talk to the people at the store and find out what the local music culture is like. Pay $5 and go to a local show—you new favorite band could be playing right down the street that night. Explore the local venues and meet new people who love music just as much as you do. Turn your road trip into a chance to support independent music and discover new bands simultaneously.

Apple Music is running a free three-month trial right now until the end of the summer, giving you access to millions of songs at no cost. That’s right: stream any song from your phone into your car stereo for free, even T-Swift (in moderation).

Spotify also offers free service, or a premium subscription for $10 a month. This allows you to load music to play in “offline” mode, which comes in handy when you’re traveling through an area with little to no phone signal. Students can sign up for Spotify Premium at discounted $5 a month, as well.

If all else fails, just grab your old case of CDs and go. The road is waiting.