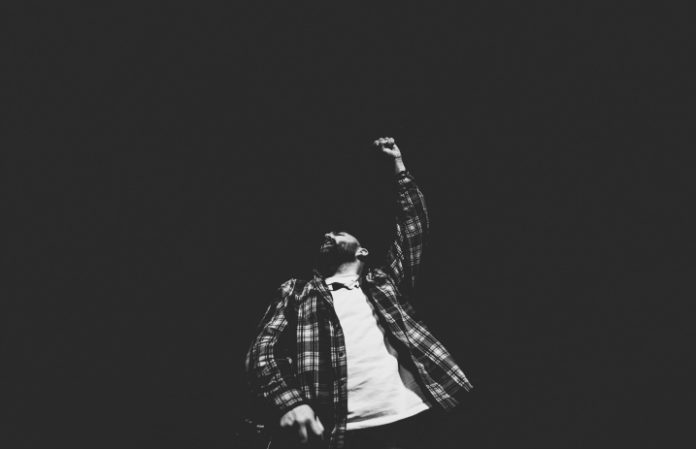 Everyone’s had those days, when you feel like the whole world is against you and everything you touch turns to shit. For Alabama metallic hardcore crew Gideon, a slew of such days in 2016 inspired the lyrical content of “Cursed,” which AP is exclusively premiering off of their upcoming album, Cold. “This song is about bad luck. We went through a streak where it literally felt like everything we did went wrong, and anyone we came into contact with experienced bad things,” says drummer/lyricist Jake Smelley. “We had a van get robbed at our guitarist [Tyler Riley’s] house, and we had a van also get robbed at our singer [Daniel McWhorter’s] house, and at the same time tons of things were going wrong in our personal lives. Then we went on tour, and we had about $8,000 worth of stuff stolen from us in California, and in the same week we headed into Canada and totaled our van! When all of that happens, you feel like a black cat, in a way, and you almost don’t want to be around anyone in case it rubs off on them, too.”

Luckily, they did not pass their bad luck onto Knocked Loose, their tourmates at the time. In fact, the fast-rising Kentucky hardcore mob helped them deal with the situation, and while still in the process of writing the track, Smelley knew that singer Bryan Garris had to feature on it. “They’re also a bunch of country boys from a small town, and we’ve grown really tight with them. We already knew we wanted Bryan’s vocals on one of the new songs, but as I was writing ‘Cursed’ I knew he had to be on that one. He went through that with us, so he’s a part of the story.” With Knocked Loose doing pre-production for Laugh Tracks at producer Will Putney’s New Jersey studio as Cold was being tracked, Smelley and the vocalist spent many nights up on the roof talking and strengthening their bond, though Garris did not track his vocals until after Gideon departed. “Will wanted to make sure that Bryan’s voice was good to go when they started tracking, and when we first heard it on ‘Cursed,’ he totally killed it. His voice is so raw and mean, and it cuts through everything.”

Writing freely about negative experiences such as these has been somewhat revelatory for Smelley and his bandmates. Having always put a positive spin on bad situations in their early output, they took their first steps in a “darker and more personal” direction on 2014’s Calloused, and this time around they felt that it was imperative to not hide anything from their listeners. “Some days I’d be writing something and going through some real shit, and not feel like turning it into something positive. This whole record was about being totally honest, and some of what you go through is just going to feel negative. But there are still songs about pushing through and overcoming fear and weakness.”

One such track is “Freedom,” which features the inimitable bellow of Hatebreed’s Jamey Jasta. “Where we come from, anyone who tries to leave and better themselves gets shit talked about them, and this song is about not letting any of that drag you down.” They make this very clear with the lyric “Let them talk, the words mean nothing at all/Let them walk, never been one for the deadweight, let them fall.” Smelley asserts the importance of aspiring to “be who you’re meant to be, no matter what,” and hopes that this will connect with fans from similar backgrounds.

Though the members of Gideon count Hatebreed as one of their main influences, they had no personal connection with the band, and it was in fact Jasta who set the proverbial ball rolling, after playing “Bad Blood” (from 2012’s Milestone) on The Jasta Show podcast. “After playing it, he said something like, ‘What would Hatebreed fans think if I was featured on an album by a band like this?’ We were all like, ‘Whoa! That would be crazy if that happened!’” Having reached out to Jasta through mutual connections, he was happy to lend his voice, the band sending him the track and lyrics and eagerly awaiting the results. Smelley admits he still gets chills just thinking about first hearing Jasta screaming lyrics he had penned. “It was unreal, it was humbling and so exciting. When something like that happens, it really does make you feel like literally anything is possible.”