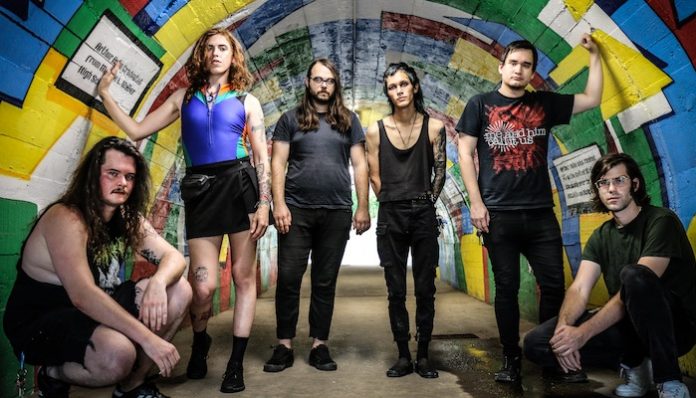 Richmond, Virginia’s thrash/grind/noise assault corps .gif From God are the kind of band who give your brain a repetitive-stress injury. Cerebral tunnel syndrome, anyone?

The video we’re premiering today, “Sassafras Manassas Ass,” feels like being in an 83-second street race going 800 mph with all the irregular heart beating, nausea and wind shearing of your face in full glory. (Fun fact: The land speed record on Earth is 763 mph). Artist Morta Sustain created the video for the downstroke ’n’ digi-noise team for maximum serration of your retinas and ear canals.

“‘Sassafras Manassas Ass’ is the extracted, redacted and refracted version of [the version] from the 2016 winter tour tape,” a transmission from the .gif hivemind says. “It has been heavily modded with nitr0-bass-b00st tech almost beyond recognition, save for its savory bones. Pump yr brain full ’o some primo petrol and zone on out to the robot stomp. We haxxed this vid onto yr server staxx, bc we thought it would be a cool trick. Slurp ya later, sickoids.”

Check out the vid, and if you’re in their particular region in October where Styx and Acheron intersect, you can see .gif FG on tour with Florida grind aggregate c0mputer.

The next .gif From God album, approximation_of_a_human, will be issued by Prosthetic Sept. 27 with preorder here. The record will certainly be as much fun as pushing your worst enemy’s face under a leather-piercing sewing machine needle.