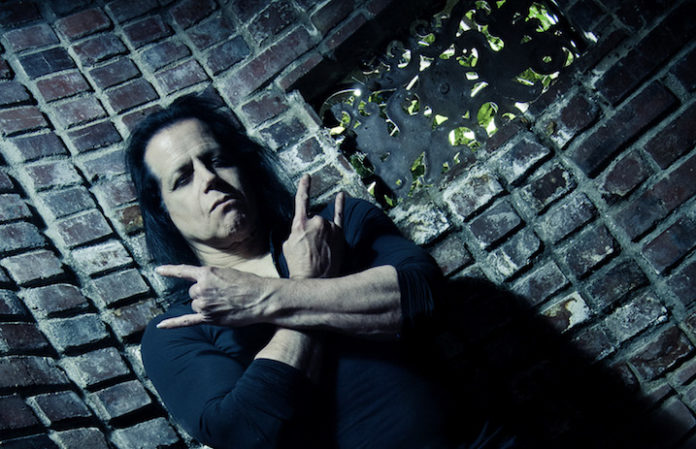 The last thing you would think to call Glenn Danzig is happy. This is a man, after all, who put on his own festival called The Blackest Of The Black this past May in an a dusty old SoCal ranch. In our eyes, Danzig is supposed to exude total murk and darkness, period. So, it's disarming, if not also a little bit awesome, to hear the guy actually laugh, and express an overall sense of gratitude, when talking about the past year of his life.

In that time, the 62-year-old frontman famously reunited the Misfits at last year's Riot Fest with bassist Jerry Only and guitarist Doyle Von Frankenstein, after a staggering 33 years apart. From there, he finished up work on the 11th album with his longtime solo vehicle, Danzig. That effort, Black Laden Crown, was arguably the most critically acclaimed album he has released with the group since their commercial heyday in the early '90s, when the clip for “Mother” was airing every 30 seconds on MTV.

Then, last week, he began the first few dates of a limited fall tour with Danzig, which will include a special performance of the band's brooding masterpiece, Danzig III: How The Gods Kill, in its entirety this weekend at Riot Fest. In talking to the punk icon for our extensive oral history on Riot Fest, AP also asked Danzig to reflect on the year he has had since reuniting with the Misfits, in particular what he has been up to with his eponymous group, as well as what it means to have so much interest in his work all these years later.

I look at this last year, and it seems like the busiest period you’ve had in a long time—between the Misfits and Danzig and your own festival, it has been a lot.
It just worked out that way. Black Laden Crown was finished while we were rehearsing for Riot Fest [last year]. The fact that it has been received so favorably is awesome. But it just creates more work. [Laughs.] It’s okay, because I am not going to do a lot of shows. There’s maybe eight dates total. I am not staying out for a month, just banging out dates. That’s not going to happen.

Earlier this year you also launched The Blackest Of The Black as a full-on festival in California. What was the impetus for starting your own festival?
Well, that was how Blackest started originally. We did two shows [in the mid-’00s]—one at Universal Amphitheatre [in Los Angeles], and one at the Mesa Amphitheatre in Phoenix. The idea was to have a festival like the festivals in Europe. We didn’t have anything like that at the time. It was all corporate—and pay-to-play, in most cases—festivals. You would never see black metal or heavy metal or darker bands on these bills. So, this year, I was able to do it the way I had always envisioned it.

What was the biggest challenge of putting it on this year?
People’s availability. That’s your big issue. [Laughs.] I forget how many bands we had. [It was] something like 30 bands over two days. So, I can just imagine [what it’s like booking a festival like Riot Fest]. I see the list of bands for Riot Fest this year and I can barely read some of the names at the bottom. [Laughs.] It’s so many bands. It’s insane.

Both mentally and emotionally, what does going back to a record like that do for you?
It doesn’t do anything. I just go in there and do it. [Laughs.]

It doesn’t bring you back in any way?
Well, any of those songs may or may not. Usually you’re in the moment, or at least I am, onstage. I am connecting with the audience and playing with the band. Very rarely while you are onstage does it bring back memories. [But] sometimes it does. Like, there is this big festival in Finland that we do a lot. It’s called Provinssirock and it’s probably my favorite festival in Finland. You know, playing there this year brought back a lot of memories.

You have always seemed like an artist who would span generations, and this year you entered your 40th year releasing albums. Did you always think you would be doing music all these years later?
Ummm… no. [Laughs.] I always knew I wanted to have a career. One of the reasons I ended up signing with Rick [Rubin, Def Jam Records co-founder who put out Danzig’s records in the ’90s] was he saw what I wanted to do. I wanted to be like bands like the Velvet Underground or Led Zeppelin. People kept going back to their music years after their albums had come out, and that is what I wanted. That was how he saw it also. Rick and I, when we talked, he said, “I see you guys putting out a record and then going on tour. If it’s a hit, great. If it’s not, when you are done touring, you go back and do another record.” [It was] just like AC/DC or any other band. If it’s not a big hit, then go back and do another record and go back out on the road. That is how I saw it. That is how I did it. And it worked out. [Laughs.]

When I look at the music you have created with all of your bands, if the goal was to have people come back to that music, you know, forever, I do think that has been accomplished.
It’s definitely been accomplished. It’s great. You know, to this day I am still getting licensing requests for “Mother,” like three or four a month. It’s probably the biggest song of my career.

Do you ever think about the idea that your music will outlast you?
I mean, I am always blown away. A friend of mine sent me a link [recently]. He was like, “Look at these little college kids…” and they were doing this classical, hymn-y version of [the Danzig song] “Let It Be Captured.” [Laughs.] I dug it so much I put in on the Danzig website. It’s incredible. It just amazes me sometimes to see the people that have been influenced by the stuff you do and the songs you’ve written. It’s fantastic. It’s something cool about music that I don’t think people who don’t like music [could ever] understand. ALT

“It just amazes me sometimes to see the people that have been influenced by the stuff you do and the songs you’ve written.”