To say gnash’s debut full-length we is highly anticipated is an understatement. The singer-songwriter has been inspiring the build-up with his three EPs—u, me and us—released over the course of several years since 2015.

With the new album comes a new set of gigs deemed The Broken Hearts Club tour, and gnash is partnering with AP to give fans an inside look.

As for the tour’s name, it’s taken from one of gnash’s tracks that he especially wanted to bring to life.

“The Broken Hearts Club is a place I wanted to create in a real life for people since I wrote the song,” he says. “This tour does that properly and provides a place for people to hopefully feel a little less lonely and maybe even make some new friends in the process.”

The tour is constructed to be more than just a live show, with gnash describing it as a “portal to a different world.” The track’s video directly inspired the tour’s setup as he wanted it to feel like fans are living within the clip.

“I want people to feel like they’re walking into the video, so we create that experience for everyone every night,” he explains. “There’s little Easter eggs hidden all over the venues for people to find, from balloons to messages in the bathroom if we’re allowed. I don’t want to give too many away, [but] we just want people to leave feeling great, because that’s what our concerts are all about.”

There will also be an arts and crafts VIP package as well as a post-show Broken Hearts Club meeting, the latter of which allows gnash and his fans to meditate and discuss their emotions.

gnash plans to switch up the setlist each show, but singles “the broken hearts club,” “imagine if,” “dear insecurity,” “nobody’s home” and latest “t-shirt” are bound to make a few appearances.

gnash recently paid homage to some of our scene favorites with the “t-shirt” video, something he says summer tourmates All Time Low inspired.

“The idea actually came from watching All Time Low’s ‘Weightless’ video, with the font over people’s heads of their thoughts,” gnash reveals. “I was just like, ‘Damn, this is so iconic. I want to find a way to pay homage to these videos I grew up on.”

gnash is sharing an inside look at everything The Broken Hearts Club tour entails, which you can check out below. 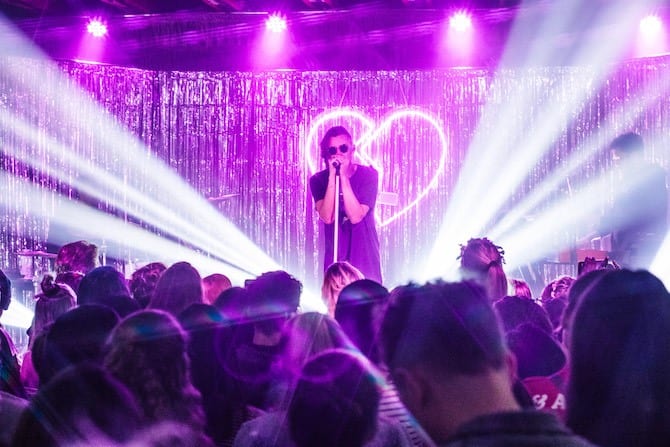 we is available here now, and gnash will be on the road through February. Check out the full list of dates below with support from Mallrat, Guardin and Carlie Hanson, and you can pick up tickets here.