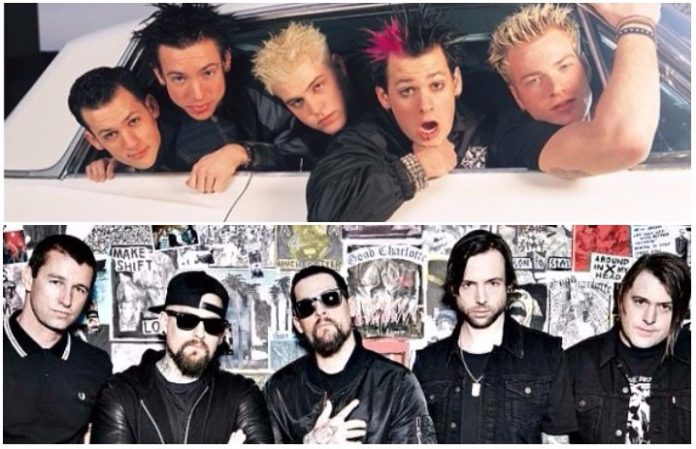 Every band has that one album that makes or breaks them; the one that's their chance to hit the big time and prove they're deserving of your attention. From Blink-182’s Enema Of The State to Jimmy Eat World’s Bleed American, every band has that album that draws them to the mainstream. More often than not, it happens by accident. Obviously, every band wants a hit, but going into the studio with that specifically in mind is considered bad form and doesn't make you a “real” musician (whatever that is).

Read more: QUIZ: How well do you know the lyrics to Good Charlotte’s “The Anthem”?

When Good Charlotte entered the studio to record The Young and The Hopeless 15 years ago, that's exactly what they did. Driven by the want to get out of the poverty they were living in, and wanting to put their stamp on the world, everything was focused on making a hit. And a hit they did make.

What they did at the same time, though, was isolate themselves from their peers. Something didn't quite sit right with everyone about what they had done. After all, no one could argue they hadn't achieved their goal. Billboard reported that first week sales came in at 117,000, putting them at No. 7 on the Billboard chart. A year later, they sold a massive two million copies — numbers that are almost unachievable these days.

The Young and The Hopeless is also the album that gave us now generational-defining behemoth singles “Lifestyles Of The Rich And Famous,” the-aptly titled “The Anthem” and the generational love song “Girls & Boys.” While the former is the one that shot Good Charlotte straight into the zeitgeist with its attacking lyrics that were easily remembered, yet held a witticism that was far overlooked, the following two are the ones that cemented their mainstream stay.

“The Anthem” was a literal calling card for the disenfranchised youth, with its unforgettable outro of “another loser anthem,” which reinforced the idea that Good Charlotte was going for status. While “Girls & Boys” broke down the differences between the sexes into a chorus that was equally as catchy as it was ahead of its time for equality.

There was no real reason for Good Charlotte to not be revered, yet they found the critical aspect of the game wasn't taking to them. The album was referred to as being “cliche-ridden” and “Green Day-lite,” amongst other unfavorable opinions.

So how did Good Charlotte come to be one of the biggest icons in pop punk?

Well, firstly, the fact they'd actually gone and made a hit gave them a leverage that no one anticipated. The aforementioned singles that jettisoned them into in the mainstream may not have broken any moulds, but they anchored on something much larger than that: relatability. At the time, every alternative kid who was due to enter their teenage years, the ones who battled against the mainstream, loved the idea of a band that both looked and sounded like Good Charlotte, attacking the drain on the culture known as “celebrity.” While they were considered uncool because they weren’t genre-breaking or held a reverence of bands like Nirvana, Blink-182 and every other cliche-school-years band you can think of, everyone held a soft spot for them because they were saying something no one else was.

If something is so catered to everything you believe in, after a while, you give in to it. Everything about Good Charlotte represented the alternative.

Just look at them. They were everything your parents hated about alternative music, and they knew how to play up to that. Though, there was still a stigma attached to them, even amongst the kids who should've latched on to what they were selling. They were strangely still uncool, which made them somehow cooler, like a contraband pop-punk band.

Secondly, beyond the obvious singles, the album is littered with lyrics that are literally meant for the young and the hopeless. The overt romanticism that usually grips young teens is rife in “My Bloody Valentine” (“He dropped you off, I followed him home/Then I, I stood outside his bedroom window/Standing over him, he begged me not to do/What I knew I had to do because I'm so in love with you”), while the totality of accepting peace and death in “The Day That I Die” (“You know the happiest day of my life/I swear the happiest day of my life/Is the day that I die”) gave comfort to the tough times that are attached to growing up.

Even directly approaching the absence of their father growing up in “Emotionless” (“You broke my Mother’s heart/You broke your children for life/It’s not ok, but we’re alright”) felt incredibly vulnerable. The people Good Charlotte are for aren’t the critics; they’re for the people who needed, and still need, a voice. On the surface they may have seemed a throwaway kind of band, but when The Young And The Hopeless finishes playing now, after 15 years, you realize they offered so much more.

That’s the key part to anything based around emo or pop punk: It has to relate directly to a feeling that you have inside. That’s exactly why Good Charlotte managed to claw their way away from being a moderately received band, one who was bottled on stage at Reading & Leeds festival when they played in 2003, to being a powerful entity that’s revered and celebrated worldwide. You’ll be hard-pressed to find an emo/pop-punk/punk/rock/alternative etc. dedicated night that doesn’t have the iconic pounding drum intro of “Lifestyles…” ring out.

Fifteen years after entering the studio to record this defining album, Good Charlotte are now pop culture icons of their own volition, and all through straight-up hard work. While it may not have sat right at the time, looking back it’s clear they saw their chance and took it. Now a household name, they knew that success only comes from persisting, so they came back two years later with The Chronicles Of Life And Death, which featured a direct comeback at all the hate and pressure that came from The Young and The Hopeless in the form of “I Just Wanna Live.”

While the journey may not have been easy, completely contradicting the idea that they chose this route to avoid any struggle, the reality is they put themselves in the firing line of the critics and peers, which is just as difficult to break free from. But more importantly, they wanted a hit, and they got one.