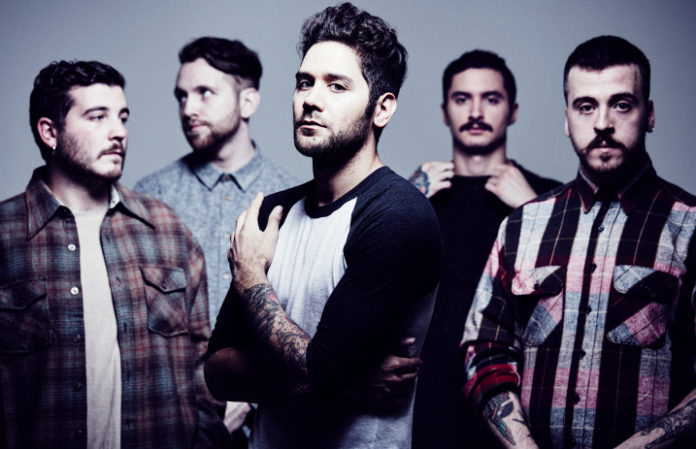 An empty birdcage, a few sledgehammered walls and a cake. No, it’s not the beginning of a curious riddle, but some of the key components in Good Tiger’s new music video for “Aspirations,” the fifth track off of their debut record A Head Full Of Moonlight.

“The concept was really driven by the director, Stuart Birchall,” says guitarist Derya “Dez” Nagle of the clip, “[He’s] done Bring Me The Horizon, Architects and a lot of other bands out in the UK. Having the shallow shots of Elliot (Coleman, vocals) against these stark and desaturated looks of an empty house and the girl and the kind of abject imagery that goes with that [help] set this mood of distance, longing and being alone, essentially—and the kind of issues that come with that.”

While some bands are very straightforward with their music videos, Good Tiger take a more artistic approach, instilling commonplace objects with deep meaning. “The imagery is kind of built around the idea of the main figure—the self—being godlike, essentially,” Nagle explains. “That’s an introspection into the potential downfall of what that kind of experience could actually lead someone to feel like.” These kind of weighted, philosophical questions turn a girl with a cake into a much more striking symbolic image than one might ever expect.

“That’s something that makes you feel slightly awkward, I suppose,” Nagle muses of that moment in the video. “The idea of destroying something which is supposed to be nice and the feelings that are attached with that, as well. The playoff between the female character and Elliot demonstrates the lyrics in the chorus of trying to build a world with someone and then destroying it.”

While all of this can be found within the lyrics (“I would like to build this world around you/ And I would like to crash this world around you”), the very technical metal riffing and some frosting, what you might not know is that Good Tiger’s journey thus far has had more to do with the culinary world than just pure symbolism. The band—Elliot Coleman, vocals; Derya “Dez” Nagle, guitar; Joaquin Ardiles, guitar; Morgan Sinclair, bass; and Alex Rüdinger, drums— are the first outfit to sign with executive chef Chris Santos, a man you may recognize from binge-watching the extremely popular Food Network show Chopped. Santos launched his new label, Blacklight Media, alongside Brian Slagel of Metal Blade Records after working with the esteemed company for many years.

“I think that when he heard Good Tiger, he felt it would be a great band to start his own label with and go from there,” Nagle surmises. “In other interviews he’s done before, he’s said that when he heard our band, it was like essentially hearing a band he would want to play in himself, and that’s what got him excited about us.”

However, the chef’s celebrity status wasn’t what initially fueled the making of their debut LP—it was the fans. The band launched itself off an Indiegogo campaign, with the hope of meeting an $18,000 goal. Not only did the band meet their goal within 24 hours, they had raised a total of $45,980 by the campaign’s end.“We were extremely surprised by that,” Nagle admits. “We had conversations before doing the crowdfunding. We realized that if it didn’t go well that it was not necessarily the end of the band before it began, but it definitely wouldn’t have given us a good start. When we came up with the number that we did, we still thought we were going to be asking for a lot and we didn’t know what to expect. And when we made the first $18,000 in the first 24 hours, we were all just taken aback.” The staggering sum shows that Good Tiger have all the right ingredients to make their endeavors work, from the belief and support of a loyal fanbase to that of a restauranteur/entrepreneurial metalhead.

Get your first taste of Good Tiger when they come stateside with Dance Gavin Dance, the Contortionist and Hail The Sun for the Mothership Tour this fall.