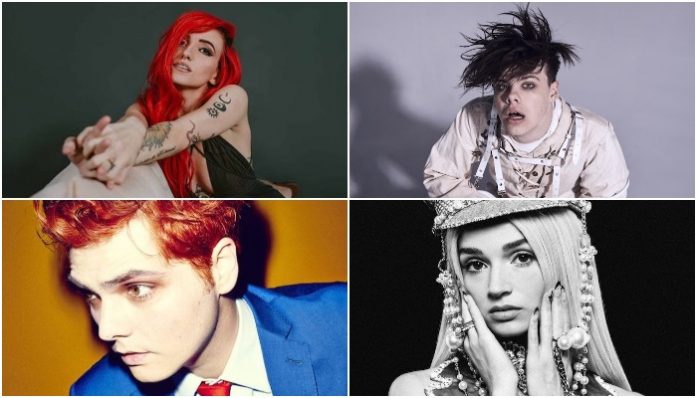 Music and comic books have always rendezvoused on the idea of examining flaws of a society and challenging ideals and archetypes through compelling storytelling and artistic expression.

From BABYMETAL to Gerard Way, a handful of comic-obsessed musicians are rendering their imagination into a visual narrative, reeling us into their creative world aside from music. Here are 10 graphic novels you need to check out by your favorite artists.

1. The Ghost Of Ohio

As a child I was terrified of many things. It was never specific or morbid but rather an overarching fear that SOMETHING was lurking around the corner or that the things I couldn’t control would manifest into something dark and evil and could hurt me. I developed defense mechanisms that were often compulsive tendencies meant to ward off the “ghost” in my mind. As I got older I strayed from those emotional responses and developed a sort of mask to wear with destructive behavior, drinking and surrounding myself with ways to distract from the “ghost” that I knew deep down I still feared. When I decided to make the change in my life to get back to who I truly wanted to be and in attempt to rediscover myself I found that those child like fears came rushing back and it inspired me to write the material for “The Shadow Side” record. In the 2 years since the release of that album I started thinking more about this fear and how I could utilize the reintroduction to an old friend of sorts in a way that would paint the picture of someone who feels these same emotions but is stuck in time. The titular character in this story is lonely and strange but hopeful and strong, a balance that I believe is present in so many of us. “The Ghost of Ohio” is both the name of my upcoming solo album and a comic book concept and today I am thrilled to share with you the cover of my first graphic novel drawn by Eryk Donovan. I can’t even begin to describe to you how excited I am to get to work with writer Scott Tuft and everyone at @z2comics to bring this story to life. I will share more about the comic, the record and everything that’s happening with “The Ghost of Ohio” very soon but for now you can head to the link in my bio to read more about the story and release information! Thank YOU for allowing me to have the opportunity to continue to follow my passion and dreams, I know how fortunate I am and without your support I wouldn’t be able to do any of this! 🆎🖤 #iamtheghost

While Andy Black’s second solo album focused on his experiences growing up in Southwest Ohio, the accompanying comic tells the tale of a ghost protagonist who backtracks his own mysterious death. Unraveling themes of love, death and retribution, the ghost journeys through various characters and attempts to fight his way back to life.

‪The secret is out!! Skin&Earth volume one will hit shelves July 4, all six issues collected into one book. ‬ ‪There will be interactive QR codes that tie in the music, plus guest art from amazing artists including @jimleeart inside!‬ ‪I’M STILL NOT OVER THIS ALL❤️‬ ‪#skinandearth‬

Lights’ Skin&Earth is a concept album based on her fantasy comic series of the same name. The narrative follows a girl seeking hope and venturing on a path of self-discovery in a post-apocalyptic world as she encounters love, cults, gods and mortals. Each track on the album corresponds to one of the six issues in the series. She also recently released Skin&Earth Acoustic, which featured songs that were recorded in natural locations from the comics.

3. The Twisted Tales Of The Ritalin Club

THE TWISTED TALES OF THE RITALIN CLUB my graphic novel is going to be released OCTOBER 15th! i can’t wait for you all to read this … pre order is available right now 🖤 https://t.co/NOwSYBBgAp pic.twitter.com/vCEKqcNFYr

YUNGBLUD’s upcoming graphic novel, The Twisted Tales Of The Ritalin Club, lures readers into his wicked dystopian fantasy. The plot centers on the pupils of Blackhearts Boarding School where YUNGBLUD runs the infamous Ritalin Club. Strict rules are enforced at the institution, and failure to comply results in execution. YUNGBLUD recently shared character sketches, and the graphic novel will be released Oct. 15.

Read more: Top 10 artists proving genres are a thing of the past from YUNGBLUD to Poppy

4. Genesis One: A Poppy Graphic Novel

I held my first Graphic Novel today.
Genesis😭💜😻
a dream come true
I am so excited for you to read it

“Is she a girl? Is she a machine? Is she humanity’s redemption or its damnation?”—these are the burning questions we’ve all had about the eccentric pop phenomenon Poppy. Following her 2017 parody of the Bible (The Gospel Of Poppy), Genesis One reveals her origins and the creation of her identity. The graphic novel is also accompanied by an ambient soundtrack, i c u (music to read to), for readers to listen to while reading.

"Find a way, or make one." #InternationalWomensDay #Orchid pic.twitter.com/2GioXwahP3

Written by Rage Against The Machine’s Tom Morello, Orchid explores the societal collapse of a future dystopian world from the eyes of Orchid, a 16-year-old prostitute. Morello introduces us to a crumbling post-apocalyptic society where the rich harvest on the poor, and the helpless are left to fend for themselves. Amid the mayhem, Orchid learns her self-worth and the horrors of political corruption.

To everyone that pre-ordered the @SeptmbrMourning graphic novel: We just received news that the tour pre-orders will get to us next Wednesday! We’ll sign and mail them to you… pic.twitter.com/mJk7fn8CVY

September Mourning started out as Emily Lazar and Marc Silvestri’s dark fantasy comic series of the same name. The plot focuses on a half-reaper, half-human, September Mourning, and her mystical adventures in a realm where reapers prey on the souls of the living. Focusing on Mourning’s inner conflict between good and evil, Lazar further expands the story arc and its themes with her hard-rock project.

It’s finally here – UA Hotel Oblivion #7 is online and in shops now! Worked hard on this one and looking forward to having it out there for you to check out, it’s a doozy. #umbrellaacademy #hoteloblivion #darkhorsecomics #variantcover

From the genius mind of Gerard Way, The Umbrella Academy first made its debut in 2007 with Apocalypse Suite, introducing the fascinating story of a dysfunctional superhero family. Over the years, the comic book series gained a cult following among fans and the MCRmy, leading to a Netflix adaptation in 2019. Last month, Dark Horse Comics announced a card game based on the series via a Kickstarter campaign launching early 2020.

Featuring all four members of Skillet, Eden follows John and Korey Cooper’s quest to save their family and town. Joined by bandmates Jen Ledger and Seth Morrison, the hard-rock quartet venture through desolate wastelands and the fallen cities of Tennessee in search of hope, redemption and answers. The graphic novel hits shelves Aug. 27.

9. Apocrypha: The Legend Of Babymetal

A graphic novel based on the themes of BABYMETAL, APOCRYPHA: THE LEGEND OF BABYMETAL will be published this Fall!https://t.co/yNhVVR7g5t#BABYMETAL #APOCRYPHA pic.twitter.com/m6b4Vklvtt

Apocrypha unveils the epic timeline of the BABYMETAL universe and their long-fought battle between the Vulture God. The premise is centered on the metal trio fighting the world’s antagonistic forces as descendants of the Fox God, traveling through different time periods to conquer evil and save the world.

Tom DeLonge’s obsession with aliens and the cosmos is made apparent with his adventurous enterprise in To The Stars Academy and the Sekret Machines series. Putting his conspiracy-ridden, galactic affinities aside, Strange Times: The Curse Of Superstition Mountain is a fun comic about kids documenting paranormal activities, with plenty of DeLonge’s classic profane humor and hilarity.