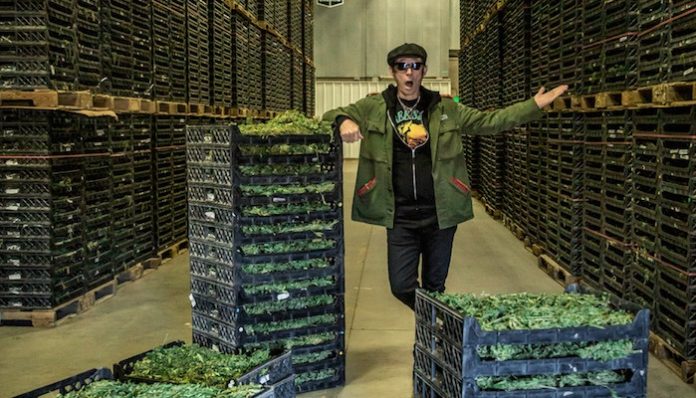 Mike Dirnt is best known for his role as the bassist of legendary punk act Green Day, but his days are about to get a whole lot more green with his new venture into the cannabis industry.

Dirnt’s role as an investor, adviser and brand ambassador for California cannabis farm Goldenseed stems from a dark time in his wife, Brittney’s, life, but their involvement sheds light on the positives of not only the company but the plant’s effectiveness as a medicinal option for cancer patients.

“I got involved with Goldenseed on an invitation to look at the farm with a friend of mine, and after having made a few trips to check out their beautiful locations, I asked my wife if she was OK with us investing,” Dirnt begins. “She was absolutely all for it because cannabis was a tremendous help during her chemotherapy treatments when she was battling breast cancer. To this day, it helps with her body aches and pains and the residual effects of a lot of drugs that went into her system.”

Dirnt’s journey into the cannabis world is a lengthy one that starts with his family and the differences he noticed between their personalities while consuming alcohol as opposed to smoking cannabis.

“Both of my parents and their friends smoked pot,” he says. “When they were drunk, they fought, but when they [smoked] cannabis, they laughed. That much was clear.”

For @MikeDirnt, investing in Goldenseed went beyond a love for the plant – it was also for the love of his family. Click to see what being involved with Goldenseed means to Mike. Link in bio.

More recently, though, Brittney Dirnt’s battle with breast cancer gave him a firsthand look at how cannabis can be used medicinally. Instead of using pharmaceutical medicines that introduce separate health issues, Brittney looked to cannabis. The bassist feels Goldenseed has cultivation processes worthy of assisting those with health conditions.

“I think people find themselves in a health situation where they’re looking for something, and they haven’t found what they need from big pharma or conventional medicines that are filled with bad side effects,” he opines. “Also, I believe if people are looking to cannabis as organic medicine, it should be grown the way nature intended.

“The way Goldenseed uses natural and sustainable farming practices speaks volumes about who we are as a company and the quality of what’s coming out,” he continues. “We didn’t win the High Times Northern California Preroll Cannabis Cup for nothing. The proof is in the plants, and the plants have spoken.”

The future of cannabis certainly has a lot of promise, with more than half of the states in the U.S. legalizing medicinal use of cannabis and a growing number achieving recreational legalization. Yet, there are still several issues to tackle. Dirnt says having access to cannabis remains a problem he wants to see improved.

Goldenseed, however, is setting itself apart from other cannabis farms by offering the public the opportunity to invest in their future. The company is the first private U.S. cannabis cultivator qualified by the U.S. Securities and Exchange Commission to sell stock to the general public and are offering entry at a low rate to prevent any gatekeeping of the industry. When thinking of why this is important, Dirnt recalls his youth and how an opportunity like this could have shaped him.

“I think if the 21-year-old Mike Dirnt—cooking at a seafood restaurant [and] living check to check—had the ability to invest $100 bucks in something and own something I believed in available to me, that would have been incredible,” he explains. “And now, people can do that. We had an investor the other day from Kenya. He can invest right alongside some kid in Iowa working at McDonald’s. It’s really cool. It’s the idea that we are all stronger together.”

Read more: Green Day seeking fan to host backyard gig ahead of ‘Father Of All…’

Dirnt has been contributing to Goldenseed since 2018. People interested in investing can join the action for just $100, and the company is currently selling up to $10 million of common stock at $10 per share.

“We’re thrilled that Mike is part of the Goldenseed community. It’s an exciting time for us and the industry overall,” Scott Goldie, CEO and founder of Goldenseed, says. “Our brand has developed a strong affinity among consumers while also assembling a diverse group of advisers over the last few years. Mike’s creative vision has already proven invaluable to our brand, and we look forward to continuing this work as we celebrate his role as a key member of our family.”

You can watch Dirnt and Brittney discuss their involvement with Goldenseed here or below.

Why did @mikedirnt invest in Goldenseed? Hear it from the man himself here.