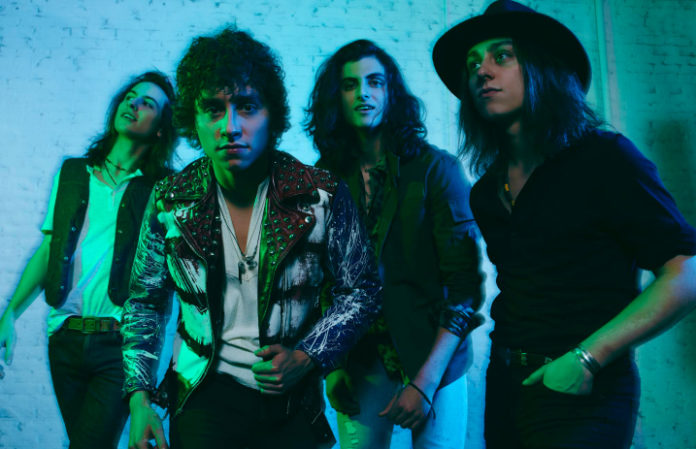 Greta Van Fleet is ready to take the rock music scene by storm. Setting out across the USA, the group took AP behind the scenes of the band’s first-ever tour while keeping a tour diary to document everything they’ve learned thus far.

SAM KISZKA: After the first show on the tour, at Austin’s in Libertyville, Illinois, we were packing up to leave. I remember looking around to make sure I had everything, and then we took off. It wasn’t until we arrived in Indianapolis that I realized I had forgotten one of my basses, and it wasn’t even mine. Marlon Young, Kid Rock’s guitarist and the co-producer of our EP, had lent it to me for the tour with the Struts. You can’t imagine how awful I felt, and I had no idea how I was going to make it right. When we got to the gig in Indianapolis, I walked in and there, propped up right in the middle of the floor, was Marlon’s bass with a note attached to it: “Free to a good home… my owner left me behind.” The Struts found it when they were packing up in Libertyville and brought it with them.

2. Be strategic as to where you park

JOSH KISZKA: One night, we parked our van and trailer in a Home Depot parking lot that was connected to our hotel’s parking lot. When we got up to leave the next day, someone had parked behind us, and then someone else had pulled in front of the van, perpendicular to us, literally an inch or two from the front of our van—we were totally blocked in. It took awhile, but we were able to get the guy parked behind us to move, and we were on our way.

SAM: I accidently knocked over a bottle of water onstage. I grabbed a towel that was nearby to clean everything up, but then I found out that the towel was one of the Struts’ and was meant for them when they came out to play their set. I felt terrible, so I ran out to a store nearby to replace it and get towels for us because we hadn’t brought any. During our set that night, I dumped a bottle of water over my head. When I went to grab a towel to clean it up, our towels had disappeared. Turned out the Struts had picked them up by accident.

JAKE KISZKA: We went to New York earlier this year to do a photo shoot, and the stylist brought this really beautiful wooden beaded bracelet that I got to wear. In the end, she let me keep it as a souvenir. It became my favorite bracelet, and I wore it every day after that. We were in a rush to check out of the hotel and get back on the road, and sad to say, I forgot it in my hotel room.

5. Bring more than one phone charger

DANNY WAGNER: I was the only one who brought a phone charger, so we were all sharing it. We took shifts charging our phones, and that meant that no one ever had a phone that was more than half charged.