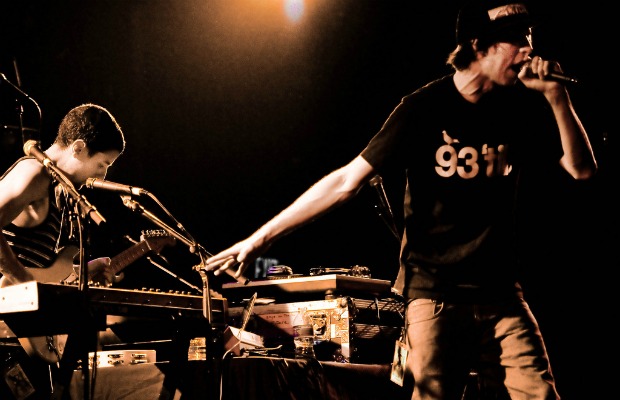 [Editor’s note: Grieves and Budo are currently on their first headlining tour. They’ll be checking in from the road periodically. Here’s the first installment. Check out all of their tour dates here!]

If you gave us one word to describe the first week and a half of the “Together/Apart” tour, that would be it. We left Seattle on the 16th of September bound for Canada. Van packed full of anticipation and a touch of nerves, we struck out for the first week of dates on our first-ever headlining run. We’ve spent the last three years slowly building our fan base, jumping on support tours with friends like Mr. Lif, the CunninLynguists and Atmosphere. Sure, we’ve played a show of our own here and there, but no more than a handful of dates have been truly, honestly ours. This is our time to test out the waters, dip our feet into the world of being headlining artists and see how many folks would come spend a night with us. And, thus—whoa!

From Calgary, Alberta, to Saskatoon, Saskatchewan, to Edmonton, Alberta, we had a week of shows that definitely exceeded my expectations. Thoroughly. And then there was Minneapolis. Our first ever sold-out show took place in Minneapolis at the legendary Seventh Street entry in October, 2010. We had just shy of 200 people there. Friday’s sold-out show at the beautiful Varsity Theatre capped at 750 folks. It was truly a beautiful and heartwarming thing to see the lights go up on that audience during our set, to truly engage with 750 folks that have welcomed us into their lives and into their city. It was indescribably awesome—and just a little cray-cray.

We’ve definitely experienced our share of weird shit in the past week, but thus is the altered and tilted reality of living with six other artists and touring folks in a van, traversing the world for a living. We bought a tin of Milk Fish in Calgary that looks like a prop from Where the Wild Things Are. Pretty sure it’s poison, but Wikipedia assures us it’s a commonly ingested form of sustenance in Indonesia. We’ve been cuddling with a life-sized stuffed bass fish named Gary Busey. Our friend and opener Prof and Budo absolutely destroyed a $500 orchid after using it as a sponge to numb the searing pain inflicted by an acute overdose of alcoholic whipped cream. And we’re pretty goddamn sure that someone roofied our sound guy in Edmonton. Canadians party differently than those of us South of the border.

All that aside, we’re beyond excited to see what the remainder of the Midwest has to offer. We’re just getting this thing started, and if the next few weeks are anything like the first, shit’s gonna be really, really good. Till next time, folks!