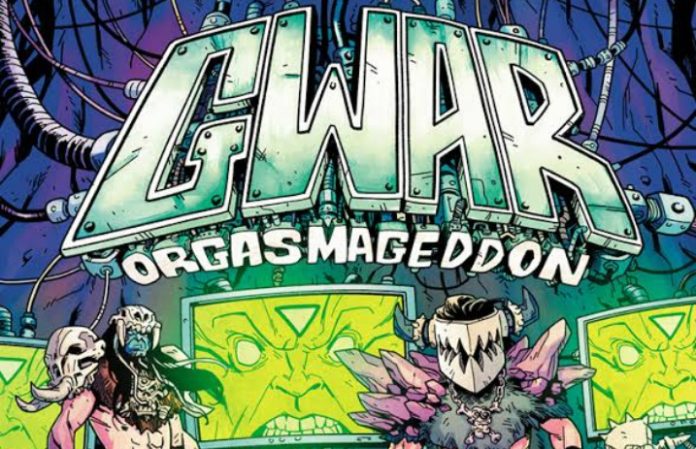 Everyone’s favorite armor-clad, heavy metal shock rockers, GWAR, are finally getting their own comic series! A Kickstarter page was launched today to help the band and comic creators make this crazy nightmare a reality.

Letterer Taylor Esposito (The Paybacks, Red Hood And The Outlaws)

Matt Miner (the man whose comics made the Westboro Baptist Church say he was going to “split hell wide open”) has stepped up to the plate, extending the mythos of the band into a four-issue full-color series where the band travels through time to shape the future. Just like their live shows, expect lots of blood, bodily fluids and laughs on every page.

“The fun thing about this story is that it's a ‘GWAR through time’ concept,” Miner explains, “so we have a lot more creative freedom—think of it like Bill & Ted's Excellent Adventure, if Bill and Ted were alien monsters who went on a bender and killed everything in their way while they made a bunch of fart jokes.”

Although the $39,000 goal may seem like a hefty number at first, a pie chart breaks down the expenses of labor and the rewards packages to entice funders. The rewards range from the four (hopefully five, with the stretch goal) issues of the comic all the way to signed posters that include the autograph of GWAR’s late, great Dave Brockie (Oderus Urungus), and even a signed stage prop of “Mitt Romney’s freakin’ head.”

“All those people have to pay their bills, put gas in the car and feed their cats while still making the book, so the issues get expensive,” Matt Miner explains. “Each one costs roughly $7,000 to create, then the rest of the Kickstarter goal is shipping, printing of shirts and comics, and Kickstarter's cut.”

The words truly come to life with the artwork and layouts by artist Jonathan Brandon Sawyer, with pages filled to the brim with detailed characters and elaborate massacre scenes.

“The first priority is to make sure the story is coming through clearly to the reader,” says Sawyer. “I focus on putting those characters and actions at the forefront. A lot of credit also goes to our colorist Marissa Louise for taking my dense, chaotic pages and making sense of them.”

Like every comic, the working relationship between writer and artist is sacred. “Matt usually gives me full script, but it is a collaboration, so I do have freedom to interpret things differently to an extent. Sometimes I can do something totally different than what he asked for and he loves it, and sometimes he gets hung up on a sign in the background being different than what's in the script,” Sawyer explains with a laugh.

The good news is, Kickstarter doesn’t take your money until the end of the campaign, and only if the goal is reached will it come out of your wallet. The bad news is, the evil Sawborg Destructo will murder Matt Miner and Jonathan Brandon Sawyer if the goal isn’t met. They’re not too happy about that part.

The members of GWAR wrote to Alternative Press:

Beefcake The Mighty: I've heard GWAR has a Kickstarter comic being made. This will be a fantastic way for our literate fans to give us more money for crack. Our comic will be tailor-made by fine craftsmen on a new material called “paper.” No more of those pesky touch screens! The comic will, however, require some knowledge of the “English” language, despite the fact that it will be written primarily by Americans. Unfortunately, readers of our new GWAR comic will be required to “turn the pages” to further the storyline, but we currently have our people working to fix this bug.

Sawborg Destructo: I will destroy all involved in the making of this Kickstarter comic! If you're reading this, you're already dead!

Although his death may be closer than he thinks, Matt Miner ended on a positive note. “You really don't need to love heavy metal music or being sprayed with fake blood and other bodily fluids to love this book—just have a healthy sense of humor.”