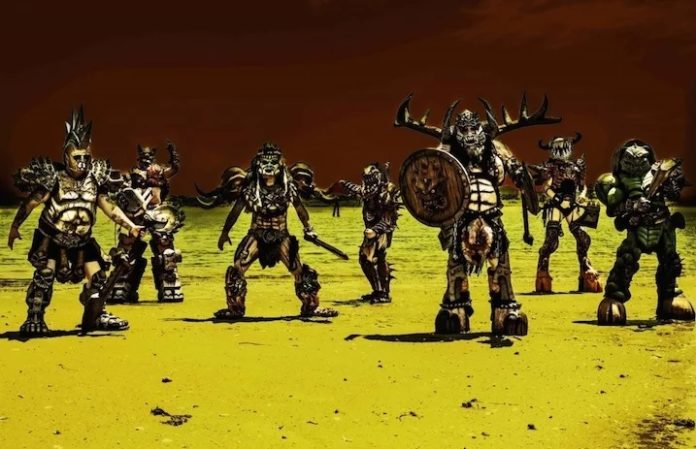 Those Scumdogs of the universe, GWAR, are set to inflict their latest album, The Blood of Gods, this Friday (Oct. 20). This is their first new recording in four years, as well as their first record without vocalist Oderus Urungus (Dave Brockie, who held the role of Oderus since GWAR’s inception, died in 2014). Pustulus Maximus, GWAR guitarist and one-man disease epidemic, took a break from tour preparation to talk about the new record, what really gets his goat and outlandish demands from the band.

What was your most important goal in mind when you were planning out the new record?
The most important thing in creating this piece was trying to do something original, something that wasn’t imitating something we’ve previously done. In that respect, I think we achieved that goal.

“GWAR is not bound by the ‘moral standards’ that humankind has been stuck with.”

Did you have any specific targets in mind for your brutality on this record?
We had to figure out what was relevant to the band and what was going on in today’s society, as GWAR has always been a bit of a political satire. Quite frankly, the hardest part was coming up with something that people will remember.

Given that GWAR have always set your sights on public figures, are you surprised at how thin-skinned people have become?
Very much. You say one thing and everyone loses their minds and chastise you non-stop.  But we don’t pay attention to that. GWAR is not bound by the “moral standards” that humankind has been stuck with.

Do you have any personal triumphant moments on the new record?
I think the biggest triumph of the record is that we created something unique to what we are now. The biggest challenge and the elephant in the room of course was that we had to do this record without Oderus. In doing so, we didn’t want to make something that sounded like we were imitating him. As much of a creative force as he was in the band, GWAR has always been an assembly of many moving parts. I think we found our voice successfully. In the same breath, we didn’t set out to sound like anything specific; we just wanted to do what came naturally. As far as the last record, Battle Maximus, we kind of did a record that followed the same vein of what the band had done over the previous nine years. This time, Beefcake and I, and even Blothar (new vocalist), managed to put our own style into this record. And of course, the mainstays – Jizmak Da Gusha and Balsac – helped us keep that original GWAR sound throughout all of the material.

“I think the biggest triumph of the record is that we created something unique to what we are now.”

Going back briefly to GWAR’s back catalogue, are you surprised that classics like “The Morality Squad” and “Slaughterama” would actually re-emerge as relevant social commentary for current events?
We definitely knew this would happen. It seems like Americans, in particular, don’t learn from their past mistakes. There’s not that many young people that can remember the Reagan era and what we went through, what was going on in the world – trickle-down economics, the war on drugs, Iran-Contra – and what was going on in the music industry. What we and other bands like Judas Priest fought for was freedom of expression. All of those things are under attack again, but people are treating it like this is something new. This really just a repetition of what happened then. Donald Trump may not be Ronald Reagan, but he definitely has a lot of the same idiotic platforms. He’s aligned with the rich. This is his goal: make money and screw everyone else at the bottom. At the same time, it’s going to directly affect artists and free expression.

You’re getting ready for an extensive tour throughout the US. How do you keep the live shows fresh?
I know you said “extensive,” but in my mind I heard “expensive.” [Laughs.] We basically spend every bit of money we possibly have on the show: solid gold guitars, platinum microphones, caviar dishes. But we do everything we can to remain fresh. We desperately try to avoid becoming a legacy act. That’s the beauty of the GWAR show: It’s more than just a rock band. If we put on the same show, it’s just going to be boring. I don’t think the the rock world needs touring rock troupes that are basically the touring version of a Broadway show like Cats. You see Cats once, and then that’s it, you don’t need to see it again. But people on Broadway are morbid: They like to drag their friends to the shows multiple times. GWAR wants to torture people on its own time, not have people drag their friends to see some geriatric fools dancing onstage.

Read more: 11 reasons you have to see GWAR live

What’s the most absurd thing you’ve placed on the tour rider that you actually got from a venue?
One time I put Glenn Danzig on the rider, and they actually brought him to me. I didn’t know what to do. I shook his hand, thanked him for his time and said, “See you later.” He left very confused.

Finally, it seems that even the sharpened scythe of Death cannot stop GWAR. Is there any force in the universe that can?
Well, heroin can stop us dead in our tracks. We have one more weakness: bullets.  Everything else: cocaine, car accidents, nukes, we can survive all of that stuff.  Bear attacks?  Totally fine.

How about STDs?
I’ve got almost all of them. I’ve been treating them like Pokemon: Gotta catch them all.

“GWAR wants to torture people on its own time, not have people drag their friends to see some geriatric fools dancing onstage.”

The Blood Of Gods releases Oct. 20, but you can pre-order it (and view their tour dates!) right here.

WATCH MORE: GWAR vs MISS MAY I at the 2017 APMAs — a throwdown for the ages