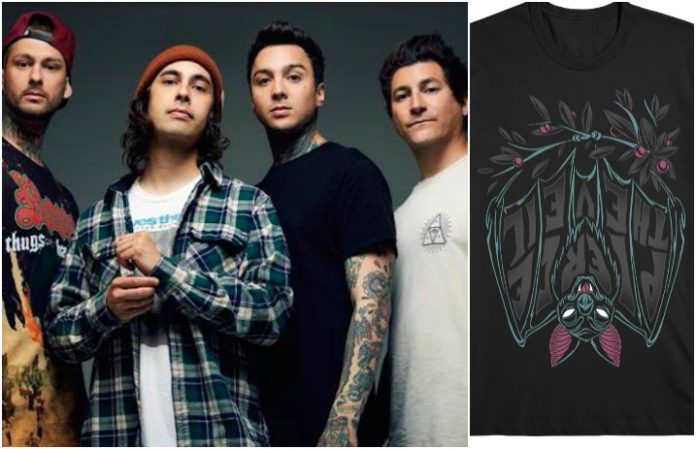 Let your love of band merch and Halloween combine by picking up some rad Halloween merch from a few of your favorite bands! Some of these are only available for a limited time, so be sure to grab them before they're gone. There's a few that even come with their very own artist-inspired stencil kits, so you can show off your mad pumpkin carving skills as well as your devotion to your favorite bands.

Read more: Starbucks is releasing a vampire Frappuccino for Halloween

Snag this burning pentagram shirt from Rockabilia for $20.99 and you'll also get a badass Slayer stencil to carve into your pumpkin!

A Rob Zombie scarecrow in a pumpkin patch is the perfect way to get spooky this season. Rockabilia will also toss in a Rob Zombie pumpkin carving stencil with the shirt which sells for $20.99.

Show off your love for Pierce The Veil AND Halloween with this limited edition PTV hanging bat shirt. Snag this bad boy from their merch store for only $20!

Five Finger Death Punch give the GY6 logo a spooky twist with their Halloween shirt. Get a FFDP pumpkin carving stencil and the shirt from Rockabilia for $19.99.

Halloween meets Helloween with Rockabilia's Ghost shirt! Pick up this shirt and it's complimentary pumpkin carving stencil for $20.99.

Take your pumpkin to the circle pit with these rad Moral Support Halloween shirts! Pick one up from one of their shows for $15, or hit them up on Facebook to snag yours!

What's Halloween without a severed head? A shirt of Alice Cooper holding the severed head of…. Alice Cooper… can be yours for $25! Free pumpkin carving stencil also included.

Guns N' Roses are offering not one, but TWO Halloween shirts for you to rock this year! Snag one or both for $30 each from their merch store.

Hopefully you were able to grab one of these limited edition Panic! At The Disco Halloween shirts. They were only around for a mere 48 hours, but we're keeping our fingers crossed for another quick comeback.

Another 48 hour goody we hope you were able to get your hands on. What do you think our chances are of convincing Real Friends to bring it back?

What Halloween merch have you picked up from your favorite bands? Let us know in the comments below!