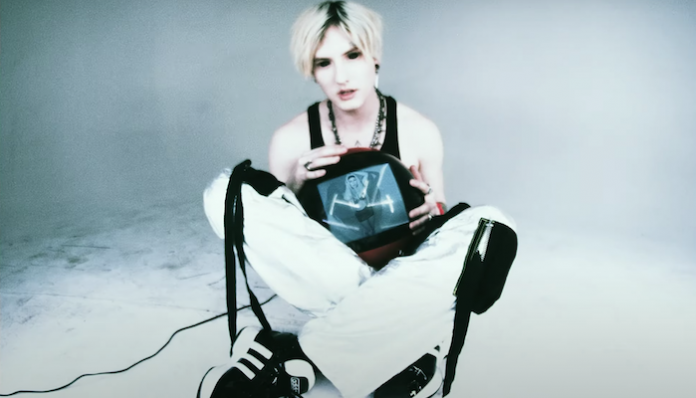 Cameron Cade, aka Halo Boy, is naturally in his element when he’s writing, recording, producing or on a music video set. Inspired by the various genres he grew up listening to, including pop and the electro–industrial sounds of Nine Inch Nails, Halo Boy defies genre boundaries in his creations.

In his debut music video for “Fame,” Halo Boy leans into stark ‘90s industrial visuals and strobe-like effects to create a sense of isolation. A modern-day take on Good Charlotte’s “Lifestyles Of The Rich & Famous,” Halo Boy’s “Fame” explores the separation between reality and fame. Directed by Erik Rojas (Waterparks, Chase Atlantic, Herizen), the visuals effortlessly capture that essence and culture that Halo Boy envisioned when he originally wrote “Fame.”

Living in L.A. with his partner, Halo Boy is an outsider, and in his own words, an alien. While others are concerned with clout and checking their appearances on their phone’s camera, Halo Boy sees beyond that and creates outside of that world. Feeling detached from that culture, “Fame” is his honest take on that environment and the pressure to change to fit in.

Read more: DE’WAYNE gives a glimpse into his past in the explosive “Walking To Work”

You can watch Halo Boy’s video for “Fame” below and read a full interview with him on the creation and inspiration behind the song and video.

“Fame” marks your debut full-production video. What was the inspiration behind the creation, the visuals and the overall aesthetic?

I was trying to find a way to, in a simple artistic way, symbolize feeling isolated in an environment where there’s a lot of parties [in L.A.], all of this clout culture going on, and people are so concerned about how they look. They are always checking themselves [out] on their phone and seeing who’s got the most followers and all that stuff. Being in the middle of that, I’ve always felt super detached and just in this separate void.

So visually, we were talking to Josh [Madden] and Erik [Rojas] back and forth about a concept that I had originally come up with that got slightly altered and improved. But it was like, “How do I show you that I’m like an alien that’s out of place?” And then there’s a girl or a group of people around me that are just so concerned with themselves, and at the same time, I’m observing that and then trying to figure out how I can fit in and what I need to change about myself to fit in. I feel like that is a very real but mentally unhealthy thing that a lot of people go through nowadays.

So a lot of the inspiration came from how to visually portray isolation and being a void in the middle of that. Josh referenced the “Scream” video by Michael Jackson and Janet Jackson where they’re in that all-white spaceship. I grew up listening to Marilyn Manson and Nine Inch Nails and stuff, too, so there’s a bit of that inspiration.

It’s interesting that you created a video that depicts isolation, but throughout the video, you seem very in your element. How did you make yourself feel comfortable while on set?

I feel like I’ve been in the character of Halo Boy for so long and felt that way for so long that if I’m onstage or if I’m on a music video set or in the recording booth, that’s the only time I do feel very comfortable in myself. I can be honest and move and speak and sing in a way that’s me. Then obviously the other aspects of going to meet somebody or to a party or just out in public, that’s when I feel very out of my element.

You mentioned that the video was shot by Erik Rojas. What was that experience like working with him?

Erik was an amazing director. It was my first time working with him, but I definitely want to do more. He was really great at understanding what the vision was and being able to take that and then elevate it even further. He was really great with directives and keeping the train moving the whole time because it was like an eight-hour shoot. And we got a lot of shots and a lot done within that eight hours. A lot of it was thanks to Erik [for] keeping everything going and keeping everybody positive. He works in a similar way that I do with the way that I make music. There was an initial plan, but then once you get into it, you just roll with whatever happens, and then you don’t fight the creativity. Usually, you come up with an even better thing than you imagine.

So on this video, you wrote the song and then created the video recently with Erik. Did the idea for the visual come to you while you were writing the song, or was the song something that you sat with for a while and then you came up with the visual at a later point?

It was pretty much right away while I was making the song. I initially had a visual in my head while writing the song. It was me sitting in an all-white bedroom at the edge of a bed, and there was a party happening around me. And then I was in a separate bedroom sitting by myself having social anxiety. That was the mental image while I was singing. Then the white bedroom turned into the white soundstage, and the bed turned into the eight chairs. [It] evolved into something even cooler, but it was pretty close.