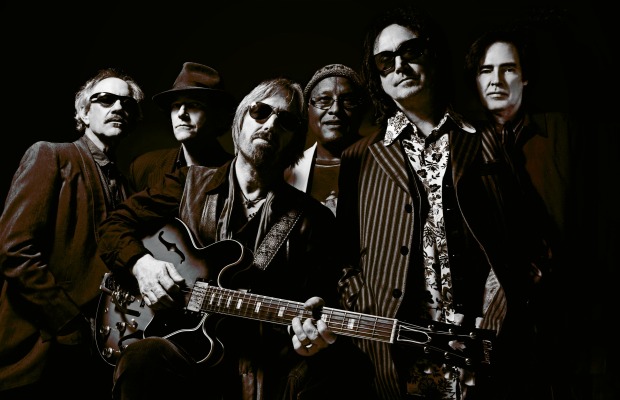 On October 20, Thomas Earl Petty turns 61 years old. The classic rocker better known as Tom Petty (pictured above holding a guitar) has penned some of the most enduring songs of the last 35 years—including “American Girl,” “Free Fallin’,” “I Won’t Back Down” and “Refugee”—which has made him one of the most popular, beloved artists ever. In the spirit of celebrating his birthday, we asked some of his biggest fans—including Jack’s Mannequin’s Andrew McMahon, Tegan and Sara’s Tegan Quin and members of bands including A Rocket To The Moon, Hawthorne Heights and the Summer Set—to talk about what Petty means to them. Here’s what they said.

Andrew McMahon of Jack’s Mannequin
What does Tom Petty mean to you?  Why is his music important to you?
Tom Petty, there’s a level of balance to his art that doesn’t really exist in a lot of rock ’n’ roll.  It’s not pretentious, but it’s really truly, rock ’n’ roll.  It doesn’t stick its nose up at everyone else, and he’s honest; you can tell there’s an honesty there. There’s a thing in rock ’n’ roll where there’s a lot of bravado and machismo and big swinging dicks trying to prove themselves. What Petty does, is he’s not afraid to write beautiful things, but he knows how to make them sound like rock ’n’ roll. I just don’t know that there are a lot of bands that do that well without feeling the need to insert some additional level of toughness or something.

And he’s fucking honest. He’s honest, he’s real, he fights for what he believes in. On the business side, I admire his willingness and his ability to stand up to his record company when he felt like his fans were getting screwed.  I think there’s sort of a back world for all of us on major record labels—you know, every day you have to find a way to make this art and commerce thing more about art than commerce.  And I think that Petty did it better than anybody.

He’s one of these fearless artists, and there aren’t a lot of those out there.  A lot of people—and you see it happen with indie bands that get signed to big record contracts—you see people acquiesce to the powers that be and the things that surround and the influences that are out there, that are really dedicated more toward steering you towards some quick stardom, rather than putting you on a long road towards a career. There aren’t a lot of people who get how to do that.  That’s something I’ve tried to do throughout my whole career and largely looking at a guy like Tom Petty and looking at a band like the Heartbreakers, you realize they managed to navigate a lot of troubled waters without ever giving in to what surrounded them. I think that’s a lesson a lot of these young bands need to learn.

Stephen Gomez of the Summer Set
What is your favorite Tom Petty song?
“Here Comes My Girl”

What do you like about Tom Petty's music? Why does his music mean something to you?
I love the character of his voice.

What is it about Tom Petty's music that's kept him an enduring, beloved figure?
I think what he writes is very relatable. He’s able to capture the human condition with such simple, yet poetic, words.

JT Woodruff of Hawthorne Heights
What is your favorite Tom Petty song?
To be honest with you, it's really tough to choose a favorite song from one of my favorite songwriters.  I've always been more of a full-album listener, because I love to be inside an artist's full piece of work…but if I had to choose one song, it would probably be “Even The Losers.” The lyrics are so punk rock, and the chord structure is so simple and in-your-face. It makes me think of my summers as a young adult.

What do you like about Tom Petty's music?
He doesn't hide behind anything complex and false; he just uses a few chords as a vehicle to tell you a story. As a songwriter myself, I love how he doesn't compromise his art. If he has a certain theme in mind, he will do whatever it takes to bring you into his head. I think that each of his albums are an entirely different timepiece for him, and I love that. I love how he can go from pissed off and aggressive, to completely vulnerable, all within an album. He shows you that you don't need to shred the guitar, because if you come up with a story and great melody, you will have a great song.

Why does his music mean something to you?
Tom Petty's music means something to me, because of the honesty behind it. He doesn't pull any punches. He told his record label that he wasn't a bag of apples in a grocery store, and they couldn't sell him that way. He stood up to the Man, and the Man backed down. I will respect him forever for that, because he wasn't going to let his art be compromised. These days, everyone is so afraid, [but] Tom Petty wouldn't stand for that.  He not only has my respect as a songwriter, but as pioneer for musician's rights.  He wanted to write good songs, and make sure his fans got them at a good price.  You can get any more simple and honest than that.  I own every single album, and they are all great.

Jared Monaco of the Maine
What is your favorite Tom Petty song?
There are so many gems, but if I had to pick, I would probably say “Walls.” On our tour with Augustana, they brought every band on stage during their set to cover it. Sometimes, memories of a song can be more powerful than the song itself.

What do you like about Tom Petty's music? Why does his music mean something to you?
Tom Petty can write lyrics that are both broad and specific at the same time. He's great at conveying attitude inside of his melodies. I truly believe he has written a song for everyone, whether it's a no-brainer like “American Girl,” or a lesser-known tune like “Girl On LSD.” Either way, the songs are honest, the musicianship is incredible, and the message is clear.

What is it about Tom Petty's music that's kept him an enduring, beloved figure?
It always comes down to the songs. But sometimes, you have to fight for those songs. How many artists these days can say they did what they wanted to, when they wanted to? Tom Petty only answers to Tom Petty. He writes consistently great music and is great to his fans. That's so important, because if your number one priority isn't your fans, they are going to see right through your bullshit. When the live anthology was released, I locked myself in my room and listened to it in its entirety. I'm sure there were people doing the same thing all over the place. It's the real deal.