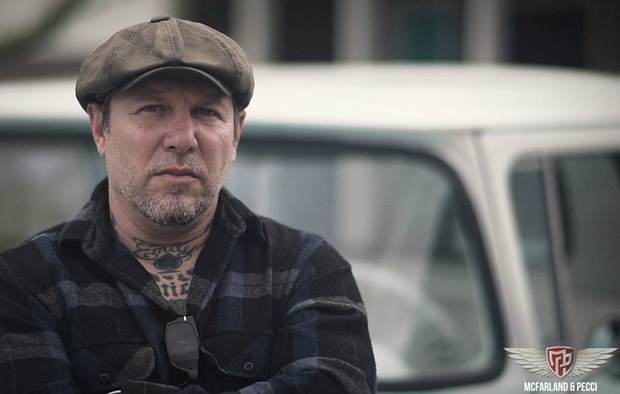 While New York City’s brand of punk rock was built in the late ‘70s on scummy, sexy, cool, its story didn’t stop when the marquee names became famous and outgrew CBGB. The Velvet Underground, Ramones, Talking Heads and Blondie are the stars on the pre-distressed T-shirts lining the racks at department stores, but the voice that carried on was formed not by transients or art school kids but by the city’s next wave of native misfits, searching for a scene.

That wave was hardcore punk and it was formed out of necessity: a community whose influence had more impact culturally, but translated to less profit commercially. Tony Rettman’s recently released oral history NYHC: New York Hardcore 1980-1990 condenses the urban legends, folklore, and color into a 384-page compendium of a story that’s still being written. The Stimulators, the Mad, Kraut, Even Worse, and the world’s most storied hardcore transplants Bad Brains formed a sound that reeked of yesterday’s trash juice, eventually sped up to a tempo that made the glue-sniffing Ramones seem tame.

NYHC became known for its raw power—and the danger and violence that followed it—but decades later, there’s more clarity to what started on the Bowery and subsequently spread across the boroughs and eventually to the entire world. The old rock adage says the Velvet Underground inspired their crowds to form bands. Hardcore inspired their audience to start worlds. The Cro-Mags and Agnostic Front were some of the city’s first native bands to not only define hardcore, but to take it global. Three and a half decades later, their most recognizable members, a Italian American who grew up on Mott Street and his Cuban-born friend who claimed anywhere on the then-barren Lower East Side as home, are two of the most recognizable icons and ambassadors for hardcore.

Now in their 50s and 60s, AF members Roger Miret and Vinnie Stigma’s stories are being told by director Ian McFarland. McFarland’s production company recently launched a Kickstarter campaign for the film, titled The Godfathers Of Hardcore. Having played in Boston hardcore band Blood For Blood for years before directing several music videos and documentaries, McFarland is a storyteller who sees the weight of this project and deeper narrative. Of course he’s a fan and student of AF, but he’s also a personal friend.

Hardcore’s merit has never been measured in ticket or album sales, but in impact. It’s birthed more than musicians: Filmmakers, authors, visual artists, actors, and other creative types have all been inspired by that first seductive chord that screams, “Do it!” Anthony Pappalardo spoke to McFarland about the challenge of capturing the duo’s legacy, impact and unmistakable personalities in his film, The Godfathers Of Hardcore.

The Godfathers of Hardcore – Kickstarter Director's Statement Video from McFarland & Pecci on Vimeo.

What inspired you to take on making a documentary about Agnostic Front?
IAN McFARLAND: It’s a project that Roger, Vinnie and I have been talking about for many years. We first talked about it roughly 10 years ago, when crowd-funding wasn’t really prominent. I was a lot younger in my career and hadn’t done the caliber of work that I have over the past few years. I knew back then that this film needed to be done really well and I did not feel that I had the experience to do it justice. Putting together a film about a band that has meant so much to so many people over the years is tough, and on top of that, it’s not just a film about a band—it’s a story about people’s personal lives, which makes it even more difficult.

When I decided I really wanted to do this film, I sat down with Roger and Vinnie and said that I wanted to do a different type of film, one that no one else could do with them. I didn’t want to do just a “band history” film, because anyone could do that. I wanted to do a film about the two guys that I know: the ones I call friends, that I hang with, party with, and have toured with. I want people to know those guys, because they’re really interesting characters with an amazing story of survival. I guess they didn’t really expect that, but after a few minutes they were like, “Wow, no one’s really approached us to do something like this. With other filmmakers, it’s always only been about the band.”

To me, what’s really unique about this band is the relationship between Roger and Vinnie and the bond that they have had over 35 years. They’re these two guys who have an amazing chemistry and it’s really interesting to watch; they couldn’t be more different, but for some reason, they just click. It’s not something that you can talk about or write on paper—you have to just see it to understand it.

As much as it’s a story about these two charismatic individuals, it’s also a story about New York City at a very different time in history.
Absolutely. In the 1980s, New York’s Lower East Side was a very different and dangerous place than it is today. Roger and his friends in that early 1980s scene were living in the thick of it. Some of the stories that Roger has told me literally sound like scenes from Mad Max. I mean, some of the situations these guys lived through should have movies written about them on their own. Every time I sit down with Roger and we do an interview, he tells me something new that just blows my mind.

Roger and Vinnie, they’re two of the pioneers of NYC hardcore; there were no “how to” books on how to be in a hardcore band back then. I mean, they were truly writing that book as they went. Imagine if Agnostic Front had not done what they did? What would the punk and hardcore scene look like today? I don’t think they could have possibly predicted what they started back then would turn into what it has today, but because of their dedication and perseverance, we are sitting here having this conversation about this movie I’m making. I think that we really need to pay homage and respect the fact that they not only lit the NYHC fire back then, but they’re still carrying the torch today. One of the reasons why this film is called The Godfathers Of Hardcore is because they’re not only out there still doing it, but they’re doing it really well. Most people playing hardcore burn out in their 20s, maybe 30s or 40s if they’re lucky: 50 and 60 and still doing it and staying relevant? Holy shit, that’s just remarkable. And it’s not like they’re living a luxurious life on the road—they’re still trudging around like 18-year-old kids slugging it out in a van a lot of the time! That’s just awesome.

What have you found out so far and how has the process of making the documentary been?
I’ve known Roger and Vinnie for close to 20 years and during this filming process I am constantly finding out new things about the band, as well as each of them personally. That’s one of the things that truly gets me excited every day filming this movie. I think that me making this film is something that’s really important to them both. We have a high level of trust between all of us. Every time I turn the camera on and press “record,” I know I’m going to get the same answers from them, as when the camera’s off. That’s how I know that this is something special. For some reason we all really click: They’re not posturing at all when my camera is out. What you see is what you get.

How far back you’ll be going in their personal lives?
I already spent a day with Roger and his mother in Florida, which was something really cool to film. And we’ve gotten access to home movies of him when he was a child. We also just got footage of Vinnie in 1956 as a really young kid. It’s pretty remarkable footage and is going to add a very unique element to this film.

Why is this documentary important to you and what do you hope people get from seeing it?
That’s a really good question and a really hard one to answer. There are a lot different reasons, but the main reason why this documentary is important is because I think they’re a big part of music history. They’ve had a huge impact on so many people’s lives, [as well as an impact on] a culture and music. It’s a story that just needs to be told. It’s really important for people to know not only their immediate impact on the hardcore/metal and punk scenes, but also the ripple effect in the mainstream they have had and what that has done to music today. I mean, they’ve influenced people like Phil Anselmo, Jesse James of Monster Garage, artist Matthew Barney, Kirk Hammett and Moby, just to name a few. Those people have had one hell of an impact on today’s culture.

Once you start looking at it that way, you can see the impact that they have had on the bigger picture. We need to do a film on them now, because they’re here. They’re still touring and playing regularly and if we don't, we're all gonna regret it. We can still witness them doing this, and it's awesome to watch them do it with the same passion now as they did 35 years ago. My goal with this film is to make something very special that fans of Agnostic Front will love, but also a film that people that don’t even listen to hardcore will be into, as well. Alt