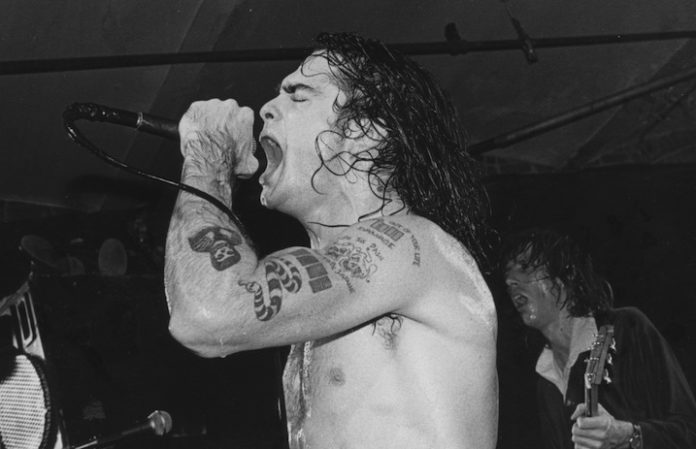 The book is described as “a portrait of music in motion—told through reprinted fanzine pages, hundreds of largely unseen photographs and over 100 then-and-now interviews from key movers including Ian MacKaye, Keith Morris and Milo Aukerman.”

Read more: Watch the trailer for film documenting the rise, fall and rebirth of the music industry

The project was nearly four years in the making between Gitter and Bridge Nine Records owner, Chris Wrenn.

The Necros were early American hardcore’s ambassadors to the the Midwest, hooking up gigs for the likes of Black Flag, DOA and the Misfits. They also were a feral force unto themselves as seen here at The Club in Cambridge in August 1983.

Milo’s back from college at The Living Room in Providence, Rhode Island in 1985. Who would have anticipated the pop-punk revolution that they would light the fuse for?

Henry Rollins and Greg Ginn, circa 1985. All muscle and mental at The Channel in Boston.

Metallica: Summer 1983 at the Rat in Boston. Cliff Burton: humble, hungry and ready to take on the world. The world never knew what hit it!

Ian MacKaye screaming at more than a wall. June 1983 at The Channel, Boston, Massachusetts.

Al Barile powers up a mighty riff for the Boston ‘Kids to Have Their Say’ in 1983 at The Channel, Boston, Massachusetts.

H.R. from the Bad Brains at The Living Room in Providence, Rhode Island, 1986. “I Against I” was just out and no one needed to find Joseph I. He was front and center, backflips ‘n’ all.

Mike Dean takes a shot against conformity, technocracy and the hegemony in 1985.