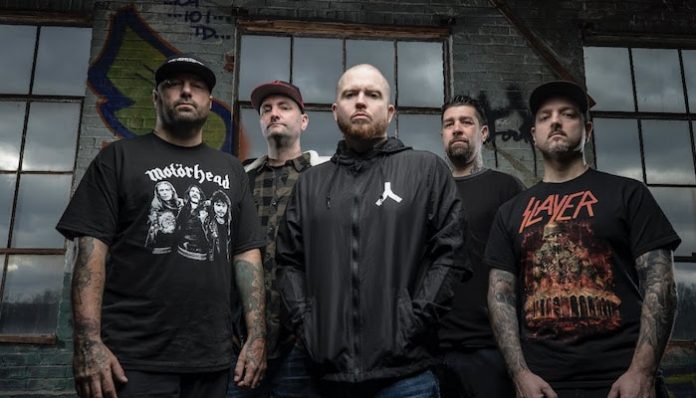 Four years on from releasing their seventh album, The Concrete Confessional, Hatebreed were supposed to be returning this year with their follow-up. That all changed when the coronavirus pandemic turned the world upside down.

They postponed their touring plans with Parkway Drive. They delayed their new record due to an inability to get physical copies pressed. Still, Hatebreed have a new record, Weight Of The False Self, which they released Nov. 27. And now they’re back back into the swing of crafting inspiring and empowering hardcore to push people to make the best of their situations.

Read more: You’ll be able to stream every 2021 Warner Bros. film, but there’s a catch

The album’s hopeful themes are all too fitting for the year everyone has experienced, even though the group didn’t write it during the pandemic. Hatebreed vocalist Jamey Jasta has spent the past few years getting himself out of a writing block that initially made creating their upcoming record difficult. Nevertheless, Jasta and co. showed perseverance. They powered through to create something motivational for one of the band’s best efforts in years.

“My biggest fear in between albums is [wondering], ‘When is the music going to leave me? When am I going to stop having ideas and getting that charge from a great riff or a great idea for a lyric?” he says. “About a year-and-a-half, two years into touring on Concrete Confessional, I really just started hitting this wall. When I got home, I was looking through all of my hard drives, but it was a lot of stuff that just didn’t sound like Hatebreed to me.”

Read more: Here’s how you can own these signed Weezer and Fall Out Boy guitars

In the time between outputs, the Hatebreed frontman worked on two solo records and produced Twisted Sister legend Dee Snider’s 2018 solo album, For The Love Of Metal. Everything he was working on felt too melodically inclined for what he wanted a Hatebreed record to sound like, though.

“I thought, ‘It’ll come. I can’t worry about it,’” Jasta says. “Then I would hit a wall again. But then I started producing the Dee Snider record. I was productive, [and] there was a lot of touring. I did The Lost Chapters, [the] Dee Snider album and did Jasta’s The Lost Chapters, Vol. 2. So, as far as writing, I got all of the melody and all of the different ideas out of my system, off the hard drives and distilled down what I had for hard riffs and hard lyrics.”

Over time, though, riffs and lyrics started coming together. And all of the band members started compiling what they had into a handful of strong tracks. As soon as the ball started rolling, they snapped right back into what they do best and crafted an incredibly well-composed album built for Hatebreed die-hards.

“Once we had four or five really strong songs, the rest just flowed, and that’s when that floodgate opened,” Jasta says. “Chris [Beattie, bass] had sent a bunch of great ideas, and when Matt [Byrne, drums] came in to do the preproduction, it was just like, ‘All right, we know what to do. Play to our strengths, have some big singalongs, some big anthems, but let’s also have some really heavy stuff, some really fast stuff, a lot of drum-heavy and guitar-heavy stuff. I’m really happy with it.”

Prior to the album and tour delays, they offered a snippet of new material with “When The Blade Drops.” The song’s speedy brutality is a definitive show of Hatebreed’s best bits. And while it showcases Hatebreed’s sound on their new record, they instead dropped it as a standalone single. With the album needing artwork and final masters completed before revealing a lead single due to streaming constraints, they decided that having something fresh was a better choice heading into this year.

“I thought, ‘Why not?’ because then we have new music out,” he explains. “It can hold fans over until the tour, and we can get the first single out for the middle of March or late March, and it seemed like the right thing to do. With Nuclear Blast doing this for Machine Head and other bands, we felt it would keep the name of the band out there.”

Read more: Is there an All Time Low, Demi Lovato and blackbear collab on the way?

Hatebreed also celebrated their 25th-anniversary last year by touring with bands they’ve been influenced by over the years, including Obituary, Cro-Mags, Madball and more. With that much time fronting the band, Jasta has seen countless ups and downs. But ultimately, he’s wants to continue sharing positive messages with listeners just like the bands he grew up with.

“I’ve been trying to have this more glass-half-full mentality, and I’ve always tried to have some of that on every record,” he says. “Some optimism on every record because what’s the alternative? Just complete hopelessness and depression and nihilism? That’s not a message I want to send. Other bands can do that. That’s fine if that’s how they feel, and if that’s the decision of what they want to push, that’s fine. It’s just not my thing.”

Jasta hopes Hatebreed fans today can take something that’s “just a little bit more than entertainment” from their music. They’ve been promoting staying positive to overcome hardships all throughout their career. And Hatebreed’s goal is to keep that spirit going in the same vein as their predecessors.

Jasta sees a rejuvenation in the quality of music they’re putting out today, too. He also views the modern metal and hardcore scene as an inspiration for everyone to step up their game in terms of quality. He says the availability to freely release music in the age of the internet and streaming services drives this.

“We’ve seen with certain styles [that] the cream rises to the top, and bands can be bigger than the previous generation of bands,” Jasta says. “That’s a good thing to look at, whereas back in the day, it would be, ‘This band are bigger than this other one, and you’ll never be bigger than that band.’ There was always a ceiling.”

Touching on independent bands today, Jasta insists streaming offers better opportunities, no matter the size of the act. In the past, not having record deals has limited many artists’ reach. But today, he says, bands can reach their fanbase in increasingly intimate ways through technology, social media and the internet.

Read more: Here’s when you can get the back catalog of punk icons Bad Brains

“I think it’s nice having the opportunity to get stuff out a little quicker,” Jasta says. “It’s hard if you’re not doing it yourself. If I was doing a record myself, I could probably put it out within three weeks, which is very nice. Not with vinyl. [With] vinyl, you need a lot of lead time. But digitally, if you were a band and had a bit of a fanbase of even 500 to 1,000 fans and if you kept your recording costs pretty reasonable and you sell 1,000 copies of a record, now you’ve got a little bit of money to work with.”

As for what Jasta is planning for the next while, he says with no touring, he’s preparing to record material with various projects. He hopes to pump out a new solo record every year, including an upcoming thrash-metal-oriented one and a special re-recording that should have longtime Hatebreed fans very excited.

“At some point, I do want to re-record a bunch of the Hatebreed catalog,” Jasta says. “I feel like if we did all of the Under The Knife songs and the demo tracks with this lineup and the modern production, I think those could be great.”