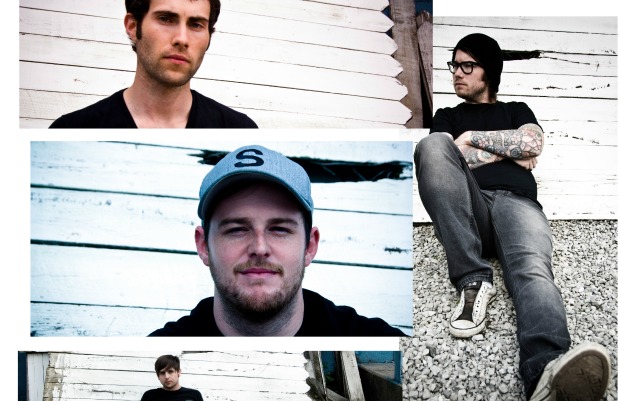 It’s not that Hawthorne Heights can’t catch a break. They’ve had plenty of breaks, but every one they get seems to leave them broken. Still, the band’s soldiered on despite the obstacles—and in 2009, they signed with Wind-Up Records, an EMI affiliate that’s home to Evanescence, Creed and Seether. The band’s fourth original album, Skeletons, debuted at No. 50 on the Billboard chart in 2010—but didn’t satisfy the label’s radio-rock constituency or longtime fans who flinched at the record’s gentle artistic departures.

Now Hawthorne Heights have split with Wind-Up and launched their own anti-label, Cardboard Empire. The band are now managing themselves and self-produced their new EP, Hate, due August 23. That same week, they launch a two-month North American tour, returning to the same sweaty rock clubs that launched their career. Frontman JT Woodruff and drummer Eron Bucciarelli exclusively spoke to AP about their new label, three upcoming EPs, the tour’s setlist, and the highs and lows from a decade of tragedy and triumph.

What’s the meaning behind your new label name, Cardboard Empire?
JT WOODRUFF: It was our bass player Matt [Ridenour]’s idea. It explains a lot about how the industry is paper-thin; everybody’s packing up their stuff in cardboard boxes, in their office, and they just got fired. If you know your empire’s made of cardboard, then you know it can fall just as easily as it can be re-erected.

Was the contract with Wind-Up for one album with options?
ERON BUCCIARELLI: Yeah. It was a one-plus. What it boiled down to was: All record labels are losing money hand over fist, because they’re still trying to operate in a world that only focuses on physical music. [Wind-Up] ran into some financial problems and changed hands, and they’re still trying to get their feet on the ground. And they didn’t want to continue working with us. They’re getting down to working with the artists who make them the bulk of their money, like Evanescence and Seether.
And that’s fine with us, because I felt like we didn’t necessarily get the attention we wanted. We’ve been in this industry the last eight years now, and we’ve learned a lot from our experience with Victory and Wind-Up; we’ve got a good grasp of what we can do on our own. And we all feel we can get our music out there successfully on our own.

What were you not getting from Wind-Up?
BUCCIARELLI: They didn’t really understand our fanbase and market. They live in the mainstream-rock-radio world. And even though we’ve had some mainstream success, we really come from a more underground world, a more Warped Tour-type crowd. They weren’t really targeting those people.

Did you feel like they were trying to break you to their audience?
BUCCIARELLI: They do their thing. They’re really good at promoting bands at radio. That’s where they put their marketing and promoting efforts. And if it doesn’t really happen at radio, they’re kind of at a loss. So they pushed us at radio, and radio said, “Eh, we’re not into that.” And that’s fine.

Is your label an imprint?
BUCCIARELLI: We’re not an imprint of anybody. We’re going to be distributing our music online through sources like TuneCore. Not to say we won’t take physical distribution down the line. But for now, we’re going to distribute physical copies through our web store and shows. In our opinion, the physical format is going the way of the dinosaur, and it doesn’t make sense to invest a lot of money into stocking up on an inventory.

How many CDs will you print?
BUCCIARELLI: Since this is us and we’re putting our own money into it, we’re only going to press up 1,000 copies. We’re trying to make physical copies more of a collectible thing. If we sell through those, maybe we’ll press some more.

You’re planning to release three EPs. Are they a trilogy?
BUCCIARELLI: We’re going for a little bit of a larger concept with this. The first EP is titled Hate, and it’s trying to get out some of the emotions from our past dramas with Victory and dealing with the death of our bandmate, Casey [Calvert, who died in 2007]. A lot of these things, we never really got them off our chest. The last two albums didn’t really capture the emotion that was going on. For one reason or another, we held back a little bit. So, long-term, we’re hopefully going to continue being a little more truthful and more honest and not let things sit and eat away at us.

When you say you held back, were there specific songs that didn’t deliver, or in general?
BUCCIARELLI: In general, emotion-wise. When you go through some of the really traumatic experiences, from suing your record label, being counter-sued, getting in lawsuits with your managers, ultimately ending up in bankruptcy because of bad legal advice, and losing one of your best friends—there’s a lot of anger there that wasn’t really expressed through our last two albums.

WOODRUFF: It’s tough to write a collection of songs and tell exactly how you feel for a year, because there’s so many ups and downs in your life in a two-year-period. And I think we would have maybe liked a couple more pissed-off, angsty, aggressive songs that just tell it how it is, and we just didn’t have time.

So what’s the general concept for the trilogy?
BUCCIARELLI: The general concept is to push ourselves as far as possible as musicians, friends. employees and as our own company. Way long ago, it was about releasing collections of songs. It wasn’t weird to release two albums a year.  Releasing one album every two years—that ties you down. And I totally get why you do that. But as a musician, it ties you down to playing those songs and focusing on 10, 12 songs in an 18-month period. We just want to be creative over and over and over.

WOODRUFF: We had a lot of fun working with Skeletons. It was great working with [producer] Howard Benson. It was great being in Los Angeles. I think he got great performances out of us. He really kicked my ass in the vocal booth. But this time around, with nobody else is the studio, with us pushing ourself, it was more raw. That’s when we have the most fun, when we’re on stage together. That’s what we wanted to get back to.

Heavy how?
BUCCIARELLI: Guitar tones, breakdowns, there’s screaming going on—which I think some of our old fans might be into.

So why a trilogy?
BUCCIARELLI: I think we just wanted to do something a little more ambitious. And we didn’t want to do a full-length album, because our feelings change so rapidly. We realized the industry has changed—there’s not a reason to release a full-length album these days. We wanted to have the creative freedom to change up the album or add some creative elements in that might not fit on [a single] album.

Do you have release dates set for the other EPs?
BUCCIARELLI: Every four or five months, [we’re going to try to] release a new EP. We have our own recording studio, so whenever the mood hits, we can get in there.

Will we hear more instruments like the ukulele and mandolin, the departures we heard on Skeletons?
BUCCIARELLI: In the long term, yes. Absolutely. We have a wide array of creative influences, and that’s something we’ll definitely be bringing to the table. And that’s another reason we’ll be releasing three EPS. Elements like the ukulele and piano won’t be present on Hate, but will probably be on the other EPs.

You manager passed at a terrible time—not that there’s ever a good time for that kind of thing. But the band had moved heaven and earth to be with Stu Sobol’s management team.
BUCCIARELLI: It was frustrating. It felt like there was a black cloud following us wherever we go. And even up through today, I think we’ve felt that for awhile now.

He was the first manager that we’ve had that I truly respected and I felt had a long-term vision for our band, that really cared about our career. He was the one who was able to talk some sense into us and get Victory to start negotiating with us and talk us off our high horse when were like, “We don’t care, we’ll kill ourselves in the process of killing them!” He talked us down from that. And it sucked. Because it felt like, “Alright, we’re finally going to get something going here.”

In retrospect, you feel like you were over-aggressive in your Victory lawsuit?
BUCCIARELLI: Yeah, absolutely. Had we known then what we know now, we definitely wouldn’t have pursued that course of action. We were naïve about how the music industry works. We were arrogant about our abilities. And I think we would have done things a little differently. We would have attempted to negotiate first, as opposed to filing a lawsuit out of the gate. And [not] saying some of the things we said. We still had some disagreements with the way things were handled while we were on Victory, but I think we would have handled things a lot differently.