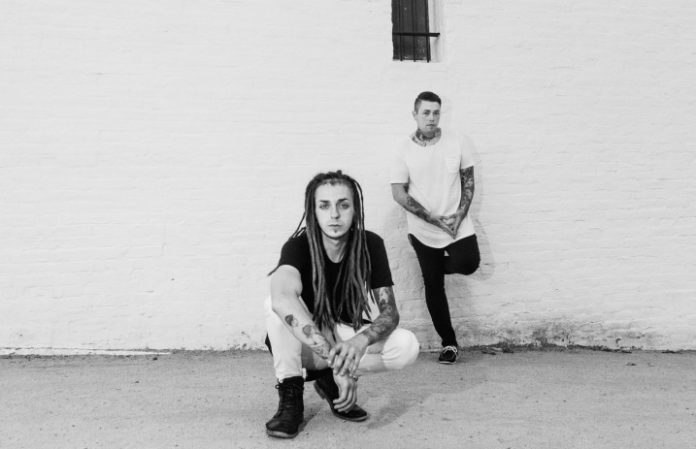 Former A Skylit Drive members Joey Wilson and Cory LaQuay have returned to the scene with a brand new project: Avant Garde. Having just signed to Tragic Hero Records, the duo will release their debut album, Fire Walk With Me, on Aug. 5.

In the meantime, you can check out the very first song ever released by Avant Garde, titled “I'm 100% Sure We Are Not Completely Sure,” exclusively through Alternative Press. You can preorder Fire Walk With Me here.

We had a chance to catch up with Wilson and LaQuay to discuss their departures from their former band and get all the details on what they have in store for this budding project.

Do the two of you want to offer any insight as to your respective reasons for leaving A Skylit Drive?

Joey Wilson: When I was in Reno, Nevada, on the All Stars tour in 2012, my partying had gotten out of hand and the band had asked me go home and get some help. [They said] I was not being kicked out of the band. I packed up what I had and left back to Lodi, California, to enroll myself in a rehab program at Kaiser in Manteca, California. I successfully completed 55 days of rehab and was clean. The band had come home, and I was writing everyone asking when practice for Pulp Summer Slam in the Philippines was. I got little to no response from anyone, so I figured something was up. I then wrote a letter to quit the band explaining that I was going to go to college and start my life away from the band. The same day that letter was written, Kyle [Simmons], Nick [Miller] and Brian [White] showed up at my house and told me they were going to continue as a five-piece band. I said, “That's fine, I understand.” That's exactly what happened.

Cory LaQuay: After being with A Skylit Drive for seven years, I definitely felt my last three years with the band were a real struggle. I was constantly asking myself why I was still doing this if I was so unhappy. Staying in the band didn’t make sense, both emotionally and financially, yet I felt the need to carry on and keep playing music for the people. I decided to leave A Skylit Drive the last day of Warped Tour 2014. It was then that I finally realized I had to give up on this project and move on. To be honest, that tour took a real toll on my sanity and my well-being; my heart was telling me it was time to move on. We weren't friends anymore; we weren’t homies making music together. We were co-workers who had a different vision and perspective of life. [Plus, there was the matter of] not getting paid. Joey and I both felt that one of the “financial managers” was looking after what he thought was “the band's best interest” and never paying us at the end of tours. He was withholding money from the band and keeping backup money for bills since they were mostly in his name. So we would tour for 300 days a year and make less than our guitar tech or merch guy individually. The money was getting made, but we weren’t seeing it. It taught me to know what you’re getting into and to pay attention to the people around you.

Are you in touch with those guys at all or is that relationship off the table at this point?

JW: We're not necessarily in constant contact with the other members but we have no hard feelings toward any of them whatsoever. We are just chill dudes trying to live our lives, and we hope they enjoy the new project.

So tell me about how the idea for this band came together. What had you two been up to, musically, leading up to kicking off this project?

JW: We were both working on things outside of the “tour life” and started to get that itch to make music again. We decided since the foundation of ASD was with Cory and myself, that we could go back to our roots and start there.

Did you guys ever discuss adding more members or was this always meant to be just the two of you?

JW: It was always meant to be just the two of us writing the records. We didn’t feel like we needed a full band to express ourselves. However, we will recreate the sound of the record for live shows, which will require our live drummer, Zack Wasmundt, [and possibly other members].

Your debut is titled Fire Walk With Me, which is obviously a Twin Peaks reference, but it's also part of a very recent A Skylit Drive lyric. I know you've already taken at least one jab because of this. Why did you land on this for the album's title? Are you trying to antagonize or is it just a coincidence?

JW: Coincidence, since I have not listened to the newest record. I'm a devout Lynch [fan] and wanted to name a song that before I had departed. “There is nothing new under the sun,” and you’ll see the record has a slight theme to it. A real artist knows everything is influenced by something or someone; we just don't realize the origin of where it comes from or the sources involved. I will never antagonize anyone. I have too much respect for music to start drama over something so trivial.

Considering your histories, comparisons are going to be inevitable, but when writing this album, did you have any kind of mission to intentionally set yourselves apart from your old band?

JW: Not at all. Nothing is forced; we wrote what came naturally. We’re just two friends inspiring each other and having fun making music—like it should be.

And how would you describe this current sound and some of the themes on your debut?

JW: It's hard to put a label on the genre as we experimented with lots of different sounds, but we will let our fans define us.

Joey, I noticed you wearing a particular shirt, and as a longtime fan of the show, I need to know: Will there be any references to or influences from The X-Files on this album?

JW: There is a song titled from The X-Files, yeah. There is also talks of alien conspiracies and extraterrestrials. Obviously, there is a Twin Peaks, Lynch vibe to it. Maybe I'm just trying to get Mr. Lynch to give Cory and I a phone call. [Laughs.]

You had both worked with Tragic Hero through ASD in the past. Did that make it an easy choice to work with the label for this release? It seems like a smart fit.

JW: Yes. Tommy [LaCombe, owner of Tragic Hero] has always been there for us and truly means well, and we've also known him since we were 17 years old. He's the first person we went to for advice on the project. We knew he wouldn't steer us wrong, so it kind of came together from there and made sense.

Overall, what's your guys' goal for this project as of now? Do you foresee any touring plans or anything long-term like that?

JW: Since signing with Tragic Hero, there’s now a lot in the works. It’s hard to say what path we will take. We initially made the project because we needed to make music, and when it blows up of course we’ll take it as far as it will go.

It's been, what, just over a decade since you guys started with A Skylit Drive? How would you say you've developed as musicians and maybe changed as individuals in the past 10 years?

JW: Well, in ASD Cory played drums and contributed to the backing vocals. Now he's the vocalist and lyricist. We've also matured, gotten wiser and don't give a shit about what's “cool” and “not cool.” We're constantly growing as musicians and that will never stop. We want to have fun, make some badass music and create positive vibes through our art.

JW: This band is more than just a music project; we are working on visual art that goes along with the music and will complement the record. Please stay updated by following us on all social media networks and pre-ordering our album. We love our fans who have been with us since the A Skylit Drive days and they should feel welcome to reach out to us any time! alt