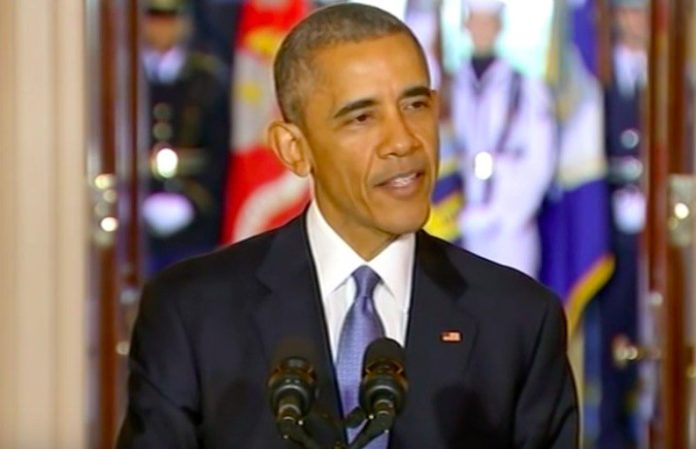 “Whether we have seen eye-to-eye or rarely agreed at all, my conversations with you, the American people—in living rooms and in schools; at farms and on factory floors; at diners and on distant military outposts—those conversations are what have kept me honest, and kept me inspired, and kept me going,” President Obama said in the address. “And every day, I have learned from you. You made me a better president, and you made me a better man.”

1. President Obama confirms he is not the lead singer of Korn

During a Medal of Honor ceremony in November 2015, President Obama told the story of recipient Florent Groberg, who tackled a suicide bomber and saved the lives of fellow service members, but severely injured his leg in the process.

Groberg was visisted by Korn singer Jonathan Davis during his recovery process. However, Groberg was too dazed to make anything of the encounter and chalked it up to a hallucination.

President Obama said in the Medal of Honor speech, “Flo, I want to assure you, you are not hallucinating. You are actually in the White House. Those cameras are on. I am not the lead singer from Korn. We are here to award you our nation's highest military distinction.”

A month after President Obama confirmed he is in fact not the lead singer of Korn, the quickly internet responded.

The response: A video of President Obama singing “Freak On A Leash.” Enjoy Obamathan Davis:

President Obama welcomed leaders from five Nordic nations for a one-day summit in the beginning of 2016, during which he took a moment to shout out Finland’s heavy metal music.

“I do wanna point out that Finland has perhaps the most heavy metal bands in the world per capita, and also ranks high on good governance,” he said. “I don't know if there's any correlation there.”

BOTS “prohibits the circumvention of control measures used by Internet ticket sellers to ensure equitable consumer access to tickets for certain events.” This makes it a federal crime to use bots to buy concert tickets.

In recent news, Spotify has posted a “President Of Playlists” job on its site, one with requirements that are definitely geared towards President Obama.

Requirements include “eight years experience running a highly-regarded nation” and a Nobel Peace Prize under the applicant’s belt.

Hey @BarackObama, I heard you were interested in a role at Spotify. Have you seen this one? https://t.co/iragpCowpO

Having issued many Spotify playlists, this news comes after President Obama told the wife of the former US Ambassador to Sweden “I'm still waiting for my job at Spotify… Cuz' I know y'all loved my playlist.”

Check out the job position here.

During her Let’s Move campaign, First Lady Michelle Obama visited University Of Northern Iowa. At the time, students of the university had been receiving worldwide attention after creating the “Interlude” dance, which uses Attack Attack!’s song of the same name.

Naturally, when she visited, Mrs. Obama did the dance with 14,000 kids. Check out footage below.

Called South By South Lawn, President Obama’s music festival was held on Oct. 3, 2016 and was meant to “bring together creators, innovators and organizers who work day in and day out to improve the lives of their fellow Americans and people around the world.”

What’s your favorite moment? Let us know in the comments!