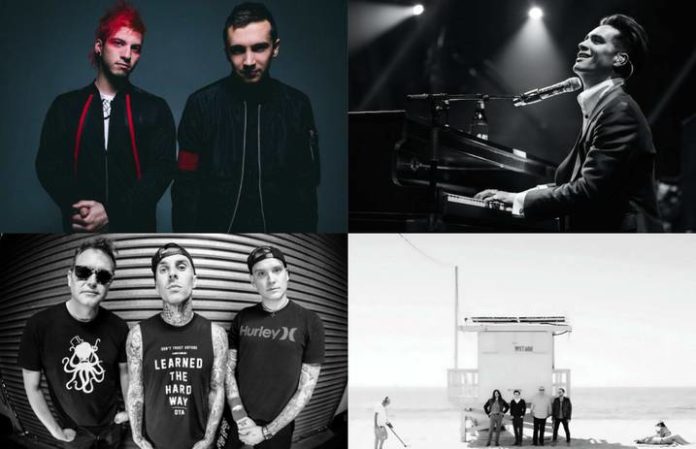 Just yesterday, nominees for the 59th annual Grammy Awards were announced. You might have noticed quite a few artists from our little notch of the music industry—Twenty One Pilots, Blink-182, Panic! At The Disco, Weezer, Periphery and Korn, to name a few—are among the many talented artists who nabbed nominations.

With the Grammys receiving 21,719 submissions this year, the surge of nominees from our scene isn’t because of a dearth in viable options. “I think what’s going on right now is that artists have greater creative freedom and they’re taking more sonic risks than ever before. That makes for an exciting and dynamic musical landscape,” says Grammys Senior Vice President Of Awards Bill Freimuth. “A lot of the emerging and established artists are resisting expectations and taking things to a new place. AP is a place that has recognized that and is celebrating that, so I guess we’re joining you in that way.”

Blink-182 and Panic! At The Disco—no strangers to mainstream success—have both received their first nominations for their chart-topping 2016 releases. (For those keeping score, Panic! were nominated in the Best Boxed/Special Limited Edition category in 2008 for A fever You Can't Sweat Out, but this is their first music-related nomination.) Freimuth attributes this to the stars aligning. “They came together in a way that the statements that they made really resonated with our voters. They’ve reached a pinnacle in their own careers, put out terrific music and that was recognized by our voters,” he says.

Another thing this year’s nominations have illuminated, Freimuth says, is the debate that art and commerce are mutually exclusive. “That debate is over. Whether you’re looking at Beyoncé or Sia, it proves the commercial viability of high art and we can see that in the rock field, as well,” he shares. “When you talk about Blink-182, Twenty One Pilots, Panic! At The Disco, I can’t imagine that they said, ‘Let’s do everything we can on this album to entrance the Grammy voters.’ No, it all just came together for them to make great recordings and I’m very pleased to say that our voters, who are peers, have recognized that. There is no one out there who can evaluate music better than the creators who are familiar with the creative and technical process.”

We’ll have to wait to find out who wins until Feb. 12, when the Grammys—hosted by James Corden—broadcast live on CBS from the Staples Center in Los Angeles. But in the meantime, we were curious about how the nominees were chosen. With just shy of 22,000 possibilities, how does the Recording Academy work it down to a reasonable, listenable amount of music? We spoke to Freimuth in depth about that process. Here’s what we learned:

Establishing Eligibility
You might be thinking to yourself, “But what about Green Day?! (or Bruno Mars, or the Weeknd, or Metallica, or Avenged Sevenfold or any of the other artists who came out with awesome albums in the latter half of this year).” Well, to be eligible for this year’s nominations, a release has to have come out between Oct. 1, 2015 and Sept. 30, 2016. So we’ll have to wait until next year to see if those get nominated.

The next thing is recording dates. It needs to have been recorded within five years of the release date to be eligible. “That doesn’t affect pop and rock music very much,” Freimuth says, “but some of the other categories where there’s a more significant lag time between when it was recorded and when it was released.”

Last is distribution. “We have to make sure that it is distributed nationwide via third party retailers and streaming services and not just CDs sold out of a trunk at a concert or on a label or an artist’s website,” he shares.

Sorting Out Genres
This is perhaps the most intriguing step in the nomination process. Maybe you noticed that Twenty One Pilots are nominated in two genres: Pop and Rock. And it’s actually quite common for one artist to be nominated in two genre fields. What’s not common, though, is going beyond two genre fields in a single year. However, the Grammys have a record this year. Nominated in six distinct award fields, Beyoncé is the most musically diverse artist this year, holding nominations in Rap, R&B, Pop and Rock, as well as the video and general fields. Beyoncé is not the only nominee to have nominations in four different genre fields; however, she is the first to have nominations in all those fields in the same awards year.

So who decides what genre field something belongs in? There are 24 committees with an average of about 15 people per committee. The largest committee deals with Pop, Rock and Best New Artist and has 70 people in it. For something like traditional pop, there are only a handful of people, because as Freimuth says, “that is relatively straightforward.”

Freimuth says he hears from the people who sort submissions that it gets more difficult each year to distinguish between genres. “While certain recordings can sit very squarely in a certain genre, there are plenty of recordings that really straddle that line,” he says. “Most artists, when they go out to make an album, make a single, they don’t say, ‘Well, I’m going to make a rock single,’ or, ‘I’m going to make an R&B album.’ They just make their music. We have to figure out where that music then goes.”

Voting
But narrowing it down to the final nominees falls largely on the members of the Recording Academy. “Mostly it’s the first ballot that goes out to the voters, and we rely on their diligence,” he says. “We hear anecdotally from lots of voters that they spent quite a great deal of time going through these lists. If you’re a fan of a particular kind of music, chances are you’ve heard a lot, perhaps a majority of what’s on a list in a particular genre, but then you have to go out and hunt down the rest of it if you want to be that diligent of a voter and many of our voters, if not most, actually do that. They spend the time, they get on Spotify and YouTube and wherever else they can find stuff and listen to it and vote for whatever they think is the best.”

Who Gets To Vote
There about 13,000 voting members of the Recording Academy, and the key is that all voting members are professionals in some facet of the music industry. It’s not amateurs and hobbyists voting, it’s people directly involved in the creative process. “They are all creatively involved in making music. They are artists, songwriters, producers, engineers, and in certain places, we’ll have arrangers, composers, video directors, [liner-note] writers,” he says. “All those people who make a creative contribution to the music academy.”

And not all members vote in all categories. “We require that people only vote in genres in which they have expertise, and so the way that we spell that out for them is that everyone can vote in the general ones—the top four categories,” Freimuth says. “And then the people may choose up to 15 categories in the genre fields in which to vote. And some people say, ‘Hey, all I really know is rock music, so I’m only going to vote in the four rock categories and nothing else. And other people vote in 15.’

To find out who wins a coveted Grammy, watch the 59th annual Grammy Awards Feb. 12 on CBS.