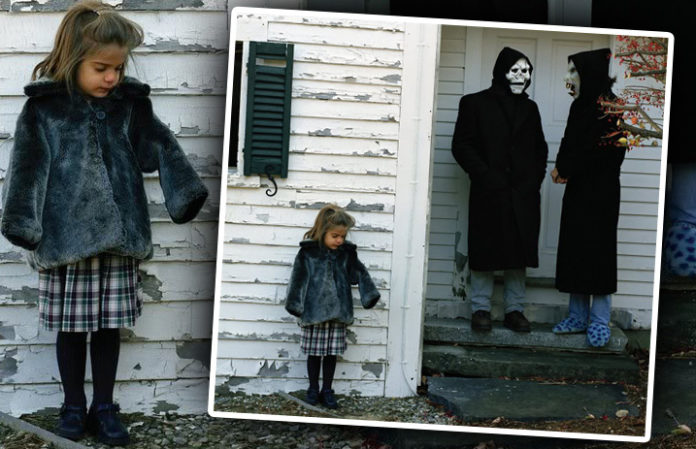 November 20 will mark the 10-year anniversary of Brand New’s acclaimed third release, The Devil And God Are Raging Inside Me. As iconic as the album itself is the artwork that accompanies it: The photo depicts a little girl against the stark backdrop of a weathered New England home and two adults wearing sinister masks looming nearby. Curious about the young girl who became the subject of T-shirts, tattoos and artwork enjoyed by a legion of fans around the world, we contacted the photographer of the celebrated image, Nicholas Prior. We learned that the girl in the photo is related to him and that he was actually planning to share a current image of her (which we have exclusively). We spoke to him at length about the photograph—called Untitled #44—what inspired it and the collection of photos it came from, as well as how his relative reflects on being the subject of such an iconic image.

What made you decide to shoot these images of the girl more than a decade later?
I’m not sure why I decided to share a photo of the girl now after 10 years. I think it has something to do with the fact that music can function like a photograph; it can freeze a moment in time. When you listen to a song it can bring you right back to that moment you first heard it, despite the fact that 10 years have passed.

Untitled #44 is part of your collection The Age Of Man, which your website says is influenced by Freud's writings on The Uncanny and the idea that an adult cannot look back on childhood as a child. Can you address the inspiration and meaning behind the photograph and how that fits with the collection as a whole?
Freud said that we have memories of childhood, but no memories from childhood. The memories we have of our childhood are filtered through our adult needs and desires and often serve as proxies for darker experiences. Children have the complexity, nuance and depth of adults—it’s only our memory of childhood, which is simple and sentimental. When I was starting to create the Age Of Man series, I was primarily interested in taking children seriously, avoiding condescension and not sentimentalizing their experiences.

“The inclusion of the slippers, for me, represents something darker and more disturbing to me than the mask by itself, because it suggests something incongruous, something off-kilter. In fact, that is probably the one detail most emblematic of the album title.”

The Uncanny refers to the cognitive dissonance that occurs when we experience things that are simultaneously familiar and unfamiliar, comforting and disturbing. During the time I was shooting Untitled #44, I was considering elements and motifs that might invoke the uncanny on a universal level. Masks, for example, are inherently uncanny in that they fuse the animate (living) and the inanimate (dead)—the person wearing the mask becomes dead and the mask itself becomes alive. The fact that the masks in the image happen to be scary is beside the point—what’s significant is that the adults are wearing masks.

Untitled #44 also contains a lot of other contradictory or dissonant elements. The house can be seen as either homey or decrepit; the berries can be seen as either food or poison; the girl’s simple gesture with her sleeve belies the presence of the two masked adults; and one of the adults is wearing a death mask but also a pair of fuzzy, polka-dotted slippers. The inclusion of the slippers, for me, represents something darker and more disturbing to me than the mask by itself, because it suggests something incongruous, something off-kilter. In fact, that is probably the one detail most emblematic of the album title.

How did you come up with the concept? What can you tell us about the location/masks/wardrobe used?
The image was made in response to a concept, an idea that I had, but that’s not to say the image was wholly preconceived. I think the most preconceived element of the photo was the masks. The rest of it had more to do with responding quickly to what I saw and sensed. The old house and barn, the clothing, the framing—these were decisions I made pretty quickly.

Broadly speaking, I think the location was very important. I considered the old New England interiors and exteriors to be a crucial element to the entire series. For me, certain parts of New England seem to be steeped in dark romanticism, a Northern equivalent to Southern Gothic. When you look at the old buildings, you don’t see one single story, you see layers of stories, like layers of peeling wallpaper. I thought that this particular view of New England was well suited for images relating to the uncanny.

The photograph was taken in 2003, and the album was released in 2006. How did the band come across the image? What did they say when they asked if the image could be used for the album?
I don’t know specifically how the band first came to see the image. The band presumably first saw the image at my solo show at Yossi Milo Gallery in New York City. I assume there was one person who made the first suggestion to use it, though, and I don’t know who that person is. The band didn’t reach out to me directly; rather, Interscope Records (Universal Music Group) contacted my gallery, so there were several intermediaries involved. Originally, when Yossi first told me about the offer—and before I even knew which band was behind the request—I declined. The band was very committed to this image, though, which meant something to me, so I asked a few more questions—chiefly, about which band was behind the request, and their intended treatment of the image. Interscope sent me an advanced copy of the album, and listening to it clearly sealed the deal. I agreed to cropping the image to a square, but I didn’t want any text on the cover which, I think, makes the cover much more compelling and intriguing—though it did seem to confuse David Letterman.

When Brand New fans contact you, what do they inquire about most often?
Fans primarily inquire about purchasing the photo, and about the meaning of the photo. They ask me where the image was shot (which I don’t disclose out of respect to the current owners). They also ask where the masks (and, occasionally, the fuzzy slippers) were purchased. Unfortunately, I’m not the one who purchased them, so I’m not much help there either. Last year, I was reunited with the masks for the first time since I shot the photo, which was kind of surreal, even for me. I posted a clip of them on Instagram, which brought on a whole slew of more inquiries.

#Halloween. So I was recently reunited with the masks from Untitled44, the image used on the cover to the Brand New album, The Devil and God Are Raging Inside Me, kept in pristine condition by their faithful owner. Track 5 / Limousine? #tdagarim #brandnew #brandnewband #brandnewrock #mask #reaper #brandnewfans #dejaentendu #thedevilandgodareraginginsideme

A video posted by Nicholas Prior (@nicholas.prior) on

I’ve also gotten some requests for internships from aspiring photographers, some requests to license other images for other album covers, and a lot of fans sharing fan art, including several photos of tattoos based on the image. Brand New have some incredibly loyal and creative fans.

You said you’ve received some requests to license other images for other album covers. How have you responded to those requests?
I haven’t yet agreed to license any other image to any other band. It’s conceivable that I would, but I would have to believe that it’s the right fit. There are other design considerations as well—whether the image would be cropped, whether text is required and so on. I would want to be responsible for the full design, or at least have approval over the final design.

How do you think the image fits in with the feeling of the album?
I love how the image fits with the music; had I not, I wouldn’t have licensed the image. But I also don’t think the connection needs to be obvious or pedantic. A certain amount of mystery and ambiguity leaves room for people to make their own connections and interpretations, without having everything spoonfed to them. Also, the songs—both the music and the lyrics—are layered. That’s something I think holds true for the photo as well, so I think they work together on that level.

How does she reflect on being the subject of such an iconic image?
Over the years she’s seen her likeness in stores, on T-shirts and tattooed on people’s arms. She’s also seen the image published in books and magazines and knows it’s been exhibited in galleries and museums around the world. Meanwhile, as she’s grown, she’s also come to know Brand New and their music, so while it’s always meant something positive to her, I think the significance of it grows and evolves and she does.

When I asked her about it she texted me the following:
“Brand New fans feel very emotionally connected to the music. The album art contributes a lot to the music's meaning, so by simply being in the photo, I feel like I’m contributing to an emotion felt by [their]  fans. I consider myself a small part of the vehicle to help people learn more about themselves and what they love, which is a real honor.”

Is there anything else you’d like to add?
Only that I have tremendous gratitude to have been a part of the Brand New universe.  As I previously indicated, the decision to license the image wasn’t one I made in haste.  In retrospect, though, it was far more rewarding than I could have imagined.

We’re all artists, and we’re all fans, and when we find mutual significance in something it connects us in a very meaningful way. alt