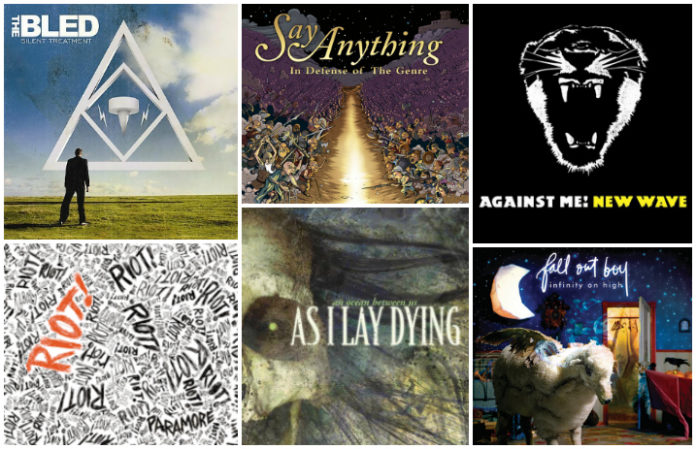 We recently dropped our list of 20 albums we can’t believe turn 10 this year, and that was just scratching the surface of what was blaring through speakers in 2007. We thought it would be a fun experiment to ask some musicians what they were listening to a decade ago. While not all of these albums dropped in ’07 (Hey, you try to remember 10 days ago, let alone 10 years), the responses give you a peek into the past.

TJ Horansky, Sleep On It

The ones that come to mind are Four Year Strong, Rise Or Die Trying. I really love Paper Walls by Yellowcard, which came out in 2007—that was an album that really defined that year for me and is one of my favorite Yellowcard albums. I think Infinity On High, that’s another. We all really like Fall Out Boy, especially Jake [Marquis, guitar/vocals] and Zech [Pluister, vocals], that’s their favorite band. Also Mayday Parade’s A Lesson In Romantics, that’s big influence on the guys in the band, that’s another big one.

My favorite record in high school? I was such a loser. I was listening to older stuff. I would say It’s A Shame About Ray and the band is called the Lemonheads. I was pretty into that band when I was graduating high school. It was definitely in my CD Walkman on the bus ride. [Laughs.]

Manipulator by the Fall Of Troy.

As I Lay Dying’s An Ocean Between Us.

There were a lot of good records that came out that year. The first Blaqk Audio record came out, but I can’t say that. [Laughs.] I would have to say Year Zero by Nine Inch Nails.

Silent Treatment by the Bled.

Lyrically, I grew up admiring bands like Brand New and Boys Night Out. Those are the kind of bands that utilize clever wordplay and interesting metaphors and double entendres and alliteration. I think for those reasons I return to those records to this day.

Deliver Us by Darkest Hour.

Matt Tuck, Bullet For My Valentine

Definitely Machine Head’s The Blackening. It was an amazing return to form that shut up all the doubters, and still an incredible record.

This is going to be a bit of a wildcard. 2007, I was in high school, I was probably in grade 10, and I was listening to a lot of metalcore. I'd have to check the date it was released, but maybe the Acacia Strain's Continent was in heavy rotation in 2007. We were all big metalcore fans in high school.

It might have been 2006 or 2007, I don’t know—I’m really into a band called Rogue Wave. They’re one of my favorite bands. 2007 was the start of our band, but before that, I remember being in college—I went to college for a year—and I remember there were a few things that we circled through. There was: The Devil And God by Brand New had just come out—which was huge for me—Rogue Wave [Asleep At Heaven’s Gate] had come out. I would probably say Rogue Wave were my favorite album from that year. Or Cassino. Cassino put out an album [Sounds Of Salvation] that was really important—that was the singer of Northstar, who had put out a side project. I’d probably say that one.