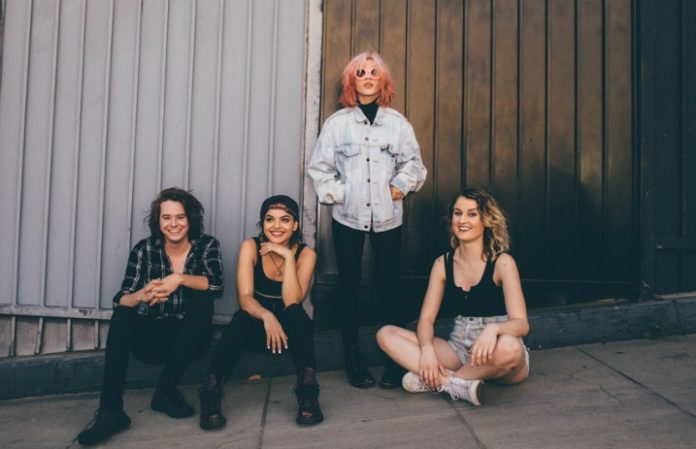 For years, every pop-punk single has had the same basic storyline: “This stupid girl broke my heart, fuck her.” Well, thanks to the badasses in Hey Violet, women have their own anthem to shout back.

You probably know them best from the addictive I Can Feel It EP—five songs released in 2015, all guaranteed to be stuck in your head for weeks. For the past two tours, they’ve opened for massive crowds before 5 Seconds Of Summer, as well as playing their own acoustic sets outside of the venues before each show. And now, with a second EP under their belt, they’re destined for even more.

Read more: “By no means are we famous”—Hey Violet talk success and Taylor Swift

Granted, Hey Violet aren’t strangers to reinvention: Three-quarters of the lineup used to be in Cherri Bomb, a band that opened for Foo Fighters and the Smashing Pumpkins, and had a slot on Warped Tour in 2012. When that vocalist departed, Miranda Miller (keyboards, backing vocals) and sisters Rena and Nia Lovelis (lead vocals/bass and drums, respectively) regrouped, added guitarist Casey Moreta and quickly signed to Capitol’s imprint, Hi Or Hey Records.

Their newest EP, Brand New Moves, (out on Caroline Records) is only three new songs (plus two remixes), but it shows an abrupt departure from I Can Feel It. From the sultry, opening title track to the electric “Pure,” they’ve lost most of the guitar-riffing, earworm-inducing hooks, but added an edge their fans have been craving. Where I Can Feel It was all windows-down summer tunes, Brand New Moves adds some winks, some nudges and way more sass.

But the most compelling (and catchy) track is “Fuqboi.” Both anthemic and tongue-in-cheek, it tells the story of a boy who steals lines from Drake and overuses the hashtag #beastmode (we’ve all been there). It’s snark with a smile, meant to be played at speaker-blow-out volume with both middle fingers up. With this, Hey Violet have proved they can write diss-track doozies just as well as their standard brand of happy-go-lucky pop.

But mostly, “Fuqboi” shows they aren’t here to be cute, they aren’t here to be the “girl band” opening for 5SOS—they’re here to jam the fuck out. And you’re gonna like it. Considering how often young women are maligned in music—everything from being mocked for whatever music they like to being groped in crowds—how empowering is it to have the chorus of a single be, “He’s a fuckboy/and they’re all the same”?

So drag all three of these new tracks onto your playlists and welcome a new kind of “breakup song.”