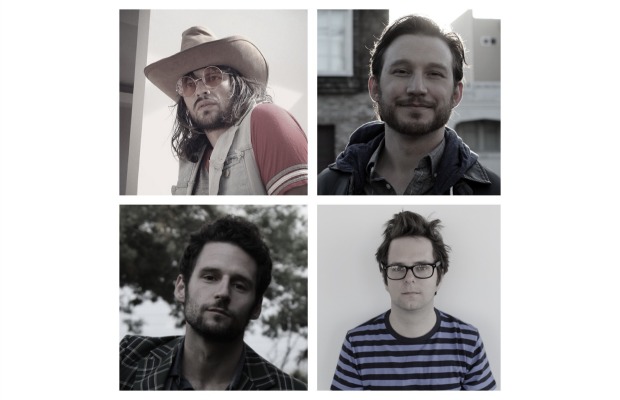 Like any good reunion, it all started with an innocent Instagram post. When AP editors noticed Bay Area pop-punks THE MATCHES were becoming active on social media after a prolonged period of dormancy following their 2009 breakup, we hit up frontman SHAWN HARRIS to see what was going on. He said the band had no plans to get back together, but only a few months later, we were pleasantly surprised to find the band’s original lineup—Harris, guitarist/vocalist Jon Devoto, bassist Justin San Souci and drummer Matt Whalen—reuniting for a Bay Area show to celebrate the impending vinyl release of their first album, E. Von Dahl Killed The Locals. Then it was two Bay Area shows. Then three. Then a handful of dates scattered across the country. Then the vinyl pressing sold out in an instant, requiring an immediate second pressing. AP managing editor Scott Heisel hopped on the phone with Harris recently to find out just when this train is gonna slow down—if it is at all.

Let’s go back to the beginning of this whole thing: Back when you started posting nostalgic images on the Matches’ social media properties earlier this year, we reached out to ask if you were hinting toward a reunion and at the time, you said no. But you’ve since told us via email that our inquiry was the spark for this reunion. Is that really true?
SHAWN HARRIS: It actually is true. This whole thing has been really organic. We definitely didn’t plan on playing any shows. I had breakfast with the guys in January—we were all back in Oakland and we thought it would be fun to meet up and hang. We met for no reason, I swear to you. [Laughs.] And then Matt mentioned to us that we would be getting the rights to E. Von Dahl Killed The Locals back from Epitaph. I completely forgot that we had licensed that record to Epitaph. So at that breakfast, we were like, “Shit, I guess we should put it out again, so let’s start an Instagram and hint to the world that something’s coming.” But honestly we had no idea how nostalgic people would get or would remember or give a shit. Honestly we didn’t really think it through. When you guys hit us up and asked what the story was and if we were going to be playing any shows, that was the first time we had heard the word “show.” And I was like, “Well, actually, that’s not a bad idea.” So thanks for asking what the bigger story was, because there was none, and now there is! [Laughs.]

You mentioned nostalgia. You don’t seem like the type of person to be nostalgic very often; you always seem to be moving forward, finding the new, creative thing. Is it tough to revisit yourself from 10 years ago?
I thought that it might be but I’ve been having a great time. I didn’t really have to re-learn songs; I just picked up a guitar and found out I remembered them, so that’s been nice. I haven’t been one for nostalgia, but I’ve had so much support through ex-Matches fans with my other projects, and I’ve been able to make a living selling my stuff DIY and making art for other bands and that sort of thing, largely due to that connection with the Matches. Our cult continued on and has supported me. I’m really thankful for the whole experience. There’s a cool camaraderie.

You know, we recorded E. Von Dahl in our friend’s laundry room and all around the Bay Area. That’s where we’ve had the most support. The three Bay Area shows sold out in two minutes and crashed the venue’s website. I don’t know how many more shows we could book in San Francisco, but it feels never-ending. That’s a crazy feeling.

You’ve sold out those three San Francisco shows, and now there are shows in New York, LA and Chicago. Is this it? Are you saying, “If you’re not coming to one of these, you’re not gonna see the Matches”? How quickly should people be cashing in their frequent flier miles?
I think this is it? It’s funny, because I think since this whole thing was built organically, we’re not really saying no. Justin’s gotta keep his job. He’s a concept artist at a video game company—he’s got a rad job. So we can’t let Justin lose his job. [Laughs.] The whole point is for all of us to get together and honor the original record. If one of the guys isn’t available because of school or work or whatever, we wouldn’t do a show. We’re not gonna go out and have a replacement bass player or something. That’s not the point right now.

With all that said, let’s talk about next year. If you had to give a percentage of the Matches playing a show in 2015, what’s that percentage?
We’re gonna see how this goes when we get back together and play together onstage. I’m so excited to be playing again with my friends, and the fans seem to be really receptive and hungry for this to happen—our vinyl pressing sold out in 10 minutes. It’s really exciting. Are we gonna go play 300 shows in a year? No. We’re not doing that. I’m down, myself, and I can’t speak on behalf of the band, but one-off shows, if they’re doable… I dunno. I found all these old song demos we never released; I’m not saying we’re going to release them, but it’s a possibility. There are some E. Von Dahl-era songs that we never put out that nobody’s ever heard. I don’t know if those are interesting to people, or if we should record new stuff… You might get some more acoustic videos. If the response is great on these shows and everybody has as much fun as I think we’re gonna have, I wouldn’t say no to anything. I don’t want to talk myself into a corner! Everything is based on fan response. I’m so into following the path of least resistance: “That sounds fun; hell yeah; let’s do it.”

I like how I asked you for a percentage and you gave me a three-minute answer without a percentage in it.
Yeah, sorry. [Laughs.]

You’ve had the benefit of time to look back on your career; what’s your opinion on the Matches’ career? Are you happy with how the band played out?
I’m really proud of it now. If there’s one thing I wish I could change—and maybe this opportunity to play some shows, this is my chance to get my wish—it would have been to just really look around and be present and enjoy myself in all of it. I think the Matches started out sort of by accident; we didn’t really have the intentions to be a touring band or sell out shows in Oakland. We got really ambitious, and part of that paid off in a great way, because we were really creative, and we experimented with all types of music and different producers and become this weird, arty pop-punk band. But at the same time, we got wrapped up in [the industry]: “You need to play for more people, you need to play for more people, you need to play for more people. You need to impress promoters.” We tried to be bigger than we should’ve been. When I look at the appeal of the band originally—being this sort of homespun, DIY pop-punk band who put on their own shows and make their own clothes—we were like your friend’s band, but your friend’s good band. Our fans liked being around us. As things progressed, there was more of a separation between us as performers and our fans. Even the sound of the music became less like you’re talking to your friends and more sort of ambitiously epic, maybe. I think we always retained that conversational style, but it was really all we were at the beginning. I’m not saying we lost that completely, but it got swept up in us trying to be a bigger band. I think the appeal for our band might’ve been that we were your friend’s band.

In the wake of the Matches, all of these people have supported me, and I feel like I’m friends with and really know the people that have supported us. We’re really similar people, and that’s why our music appeals to them. That’s more apparent than ever to me now. So I’m really excited for a second chance to be around people like me that want to hear this music we made and remember when they were teenagers just like we were when we wrote this stuff.

Are you nervous about these shows?
No, I’m not. My mom always told me the feeling of nerves and excitement are the same thing; it’s just how your mind interprets what your body is feeling.

Musicians always say things like, “We’re so humbled by the response,” but all musicians have an ego to some extent. You had to have assumed that people still cared to some extent and that you would sell out at least one show in San Francisco. So how overwhelmed have you been by the actual support?
You’re right: Our goal was to play a venue that would sell out, but our goal wasn’t to play a venue that we could sell out in two minutes. We thought it would sell out a couple weeks in advance. When we had to add a second show, that was shocking. It felt really neat. In retrospect, we should’ve done the Fillmore. [Laughs.]

You should’ve gone for Bill Graham Civic Auditorium. [A 7,000-capacity arena in San Francisco. —fire marshal ed.]
I think that could’ve been a possibility! I know that sounds crazy, but I don’t know where the end of that Bay Area fanbase is. The other thing we found out once those shows were selling was where the credit cards were coming from, and there were people from all over the States and the world flying to these shows. That might also explain why there is an endless draw, it seems.

E. Von Dahl is not a 75-minute record; have you put thought into what else you might play these shows?
I think the plan right now is the set will be E. Von Dahl front to back, and then we’ll come out for an encore and do the favorites. We’re learning a lot of Matches songs, so we’ll mix up the encores on any given night.

What are the odds of hearing the Spanglish version of “What Katie Said” one more time? Because I’ll buy a plane ticket, Shawn.
[Laughs.] We’re gonna put up a live video of one of the San Francisco shows and put the whole thing up online that week so for anyone who can’t get tickets or couldn’t buy a plane ticket can still watch. If you’re in the middle of Nebraska and can’t get to one of the shows, there will be that option. You can tune in for the Spanglish “What Katie Said.”

So before I let you go, what’s going on with your other band, Maniac?
Jake’s back in Australia right now. We still have some unreleased tracks for the next record, and we’re going to eventually record them, but his visa ran out over here, and my visa ran out over there. The next time I’ll see him is going to be at my wedding in October, and we won’t be recording then. [Laughs.] ALT